Occasionally, as he idled on the sidelines at Real Madrid’s training facility, Iker Casillas would be asked to wheel out his party trick. A coach or a teammate would throw out the date of a game he had played and the name of an opponent: Jan. 5, 2002, Deportivo de La Coruña. Casillas would pause for a moment. And then he would tell them the score.

By his own very specific estimate, he got about 98 percent right. Given the context, it is an impressive success rate. The category “Games Played By Iker Casillas” is a considerable one, even for Casillas himself. His career touched three decades, and two centuries. Between Real Madrid, F.C. Porto and Spain, he racked up more than a thousand games.

In an ideal world, that list would still be growing. Casillas announced his retirement in August, at age 39. He had little choice. In May 2019, during a training session at Porto, he noticed pain in his chest, his mouth and his arms. The club’s doctors took him to the hospital; it was only after he had surgery that he was told he had had a heart attack.

As he recuperated, he thought about returning to the field. He was enjoying his time in Portugal, relishing the “tranquillity” he had found there in the autumn of his career. He was named in Porto’s squad for last season. And a few months after the heart attack, he was back in the gym.

Eventually, though, the medical advice became clear. “The doctors said the best I could do would be to stop,” he said. It is hard for athletes to stand down, to stand aside — it is, as Casillas said, as much an identity as a job — but he is also a husband, and a father of two young children. “There was a risk,” he said. “And if there is a risk, then it would be absurd to carry on.” 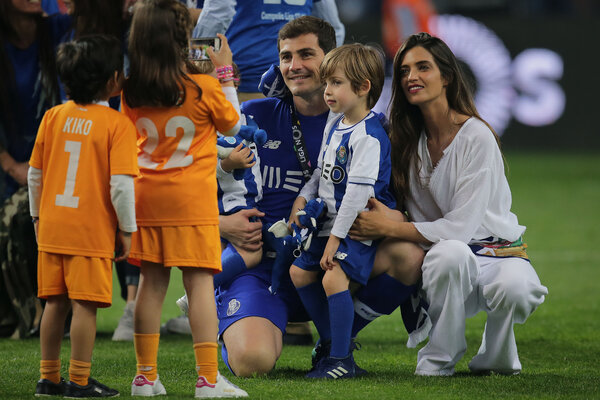 And so, now, all he is left with are his memories: vivid and bright and 98 percent eidetic, and not just for score lines but for sensations, too.

He remembers what he was thinking as he walked up to collect the trophy in Vienna in 2008, the few seconds before Spain was officially crowned European champion, its first international honor since 1964. “We had broken the curse that seemed to have been on Spanish football,” he said.

He remembers how normal the same walk felt two years later, at Soccer City in Johannesburg, after Andrés Iniesta’s goal had turned Spain into a world champion. “It was history, but you do not value it in that moment,” Casillas said. “You think it is normal: ‘We’ve won the Euros, we’ve won the World Cup, we’re a strong team.’”

And he remembers, in 2012, when Spain retained its European crown, feeling as if that team “might have played the Globetrotters or the Dream Team from the 1992 Olympics and we would have won.”

They are all real memories, he said, not ghosts of memories, memories of photographs, composed and layered and compacted over time. It is a blessing, of course, to recall with such clarity all of those high points: the trophies won and the triumphs claimed, for club and for country. But it comes with a curse, too, because Casillas remembers the defeats with no less precision. His memory, after all, works just as well when he would rather forget.

A few days before we spoke, Casillas had retweeted a video from UEFA’s official Champions League account. It was a montage of his performance at Anfield, in 2009, when he captained Real Madrid against Liverpool in the competition’s round of 16. It was not hard to see why they had compiled it: Casillas filled it with a string of spectacular saves, defying Fernando Torres and Steven Gerrard again and again.

What was not mentioned — and what made it curious that Casillas had, effectively, endorsed it — was the score. Liverpool had won, 4-0. Anfield had afforded Casillas a standing ovation, but the crowd, like the goalkeeper, understood that “Liverpool could have scored 12.” Casillas left the field with tears in his eyes.

“It was a face of powerlessness, not rage,” he said. “I was frustrated, sad. It meant it was seven years since Real had reached the final. You can lose a knockout game. We lost the first leg, 1-0. But to lose, 4-0? All of the Real fans in Liverpool, all of the fans around the world — I felt their frustration.” Despite his heroics, he also felt a lot of “responsibility.”

He had felt that responsibility, he said, since he was 8 or 9, since the day he joined his childhood team. He had grown used to it, even started to enjoy it, but it exerted a particular strain on him.

His one-time teammate, Fernando Hierro, used to say that one year at Madrid is like five anywhere else. At times, Casillas said, he felt as if he had been there for half a century. “The pressure,” he said, “is constant.”

Particularly given what he experienced at the height of his career. In the years that he was lifting all of those trophies and breaking all of those barriers for Spain, his club career was consumed by what may — in time — come to be seen as the most intense rivalry soccer has ever seen: Real Madrid against Barcelona; Cristiano Ronaldo against Lionel Messi; José Mourinho against Pep Guardiola and Tito Vilanova.

For four years, the two sides of one of the world’s most ferocious derbies were also the two best teams in the world. What had always been a fierce enmity turned into something darker, more political, more toxic. The Italian journalist Paolo Condo wrote an entire book about the three weeks in the spring of 2011 when the clubs faced each other four times in 18 days, and the whole of the soccer world seemed to stop to watch.

It was, Casillas can say now, “madness.”

“We were not prepared to play four Clásicos in a month,” he said. “There was a lot of tension, a lot of craziness.” The rivalry became tangled in, and exacerbated by, the issue of Catalan independence, and there was a point, Casillas said, when it appeared to be “more politics than football.” All he could hope to do was “not pour gasoline on the fire.”

His position, though, was invidious. He was Real Madrid’s captain. “The club that formed me, that meant so much to everyone around me,” he said. But he was also captain of Spain, of this team that seemed so important to a country still reeling from the effects of an economic crisis, this team that would conquer Europe, and then the world. He felt he had a responsibility to his club’s fans and to the whole country. “You have to do the right thing for everyone,” he said.

It was no wonder, then, that by 2015, Casillas was ready for a change of scenery. His relationship with Real Madrid had changed; he admitted to feeling “alone” at one point, as he was ostracized first by Mourinho and then, later, cut adrift by the club’s president, Florentino Pérez. He saw, in Porto, the chance to find “some peace.”

“I needed to be calm to enjoy it again,” he said. “I didn’t like seeing myself in the press every day, or in the middle of certain arguments. The best option was to leave, even if it was the place where I grew up, the place that was my home, the place where many people suffered with me. I didn’t want that angst. I wanted less fear.”

The stress and the strain, though, do not change the memories. That is what Casillas cherishes from his career: not so much all of the acclaim — praised by no less an authority than Gianluigi Buffon as one of the best goalkeepers of all time — or all of the trophies he won, but all of the things he remembers, and is remembered for.

Soccer, to Casillas, is about memory: not the score lines, necessarily, but the sensations. The players he holds in the highest esteem are the ones who played the most games, lasted the longest — he mentions Paul Scholes and Francesco Totti — the ones who burned themselves into the history of a club.

He likes those moments when fans tell him where they were when Spain won the World Cup, or what they were doing when he came off the bench, barely out of his teens, to win his second Champions League.

“It happens when you go to the park, go to a restaurant, meet someone Spanish when you’re abroad,” he said. “They remember where they were: getting married, or watching it with their son. These moments mark everyone. It is lovely to know that you are remembered.”