OAKLAND, Calif. — Months after Steve Kerr played his last N.B.A. game in 2003, he had a hot take to put out into the world. Then 38, Kerr had just concluded a 15-year career, cementing himself as one of the greatest outside marksmen of all time. He finished as a role player for the San Antonio Spurs, winning a championship ring, the fifth of his playing career. Now, it was time for his second act: dipping his toe into the media.

He penned a column for Yahoo titled, “Creating the perfect shooter.”

“It is a difficult task to identify the best shooter in the N.B.A.,” Kerr began. “If I had to name a few at the top of the list, I would go with Ray Allen, Reggie Miller, Peja Stojakovic, Sam Cassell, Eric Piatkowski, Glen Rice, Pat Garrity, Michael Redd, Allan Houston, and Steve Nash.”

He then set out, like any strong would-be columnist does, to establish his central thesis: “I have decided to create my own perfect marksman, using the best qualities and characteristics from the most proficient shooters in the N.B.A. I call this creation ‘Roboshooter.’ ”

Almost a dozen years later, as head coach of the Golden State Warriors, Kerr found himself with two of them: Stephen Curry and Klay Thompson. In 2016, he received another one when Kevin Durant joined the team as a free agent. 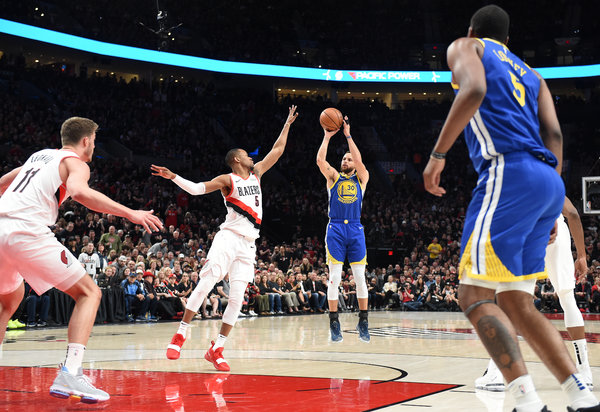 Now, as this assemblage of elite shooters goes for its third consecutive championship, Kerr could only laugh after a recent practice, with Curry shooting nearby, as he read a printout of what he wrote nearly 16 years ago. During the finals, Curry, in particular, has been the center of gravity for Golden State’s offense. Wherever he goes, multiple defenders follow in an often futile attempt to deny him even an inch of space.

“The fundamentals never change,” Kerr said. “I think what’s changed now is the perception of what’s a good shot and what’s a bad shot. Back then, a good shot from the 3-point line was a wide-open shot. Where the game has changed is the range that these guys have now. Not just Steph or Klay, but leaguewide. Every team seems to have three or four guys who can shoot 3-pointers from well beyond the line itself.”

Well, the Warriors did have three or four of those guys. But as they head to Game 3 of the finals against the Toronto Raptors, with the series tied at one game apiece, Kerr may be down to just one Roboshooter: Curry. Durant (calf) is out and Thompson (hamstring) is uncertain as the series shifts to Oracle Arena.

Surely, the game has changed since Kerr described the ideal shooter as one who blends balance, conditioning and “placement of the ball in the shooter’s hands.” But its evolution can no doubt in part be chalked up to Curry’s style of play, which revolutionized contemporary basketball, and Kerr’s ability to harness his point guard’s talents.

What used to be a “bad shot,” as Kerr referred to it — say, a pull-up 3 on a fast break early in the shot clock — became a “good shot” for Curry, because he makes them so frequently. The result is the universal belief that he’s one of the most difficult players to guard in league history. But the revolution is not limited to him. During the season in which Kerr’s Yahoo piece was published (2003-04), the average team attempted 1,224 3-pointers during the regular season. This year, that number was more than double, with an average of 2,625.

Some of Kerr’s writing, however, seems prescient and could apply to Curry and Thompson. For example: “Surfers will tell you that it’s easier to ride a wave than to catch one,” Kerr wrote. “In the N.B.A. it is simpler to make a shot than it is to get one. Defenders are bigger and stronger than ever, and scouting reports are very thorough. A stingy defense can make it very difficult for a good shooter to get a good look at the basket. Therefore, the best shooters not only need to make shots, but to know how to get open, with or without the ball.”

He continued: “Roboshooter will have Allen Iverson’s speed, quickness and ball-handling ability in order to create a shot against a tough defender. It’s amazing how often Iverson will have the ball with the shot clock winding down and a great defender on him and just make a dazzling one-on-one move to clear space for himself to shoot.”

If Kerr were to write the piece today, he said, he might make a few updates. Ball-handling is more important now, particularly for Curry. For Thompson, repetition — meaning shooting the same way every time.

“One thing I really learned from Steph and Klay is that they generate rhythm before the shot. I was really a catch-and-shoot guy,” Kerr said, adding, of Curry: “A lot of times he will build the rhythm for his shot with the dribble. So there’s a flow to his shot that I don’t remember anyone else having in the past.”

Also key now, Kerr said, is a player’s ability to create his own shot.

“The modern game, because of the space and the multipositional versatility guys display, I would only include the guys who can put it on the floor, create their own shot and still be lethal,” Kerr said.

He also offered an update to his list of shooters: “Jamal Murray is on his way to becoming one of those guys. He shoots it, catch-and-shoot, or off the dribble, like Steph.” He went on: “If you want to think more of a ‘Roboshooter’ category, like Klay, Khris Middleton. Beautiful, same shot over and over again.”

And as if Kerr didn’t have enough of a luxury with Curry and Thompson, for the last three seasons, he’s had Durant, an all-time talent as well.

“The ability to shoot from different levels. Catch-and-shoot. Come off a screen and shoot. Create and shoot off the dribble. The perfect shooter in the modern game does those three things. I think we’ve got three guys who do that,” Kerr said.

But there is one aspect of the Yahoo piece that Kerr, as a coach rather than a media figure, would surely disavow today. That would be the column’s kicker.

“Our creation is done and we have finished making the ideal shooter,” Kerr wrote. “And by the way, Roboshooter can’t play any defense. Because like Bill Murray said in ‘Space Jam,’ Roboshooter ‘doesn’t do defense.’ He just shoots.”