Home » Sport » In-Game Video Returns to Baseball, With Some Changes

In-Game Video Returns to Baseball, With Some Changes

The 2020 Major League Baseball season was unlike any other in history: Played amid the coronavirus pandemic, the regular season lasted only 60 games, and some of the game’s best hitters struggled uncharacteristically. Stars such as Jose Altuve, Javier Baez, J.D. Martinez and Christian Yelich each hit .219 or worse.

Perhaps the reason was regression, aging or a smaller-than-usual sample size that yielded weak numbers. But across the league, there was a notable absence of a tool that players had used — and, in the Houston Astros’ case, done so illegally — to help their performances for years: live in-game video.

The decision to eliminate access to the video ultimately stemmed from concerns about the virus, but players had already been warned that it might disappear because of the Astros’ misdeeds.

“To take our game back 30 years, I think you’re not doing it justice,” Martinez told Sports Illustrated last March. “It’s a joke. It’s gotten so ridiculous.”

“I’m really mad that we don’t have it because, to be honest, with all due respect, we didn’t cheat,” Baez told reporters near the end of last season. “We’re not cheating, and we have to pay for all of this.”

No such frustrations will exist ahead of the 2021 season, which will be the traditional 162 games. In-game video has returned, but with some new twists: It will be delayed a bit; the catcher’s signs — which the Astros exploited — will not be shown; and the footage will be available to players and coaches in the dugout and to the bullpen on league-issued iPads rather than in the old replay review rooms hidden from view.

The list of pleased hitters this year is long, from Yankees right fielder Aaron Judge to Mets left fielder-first baseman Dominic Smith to Martinez of the Boston Red Sox.

Access to the replay review rooms was cut off last year because M.L.B. officials, hoping to prevent virus outbreaks, did not want players and coaches gathering indoors and in groups. The players’ union agreed to the health and safety precautions, which included walling off the small replay review rooms set up in the bowels of stadiums, near the dugouts. The rules also prohibited use of communal video terminals in clubhouses.

But this was occurring on the heels of the Astros’ cheating scandal, in which team officials and players illegally used live in-game video to steal the opposing team’s signs and signal to the batter what pitch was coming. M.L.B. Commissioner Rob Manfred disciplined the Astros in January 2020, when their cheating was revealed. And during spring training, before the pandemic led to a postponement of the season, M.L.B. and the players’ union were negotiating new rules governing those rooms, including a proposal to cut off access. That suggestion is what originally drew the ire of players like Martinez.

Martinez, who was 32 last season, hit .213 with seven home runs in 54 games and posted a .680 on-base-plus-slugging percentage, his lowest mark since 2013. During his All-Star seasons in 2018 and 2019, he hit .317 with a .985 O.P.S. and averaged 40 home runs a year. Martinez, a batting cage addict, told reporters last season that the absence of in-game video affected his ability to make real-time adjustments to his swing and that he could not tutor struggling teammates as he had before. 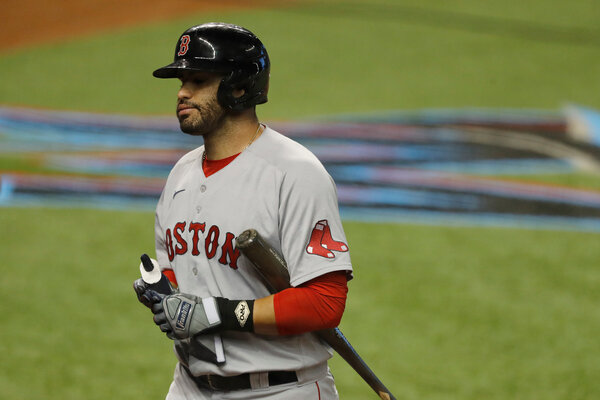 Judge, who is also a big proponent of live in-game video, last season leaned on his teammates’ naked-eye feedback more than ever. Players were still allowed to use M.L.B.-issued iPads before, during and after the games, but the application had only footage and data loaded before the first pitch.

During an M.L.B. technology presentation last week, Chris Marinak, the league’s chief operations and strategy officer, reiterated that in-game video was removed last season for health reasons, not because of the Astros’ scandal. The league, he said, also was not ready to offer the options it has now.

Marinak said M.L.B. had listened to players who said the lack of in-game video hurt them last season. And while the league was building its new in-game video system over the winter, Marinak said, officials also had the Astros’ sign-stealing problems in mind.

The result, according to M.L.B.: The iPad application with in-game video will be controlled by the league office and the iPads have been configured so that they can be used for no other purpose. Video is uploaded automatically at the end of each half inning. M.L.B.’s advanced video technology, Statcast, is trained to clip the footage so it shows only a second or two before the pitch is delivered, thus not revealing the catcher’s signs. In the app, players and coaches can toggle between different camera angles and advanced data, such as a hitter’s launch angle or a pitcher’s spin rate.

Coaches were just as thrilled as hitters about the return of in-game video. During an appearance on M.L.B. Network Radio in August, Tampa Bay Rays Manager Kevin Cash vented frustration about its absence.

“Video is what makes us good,” he said. “It helps us learn. It helps us coach. It helps us attack. And it’s been taken away from us because of a couple of teams’ stupid choices.”

Marcus Thames, a former player who is entering his fourth season as the Yankees’ hitting coach, said teaching players would be much easier with real-time video handy. Smith, 25, said in-game video could also provide a mental boost: helping hitters feel more at ease by offering visual validation of what they were thinking at the plate.

A fair number of hitters may not notice the difference because in the past they had shied away from visiting the video room during a game. Clint Frazier, the Yankees left fielder, said he didn’t even watch much of the allowable video before or after games last season.

“I’m a person that kind of overanalyzes too much in there,” Frazier, 26, said of the old video rooms. He said he relies far more on what he feels, rather than what a replay can show him.

Still, Frazier said he might peek at in-game video now that it is back. So might Kyle Hendricks, 31, the Chicago Cubs’ ace who said he had previously used it “every once in a while.”

Although pitchers may not rely on in-game video as much as hitters do, some welcomed its return because it allows them to better understand the strike zone of that game’s home plate umpire, as well as their own mechanics. Hendricks, though, said he appreciated that the visual tool was back because of the benefits for his team’s batters — and even for opponents.