HONG KONG — Aeng Khang understood at an early age that playing any sport, much less one as raucous as rugby, would be nearly impossible for girls from her remote village in Laos. As teenagers, many would be expected to marry and leave school to work on the family farm.

“If you went to play sports, they’d say, ‘That’s a girl who wants to be a boy’ or ‘That’s a bad person,’” said Khang, 22, who left school at age 13 to help her parents on their farm so they could finance her older brother’s college education.

Khang took up rugby anyway, as a high school freshman, after the Lao Rugby Federation introduced the game to her home province in the country’s remote northeast. Now she works for the federation and represents her Communist-ruled country by playing in tournaments and exhibition matches around Asia.

“I’m not the sort of person to just sit around waiting for my husband to come home,” Khang, who married two years ago, said during a recent trip to Hong Kong for a round of matches. “And since I play on the national team, I get to travel.”

The federation, which was started in 2001, has grown to more than 4,000 players from about 300 over the last five years, and the majority are women. At the end of last year, close to 52 percent of the federation’s players and 54 percent of the coaches were women, said Megan Knight, a former player on the United States women’s junior national team who works for the Lao federation. 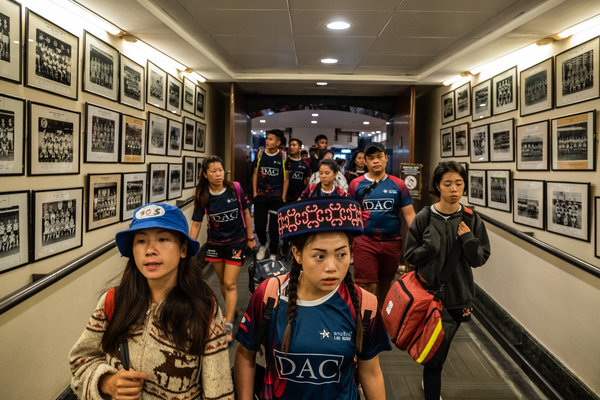 And the women’s national team, established in 2007, punches far above its weight. It has beaten Indonesia, Malaysia, the Philippines and other countries. Some of its stars have become minor celebrities in their hometowns.

“Laos is the only country I’m aware of where rugby is associated with being a female-focused sport,” said Ada Milby, the only woman on the 12-member executive committee of Asia Rugby, the sport’s governing body in the region, and a former captain of the Philippines national team.

The government controls the Lao Rugby Federation, but it is financed by the ChildFund Australia, a charity dedicated to reducing poverty among young people around the world, and also by private and corporate donors, mostly in Hong Kong.

Chris Mastaglio, the Asia Pacific director for ChildFund Pass It Back, the arm of the organization that pairs rugby development and “life skills” education, attributed the proportion of female recruits in Laos in part to the fact that virtually none of the country’s youth had played the sport before, so boys lacked the pre-existing “physical literacy” they tended to have in other sports.

“Nobody knew anything,” Mastaglio said, “so everybody was at equal disadvantage.”

Rugby was played for decades in Laos before the Communist takeover of 1975. The sport went dormant for years afterward as the country recovered from war and political upheaval, but expatriates reintroduced it in the mid-1990s.

Pisa Vongdeuanpheng, the coach of the Lao men’s and women’s national teams, said that he began playing rugby as an 11-year-old on a club formed by expatriates. He found them by chance: His mother worked as a maid in the home of one of the team’s English players.

“He saw me play football all day, and then one day, he just threw the boots on me and said, ‘Let’s go play rugby,’” Vongdeuanpheng said. “So I went.”

But even as youth rugby grows in Laos, a nation of about seven million people, players and coaches face steep obstacles.

Many of the federation’s players come from ethnic-minority communities that typically encounter systemic discrimination, such as the area where Khang lives, which is predominantly Hmong. In keeping with the ChildFund mission, the program recruited heavily in such communities, in Laos and in neighboring Vietnam, because they have high rates of poverty.

Just over half of the federation’s players, including Khang, come from Xieng Khouang, a mountainous province that was among the most heavily bombed in Laos by the United States military during the Vietnam War. Much of the ground there is still contaminated by unexploded ordnance.

As a result, fields typically must be certified as safe by bomb-disposal technicians before athletes can play on them. And because even ordnance-free land tends to be too rocky for tackling, most matches are touch only.

Tackling is permitted on only three fields in all of Laos, and the only one in Xieng Khouang is a four-hour ride from where most of the province’s rugby players live, said Knight, the Lao Rugby Federation employee.

Female players also face entrenched resistance from their communities, Knight said. Many quit after marriage, she said, and live in places where substance abuse and violence are common.

“We have problems coming up every day, all day,” Khang said.

In 2014, a United Nations-supported survey of violence against women in Laos found that nearly a third had been abused physically, sexually or emotionally by their partners, usually husbands. The country’s Justice Ministry called the problem a “scourge.”

In a country with threadbare social services, Lao coaches say that the rugby federation is valuable because it helps players find counseling and other resources, as well as develop traits they did not realize they had.

At the same time, women with no previous athletic experience have blossomed into crafty scorers, crisp passers and ruthless tacklers. Opposing teams routinely underestimate them.

Just before a recent Lao exhibition match against a New Zealand club team in Hong Kong, for example, some of their opponents were sleeping on the sideline.

“See that?” Vongdeuanpheng told his players, who normally compete in the sevens format. “They’re not warming up. They think they’re going to beat us.”

In a tens format match the next day, Laos faced a Hong Kong club team that had won its matchup in each of the previous three years. Before kickoff, a Scottish announcer at the site said over a loudspeaker that he hoped Laos would manage at least one try, which is roughly equivalent to a touchdown in American football.

Once the Lao team had a 15-0 lead, he and the announcers revised that outlook.

“When we started the commentating and said we hoped this is going to be a competitive game, I didn’t think it would be this way ’round,” the Scottish announcer said.

“I don’t think many people did,” his Australian colleague added sheepishly.

Hong Kong eventually clawed back to within a few points. But for most of the second half, the Lao women stood their ground. One announcer described their defensive tackling as “absolutely ferocious.”

Hong Kong scored a try on the final play. But when a kicker attempted a 2-point conversion, the ball clanged off the goal post and tumbled to the ground.

The Lao women had won again.