Home » Sport » Injured Proud will still be an inspiration for Swifts

Injured Proud will still be an inspiration for Swifts

NSW Swifts  star Paige Hadley made it clear that  Maddy Proud would still be considered the team’s true leader even though she will miss the rest of the season through injury. 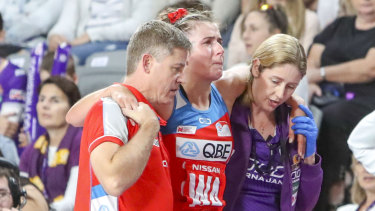 Devastated: NSW Swifts captain Maddy Proud is helped off the court on Sunday after injuring her knee.Credit:AAP

Proud ruptured her anterior cruciate ligament in last Sunday’s comprehensive victory over the Queensland Firebirds and will undergo surgery next week.

The sight of her teammates shedding tears for her after the full-time siren was a remarkable reflection of her standing.

Hadley  is the Swifts vice-captain and it is expected she will assume the leading role, but she was adamant Proud would still be regarded as the team’s heart and soul.

If it’s from the sideline – or wherever – she’s been an inspiring leader for us in the opening part of the season.

“Nothing has been decided yet,” said Hadley of the captaincy. “But for us, ‘Mads’ will lead this club no matter what. If it’s from the sideline – or wherever – she’s been an inspiring leader for us in the opening part of the season.

“I want her there. I want her leading, and if I’m the on-court captain she’ll be there, every second of the game with us.”

Hadley said the outpouring of emotion after the match demonstrated how close the Swifts are.

“That reaction would’ve happened for anyone in her position,” she said. “This team is so close. Every person is integral to this team. We’re best mates on the court; best mates off it.

“That’s the power of our culture; we’re one.”

Maddy Turner revealed the reason why she couldn’t hide her distress with the cameras rolling on her after the match was because she felt heartbroken.

“I’ve known Mads for I don’t know how many years, but she’s an unreal person and when you see something like that happen to someone like her it cuts deep," Turner said.

“For her to be in tears was devastating. But she’ll be back – anyone who knows Maddy will tell you she can’t be silenced.”