Home » Sport » Is this heaven? Aussie’s White Sox will face Yankees at the Field of Dreams

Is this heaven? Aussie’s White Sox will face Yankees at the Field of Dreams

Australian Chicago White Sox pitcher Liam Hendriks has a checklist for the team’s trip to Dyersville, Iowa, for the Field of Dreams game against the New York Yankees on Friday morning (AEST).

“I want to do my own ‘Shoeless Joe’ kind of feeling, walk through the corn to the actual field,” Hendriks said. “There’s a 100 per cent chance I’m going to get lost in the [corn] maze [next to the field]. I may need to have a flare gun in case I get lost and I need to start pitching.” 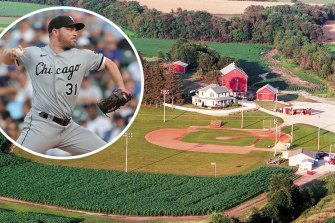 Liam Hendriks (inset) is looking forward to the Field of Dreams game. The field from the movie, pictured, was too small to be used for a major league game so a stadium has been custom built.Credit:Getty Images

More than three decades after Field of Dreams became a hit, one of the most famous cornfields in Hollywood history finally gets the opportunity to host real big league ball.

“Is this heaven?” the ghost of John Kinsella asked in the movie.

“No, it’s Iowa,” dutiful farmer Ray Kinsella – played by Kevin Costner – responded to his father with a smile before they played catch under the lights in the movie’s most poignant scene.

This week, it’s not fiction. The Yankees will play the White Sox next to the actual site used in the 1989 film and a crowd of about 8000 is expected, a year after the pandemic postponed the original plans to play at the specially built field. 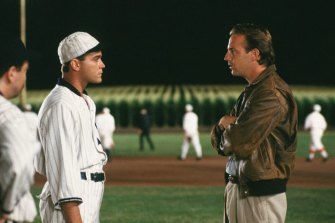 Kevin Costner and Ray Liotta in Field of Dreams.

Count Hendriks, a relief pitcher, among those eager to participate.

“I’m excited,” Hendriks said. “It’s not every day you get to be the first-ever major league game in a state. That’s kind of cool. Hopefully I don’t suck and give up the first homer in the state of Iowa.”

The game is a one-off – the second and third games of the series will be at Guaranteed Rate Field in Chicago.

“I love these events,” Hendriks said. “I don’t mind the extra travel and everything like that. This is a fun experience for me. I got to experience the Japan Series in 2019 when I was part of the A’s, and this is just another one to put a feather in the cap and get the chance to experience some things that are a little bit different in this game, break up the monotony of every day.”

White Sox manager Tony La Russa will miss the game to attend his brother-in-law’s funeral, but said his team was excited to play there.

“Field of Dreams is a great movie, embraces all about family and [what] the game is all about. A very special opportunity. Our guys are really excited to be there. I’ve seen some of the comments already. Should be a great day for the White Sox,” he said.

Both teams will wear throwback uniforms hearkening back to 1919, when “Shoeless Joe” Jackson played for the White Sox and was one of eight players banned for fixing the World Series. The history of that team is one of the many themes woven into a film that transcends sports.

Dwier Brown, who played John Kinsella in the movie, never imagined a scenario like Thursday would ever play out.

“It’s unbelievable,” Brown said. “When you’re making a movie, particularly one like that and you have a role that has five pages in the script, you don’t expect much of anything except hopefully your paycheck. To think that I’m talking to you guys about this with some All-Star players [such as Hendriks] is just amazing, 33 years later. It just keeps giving and giving.”

He plans to be in attendance.

“It’s been an amazing thing,” he said. “A certain amount of people, they look at me strangely from across the room and come over and tell me some amazing story about how that movie changed their relationship with their dad.

“To me, that’s what I became an actor for, to possibly be in some movies that made a difference in people’s lives. I feel honoured to have been a part of it.”

Hendriks had fond memories of watching the movie when he was younger.

“I don’t think it matters what the actual genre was about, if it had Kevin Costner, Ray Liotta or James Earl Jones, you were getting it in Australia,” said Hendriks, who was born in Perth. “I remember watching it as a kid and really didn’t understand baseball, just saw a bunch of ghosts running around and I thought it was kind of cool.”

The temporary ballpark’s bullpens, where the pitchers warm up, will be located behind the 12-foot-high padded wall in centre field and are designed to resemble old Comiskey Park, the White Sox stadium from 1910-1990.

Hendriks sees the event as “good for the game of baseball”.

“I love going to different things,” he said. “I was in Iowa playing in the minor leagues. I’m always interested in doing the games where they have a specific meaning behind it. Something that adds that little character to the game.

“You get the chance to go to a place where you may not have visited. I’m excited about running through the cornfields because who wouldn’t be. There are certain things that resonate with a game like this. This is possibly a once-in-a-lifetime opportunity to be able to play in one of these games. It’s different and it’s fun.”

Aussie’s, heaven?, Is, This, white
Celebrities