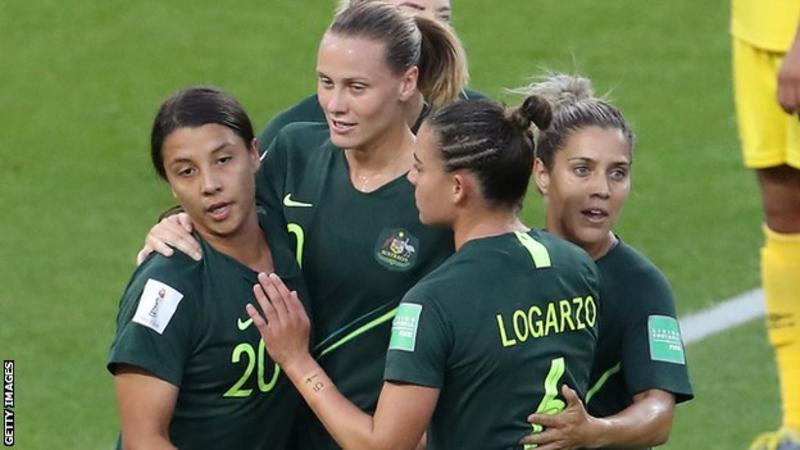 The striker nodded in twice in the first half to make it four headed goals in five and poked in the third after the break, before she punished Jamaica keeper Nicole McClure’s terrible error.

The substitute took the ball around Lydia Williams and slotted home.

Kerr and Australia were excellent but Hue Menzies’ side had the backing of the crowd and leave France following their best display of the tournament.

The spirited Reggae Girlz went behind in the 11th minute when the Chicago Red Stars forward converted Emily Gielnik’s delivery and then produced another good finish from Katrina Gorry’s ball.

Jamaica had, by that point, conceded 10 goals in three games without reply, but that statistic changed four minutes after the restart.

Forward Shaw, who played in a deeper midfield role, was key to her team’s improvement after the break. She provided the threaded pass for Solaun, who took the ball around the Australia keeper Williams and fired in between two defenders.

Shaw had two good chances to test Williams herself but fired wide before Kerr all but ensured Australia of victory when she fired in after the ball bounced off the thigh of Sashana Campbell.

And Kerr drew level with USA’s Alex Morgan on five goals when she tapped in after McClure kicked air in attempting to clear from a backpass.

Australia finish Group C in second spot, behind Italy and ahead of Brazil – all on six points. 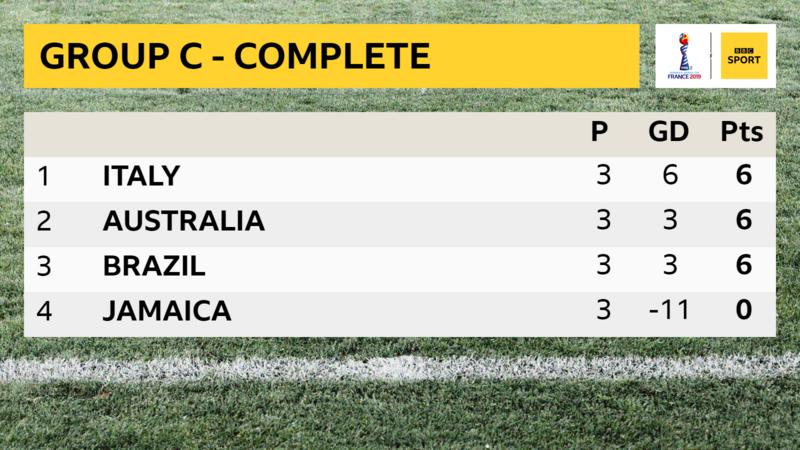 Alanna Kennedy (Australia) hits the bar with a header from the centre of the box. Assisted by Ellie Carpenter following a corner.

Konya Plummer (Jamaica) wins a free kick in the defensive half.

Attempt saved. Khadija Shaw (Jamaica) right footed shot from outside the box is saved in the top centre of the goal.

Delay over. They are ready to continue.

Delay in match because of an injury Chloe Logarzo (Australia).

Emily van Egmond (Australia) is shown the yellow card for a bad foul.

Khadija Shaw (Jamaica) wins a free kick in the attacking half.

Toriana Patterson (Jamaica) wins a free kick in the defensive half.

Konya Plummer (Jamaica) is shown the yellow card for a bad foul.

Konya Plummer (Jamaica) wins a free kick in the attacking half.

Chantelle Swaby (Jamaica) wins a free kick in the defensive half.

Attempt missed. Khadija Shaw (Jamaica) right footed shot from the right side of the box is high and wide to the right. Assisted by Havana Solaun.

Attempt missed. Khadija Shaw (Jamaica) right footed shot from the right side of the box misses to the left. Assisted by Havana Solaun.

Attempt missed. Caitlin Foord (Australia) with an attempt from the left side of the six yard box misses to the left. Assisted by Emily van Egmond with a cross following a corner.

Attempt missed. Khadija Shaw (Jamaica) header from the centre of the box is close, but misses to the right. Assisted by Deneisha Blackwood following a set piece situation.

Attempt missed. Khadija Shaw (Jamaica) right footed shot from the right side of the box is high and wide to the right. Assisted by Cheyna Matthews.