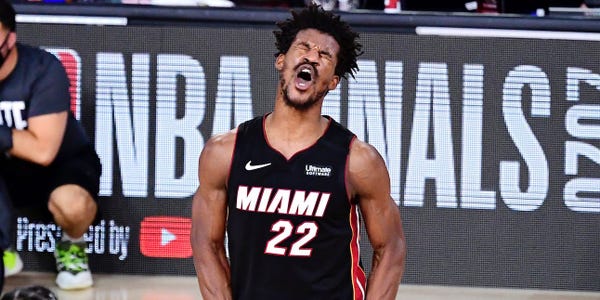 Jimmy Butler willed the Miami Heat back into the NBA Finals and got the last laugh on Sunday with one of the all-time great single-game performances in league history.

Butler is just the third player to ever record a 40-point triple-double in the Finals — LeBron James and Jerry West are the only other two players to do so.

After scoring a driving layup with 1:13 remaining in the fourth quarter to put the Heat up nine, cameras caught Butler yelling the Lakers were "in trouble" as L.A. called a timeout.

After the game, Butler told reporters that he did indeed say "They're in trouble," and said that LeBron James had said it to him first in the first quarter.

"We're not gonna act like I'm just out there talking trash, because I'm not" Butler said. "'Bron said it to me at the end of the first [quarter]. That's what happened. I just said it to him in the fourth quarter."

Butler later added: "LeBron has got the best of me way too many times. I respect the guy for it but this is a different time now, a different group of guys around me."

Butler even got approval from his former teammate, and James' good friend, Dwyane Wade:

The Lakers played a sloppy game, with 19 turnovers. Anthony Davis was hampered by foul trouble and finished 16 points and 5 rebounds in 33 minutes.

But a 2-1 series is far different from a 3-0 series. The Lakers said they were confident in their ability to play better in Game 4, but the Heat have reason for optimism, too. They have now won or tied the last six quarters, dating back to the second half of Game 2, and there's a chance that All-Star center Bam Adenayo could return to the floor for Game 4.

Butler told ESPN's Rachel Nichols after Game 3: "I think we realized that we belong. They can be beat."

Heat coach Erik Spoelstra may have said it best after the game, censoring himself:

"How else do you say it, but Jimmy 'effin' Butler?"