For the past 48 hours, Kyle Chalmers just wanted to go home. Instead, he went big, taking it coast-to-coast for an emotional triumph in the 100m freestyle, then celebrating with a ‘shoosh’ to those he feels have gone out of their way to rain on his parade.

Victory in Birmingham was rewarding on twin fronts for Chalmers. Lost amid a blitz of controversy was the fact he butters his bread as an elite racer. This result saw him go one better than the 2018 Games on the Gold Coast, where he was pipped into silver as the defending Olympic champion. 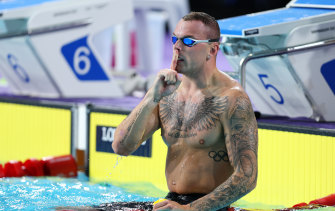 This time he left nothing to chance. After peeling off a Games record 47.36s in the semi-final, Chalmers bossed the decider to touch in 47.51s ahead of England’s Tom Dean, the 200m Olympic champion, and Duncan Scott, who upstaged Chalmers in this event four years ago.

Of course, times mattered little given the context of the race. Chalmers had become a walking headline after being accused of snubbing former girlfriend Emma McKeon following a relay triumph, and being the catalyst for a rift down the middle of the Australian squad.

He bit back hard in a defiant press conference, but the saga wasn’t without consequence. He said his mental health was at rock bottom and would rather be in a taxi to the airport than on the blocks at the Commonwealth Games.

Victory was ‘bittersweet’, Chalmers said, and his ability to enjoy the moment had been diminished. 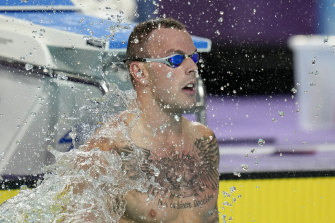 Chalmers went one better than on the Gold Coast four years ago, where he went in as the defending Olympic champion.Credit:AP

“Instead of probably enjoying the moment, it’s a big sense of relief. It’s nice to get the win, I hope it’s able to inspire a lot of people at home who are going through similar things. For me, I just hope nobody has to go through what I went through over the past 48 hours,” Chalmers said.

“It is special. Four years ago, I came second by such a small margin. It’s something that motivated me for a long period of time. It’s not my best swim, not my best time, but that doesn’t really matter in the end. What matters is getting the gold medal. It’s just a big relief I was able to do it.”

Chalmers projects the image of the alpha athlete but the past few days have shown him to be anything but the unbreakable tip of the Australian swimming spear. He said he was almost reduced to tears when getting the race plan from longtime mentor Peter Bishop.

“I was speaking to my coach before the race and I almost started crying. I’m not an emotional person,” Chalmers said. “This has really set me back a lot. I really don’t know what’s next for me. 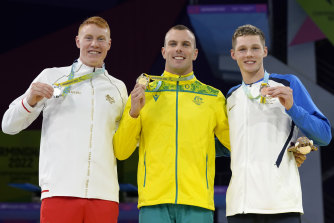 “I’m on a high from racing now but tomorrow when I wake up or when I fly home, there will be plenty of different emotions. I really don’t know what’s next. It’s been overwhelming.”

The last image from the night will be of Chalmers holding his finger to his lips after he turned around to see his name flash up on top of the big screen. It was a pre-planned gesture, he confirmed, designed to not only silence any critics but reinforce the power of speaking out.

“It was something I’d thought about. I had envisaged doing a bit more of a powerful celebration after a win but that was a special one. It probably means more than a fist pump. I hope that sends a powerful message.”

The turnaround in the public perception of Chalmers in such a short space of time has been nothing short of remarkable. Only a few days ago, he was depicted in some quarters as a petulant, divisive figure within the Australian team environment, running his own race at the expense of others.

Now he’s a pin-up boy for the power of speaking out and the latest torchbearer for athletes ready to wear their mental health concerns like armour, continuing a movement that redefined the conversation at the Tokyo Olympics.

He may swim on until Paris, he may not. At this stage, Chalmers has no real clue what comes next, in or out of the water. But he spoke of its redeeming, calming qualities, a sure sign he can remain a thunderous force in the pool if he can reconcile racing with the external noise and scrutiny that accompanies success.

“My dream has been to win in Paris, my shoulders feel good, it’s just how long the mind can hold on. My safe spot is the pool. Even this morning when I’m feeling down and out, getting in the pool and swimming 1500m is just like meditation for me,” Chalmers said.

“But if I have to keep going through a similar thing, I won’t last until Paris, it’s not what I swim for. It’s hard for people at home who are getting their kids into sport, why would you want to put your kids into a sport that’s not safe.

“We swim to inspire people, I see sport as a community that brings people together from all walks of life. I’m a big sports fan, a big Port Adelaide fan, I see groups of people who would never speak to each other on the street coming in to support that one team.

“That’s how I want my sport to be as well, support and feeling safe and inspiring people. If I feel that, I’ll continue and see what happens over this next period.”

Chalmers now owns seven Commonwealth Games gold medals and joins Jon Henricks, Mike Wenden and John Devitt as the only Australians who have owned both the Olympic and Commonwealth 100m freestyle titles.

Get all the latest news from the Birmingham Commonwealth Games here. We’ll be live blogging the action from 4pm-10am daily.