Home » Sport » Leonardo broke his back at Pipeline. Now he’s back surfing and a face of Gucci

Leonardo broke his back at Pipeline. Now he’s back surfing and a face of Gucci

Italy’s first professional surfer learnt his craft catching the whitewash of his local 4pm ferry, possibly the nation’s only break that can be relied upon each and every day.

He learnt how to dress first from his mother Serena, then the CEO of Gucci.

And Leo Fioravanti learnt to get back up after being pulverised against the volcanic Hawaiian reef at Pipeline. Surgeons told him a centimetre or two the other way and his broken back could have paralysed him for life.

Fioravanti is in town for the GWM Sydney Surf Pro at Manly beach, a trickle of swell dialling the event’s opening few days down for all but the longboarders, the Italian’s mood doing none of the sort.

This is his second outing since falling victim to the World Surf League’s controversial new mid-season cut, where the men’s Champions Tour field drops from 36 competitors to 24 – and the women’s from 24 to 12 – joining high-profile casualties Sally Fitzgibbons and Owen Wright in the second-tier Challenger Series.

Fioravanti “surfed angry” last week at Snapper Rocks in response. Hard to picture when the beaming 24-year-old relives the moment he took off too late and too deep, taking the lip of a Banzai brute and bouncing face-first into the Pipeline reef seven years ago. 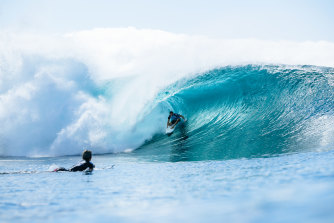 Leonardo Fioravanti in action during a competition in Hawaii.Credit:WSL

“My first thought? When can I surf again,” he says. “I’m serious. I knew it was bad, and man it hurt, but when you love something so much, the injury and pain was almost irrelevant. It was all about when I could get back.

“Once the pain went away, I knew surfing could’ve been taken away from me. I was never going to take it for granted again.”

Serena had watched her son’s eye-watering wipe out via webcast in the middle of the European night, horrified as Fioravanti managed to swim to the surface before being pulled out of the water and stretchered up the beach, family friend and mentor Kelly Slater providing updates down the phone line.

“The pain was like nothing I’d ever experienced before. But as a young kid, I’d had things pretty cruisy to that point so it was a good thing to learn that things don’t always come easy in life. That injury taught me a lot, I’m glad it happened.”

If Fioravanti sounds cut from a different cloth, it’s because by all accounts he truly is, and proudly so.

Such is the lot of Italy’s first pro surfer, out the other side of an eight-month recovery from his Pipeline injury, and several others, before qualifying for the Champions Tour in 2019.

Fioravanti at the Gucci Fashion show in Milan in 2020 Credit:Getty

Being unceremoniously bumped from the top tier after last month’s Margaret River Pro doesn’t sit well with him.

“I don’t agree with the mid-year cut but that’s what the WSL want to do, and at the end of it all, I wasn’t consistent enough to stay in it, and that’s on me, and nobody else,” he says.

But there’s more to Fioravanti’s life too, and what might be the true prize in a CV that includes an Olympics jaunt last year in Japan and fluency in five languages (Italian, English, French, Spanish and Portuguese).

“Fashion Week 2020, just before the pandemic actually, I was named as best dressed man… hang on I’ll get the photo.”

And there he is. Leo Fioravanti: International man of Mystery, Milan 2020, making a mustard turtleneck sweater look good.

He’s been a Gucci ambassador for five years now, and counts CEO Marco Bizzarri, the man credited with boosting annual sales by almost €6 billion between 2015 and 2019, and his family as good friends.

“It’s a different world, I love it,” Fioravanti says.

“In our world you get judged a lot for your surfing style, who you sponsor with or whatever and that’s how it goes. But in fashion, you can be whatever the f–k you want to be.

“Now if I’m going to a Gucci show, give me the craziest shit you’ve got. It’s so cool, and I know they’ll never judge you for it. Give me different every time.”

The GWM Sydney Surf Pro runs from May 18-24 at Manly Beach and is free to attend.