Doctoring baseballs with foreign substances to increase spin and movement has been around for as long as baseball has been played. To try to combat the practice, Major League Baseball is going high tech for the 2021 season, adding spin rate analysis to its arsenal of methods for detecting changes and enforcing existing policies.

In a memo distributed to teams on Tuesday, Michael Hill, a senior vice president for baseball operations, detailed the enhanced monitoring process. There will be increased scrutiny of club spaces, inspection and documentation of balls taken out of play and, in the biggest change from previous methods, the league will use Statcast data to compare spin rates for players who are suspected of doctoring balls, checking to see if the numbers for the game in question differ significantly from their career norms.

Umpire enforcement on the field will stay consistent with past practices, according to Hill’s memo. “The foregoing enhanced monitoring measures, however, will provide the commissioner’s office with a separate evidentiary basis to support a finding that a player has violated the foreign substance rules,” he said.

The spitball and other so-called freak deliveries were banned from the sport in 1920, with pitchers initially given one year to adjust to the change before the rule was adjusted to allow “registered” spitball pitchers to finish their careers without changing. But foreign substances like spit, petroleum jelly, pine tar, rosin and sunscreen lotion continued to be used regardless of rules, and enforcement has been spotty at best. 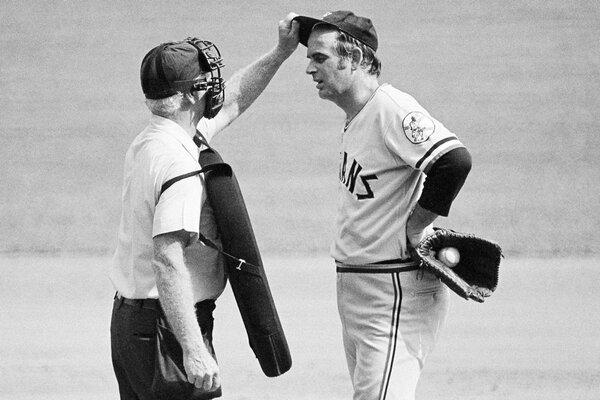 In perhaps the most extreme example of baseball’s indulgence of the act, Gaylord Perry, a star right-hander, was so synonymous with the doctoring of balls that his 1974 autobiography was called “Me and the Spitter.” The confession did not derail him, as he continued to pitch until 1983, won 314 games and was elected to the Baseball Hall of Fame in 1991.

M.L.B. has recognized the need to improve the grip on baseballs in recent years, and has studied how a stickier ball would perform. With the adjusted policy in place, the league hopes to have better data, while also letting players know that it is monitoring the situation.

The topic of doctoring baseballs came to the forefront this off-season when a former visiting clubhouse manager for the Los Angeles Angels who had been fired by the team filed a lawsuit in which he claimed to have helped Gerrit Cole of the Yankees, Justin Verlander of the Houston Astros and several other pitchers obtain ball-gripping substances. The suit, in which the clubhouse manager claimed to have text messages from Cole asking for a substance to use on baseballs, was eventually dismissed by a federal judge.

“It’s an ongoing legal issue, and I am not comfortable talking about it now,” Cole told reporters shortly before the case was dismissed.

The memo from M.L.B., which came after teams for years had been expected to police the situation themselves, gives specific guidance on club employees’ responsibilities in regard to ball-doctoring substances. It says fines and suspensions could apply to activities including, but not limited to, handling foreign substances, advising a pitcher how to use or otherwise mask the use of foreign substances, interfering with the collection of game-used baseballs and failing to report observed violations of these rules by players or staff.

It also said that club leadership could be held accountable for the actions of staff members.