JACK GREALISH said the chance to play in the Champions League was one of the main reasons he joined Manchester City this summer.

And what a way for the £100 million ace to announce himself – taking centre stage in a nine goal thriller. 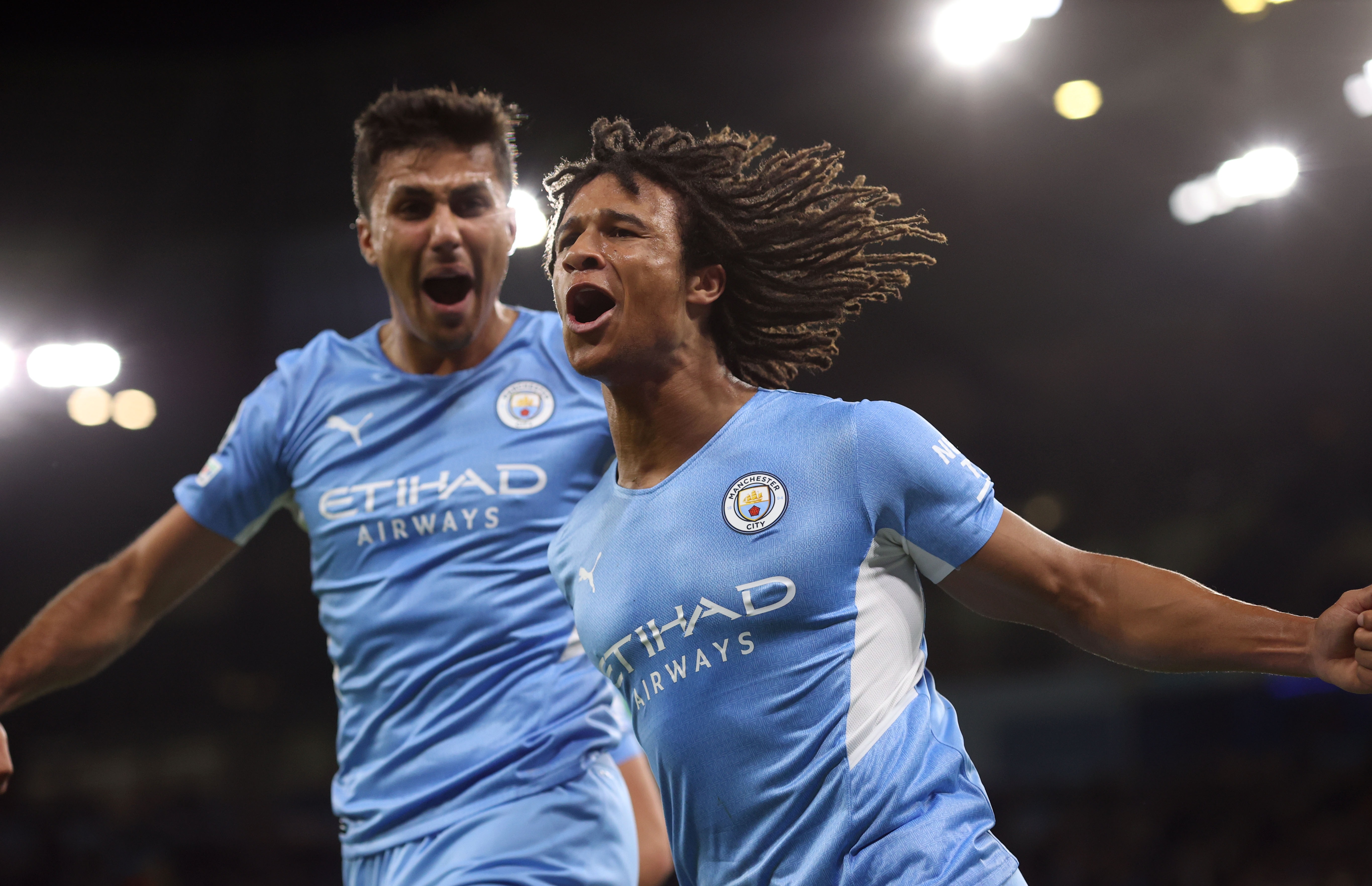 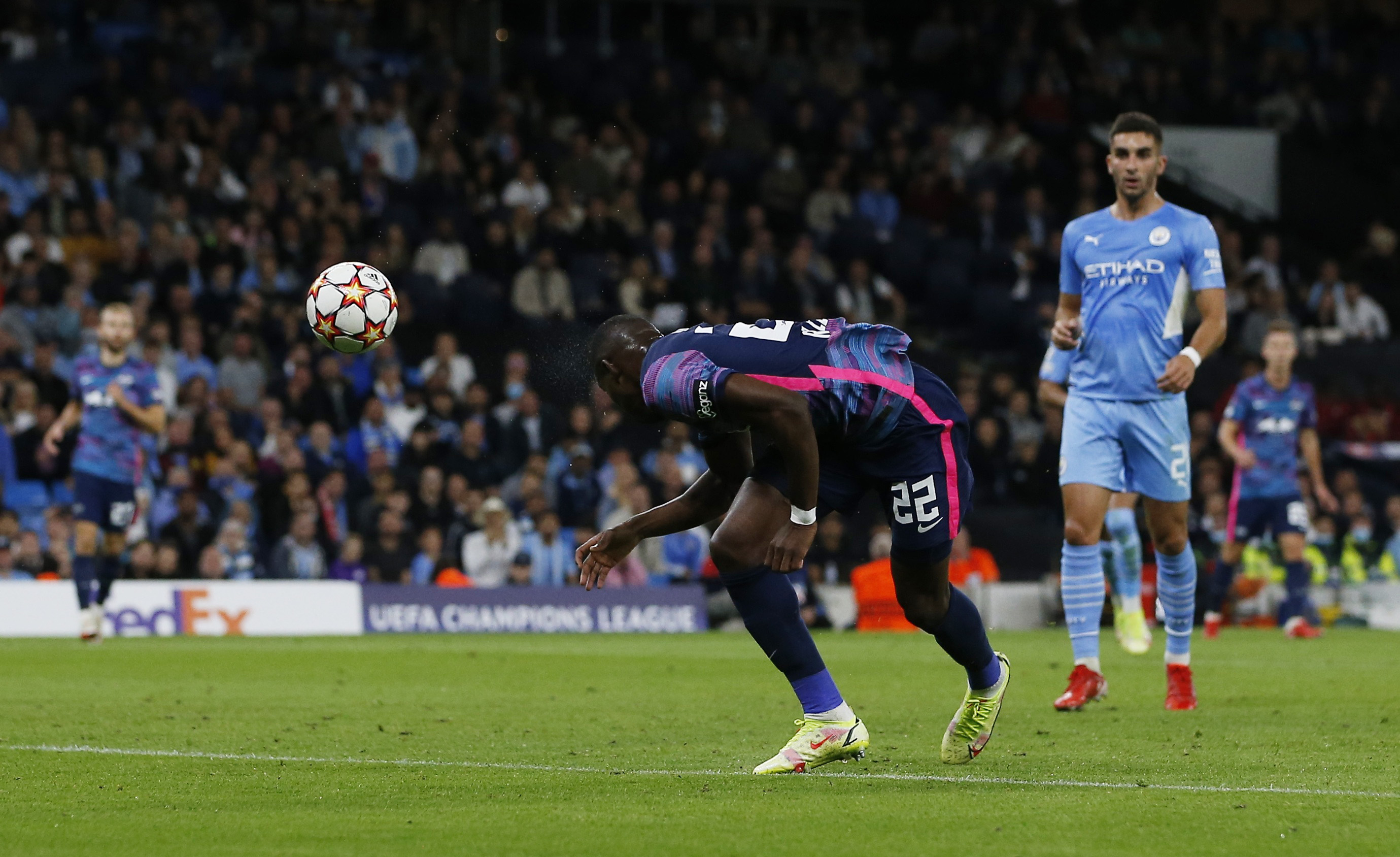 The former Aston Villa captain lit up the Etihad with a second half stunner just when it looked like Leipzig could get back into it.

He also had a hand in a couple of others before leaving the stage late on to a standing ovation from his new fans.

Another goal-fest for the home crowd and what a night to mark Pep Guardiola’s 300th game in charge. His latest tilt at European glory had got off to the perfect start.

Spare a thought though for poor old Christopher Nkunku. The French ace scored a hat-trick for the visitors but still ended up on the losing side.

When the draw was made last month, Leipzig looked like they could provide a tricky test for last season’s beaten finalists.

After all, they effectively put Manchester United out of this competition by beating them in the final group game last term and reached the semis two seasons ago. 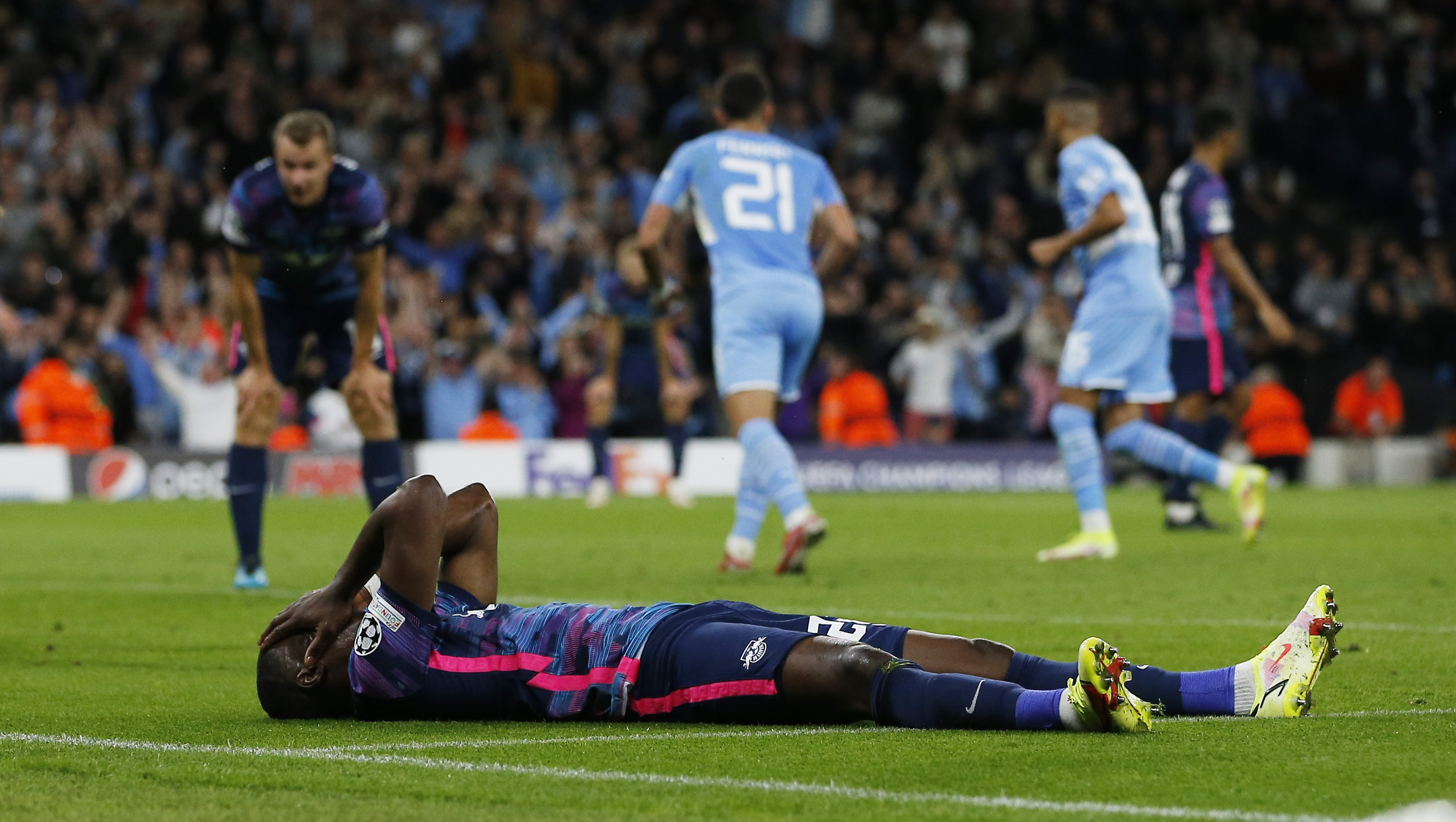 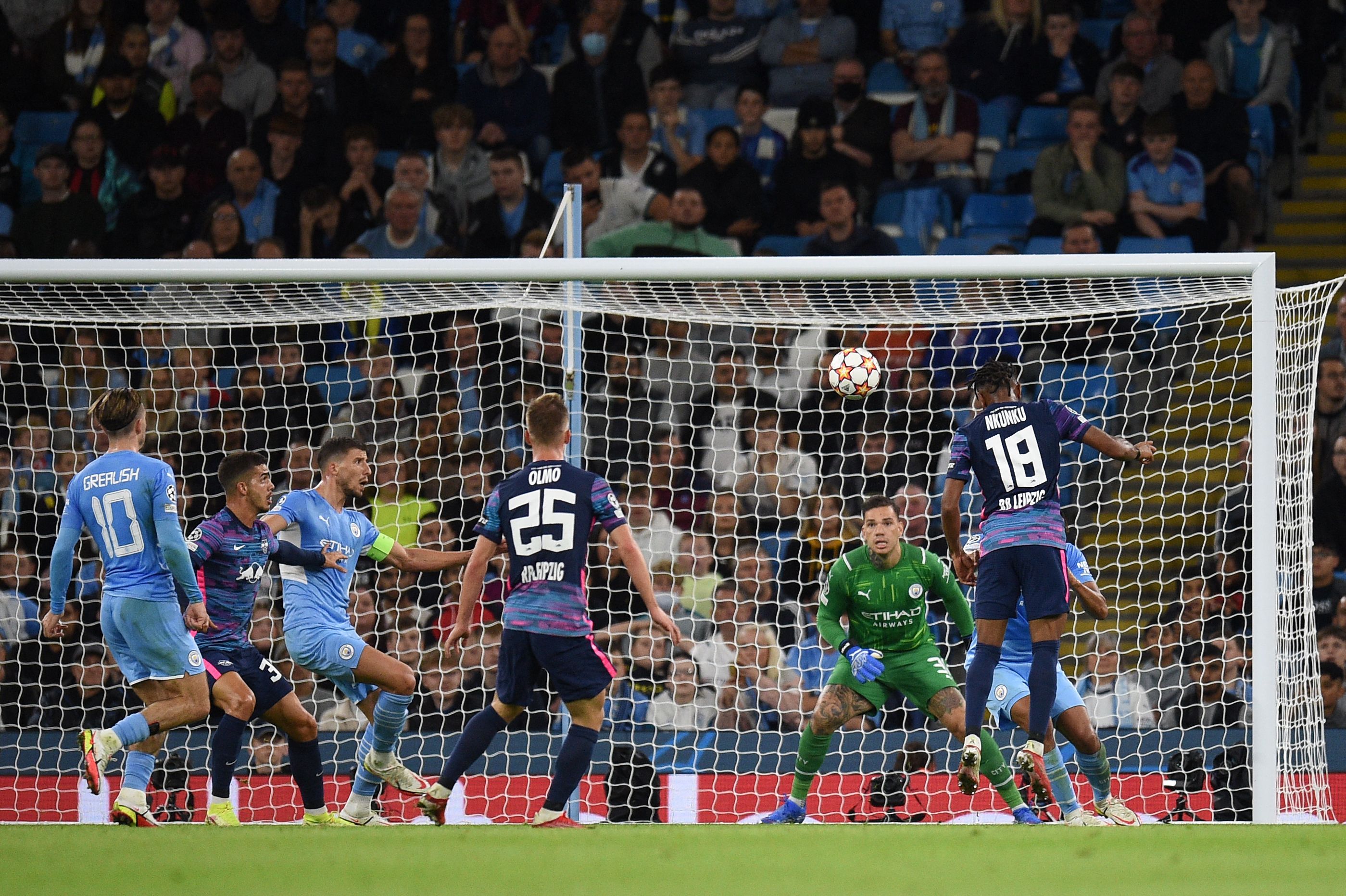 But they have endured a tough start to the season under new boss Jesse Marsch – winning just one of their first four German league matches.

The American had admitted his new look team were not ready for a test like this and at times it showed.

It is just over three-and-a-half months since City’s agonising final defeat to Chelsea in Porto.

“Here we go again, come on City,” said the stadium announcer – and many people knew exactly what he meant.

For an 11th straight season they kicked off a group stage campaign wondering if this could finally be their season.

It got off to a great start too with City taking the lead after just 16 minutes.

A Grealish corner from the left – thumping header from Ake too hot for Peter Gulacsi to handle.

It was a first Champions League goal for the former Bournemouth defender and a special moment for Ake. 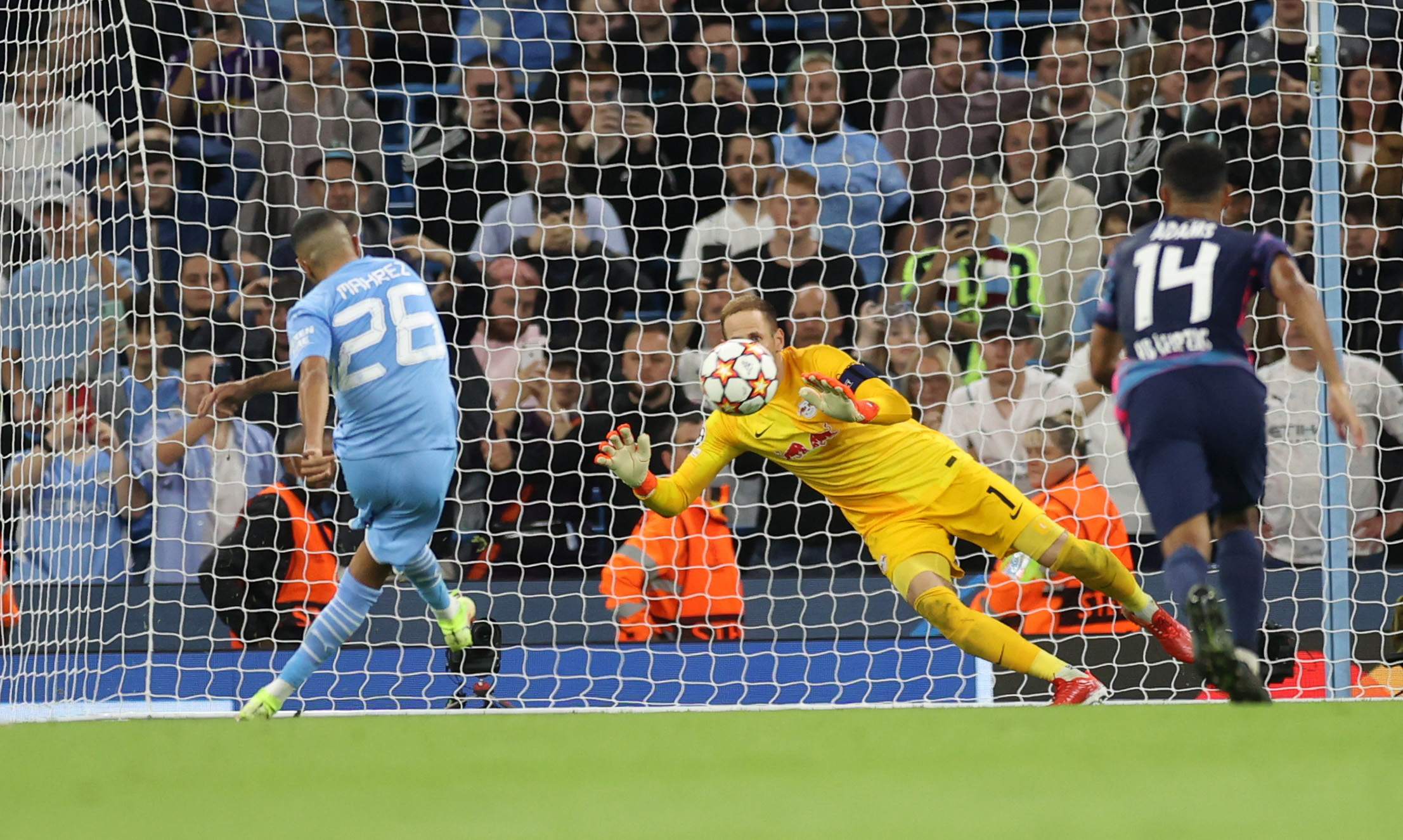 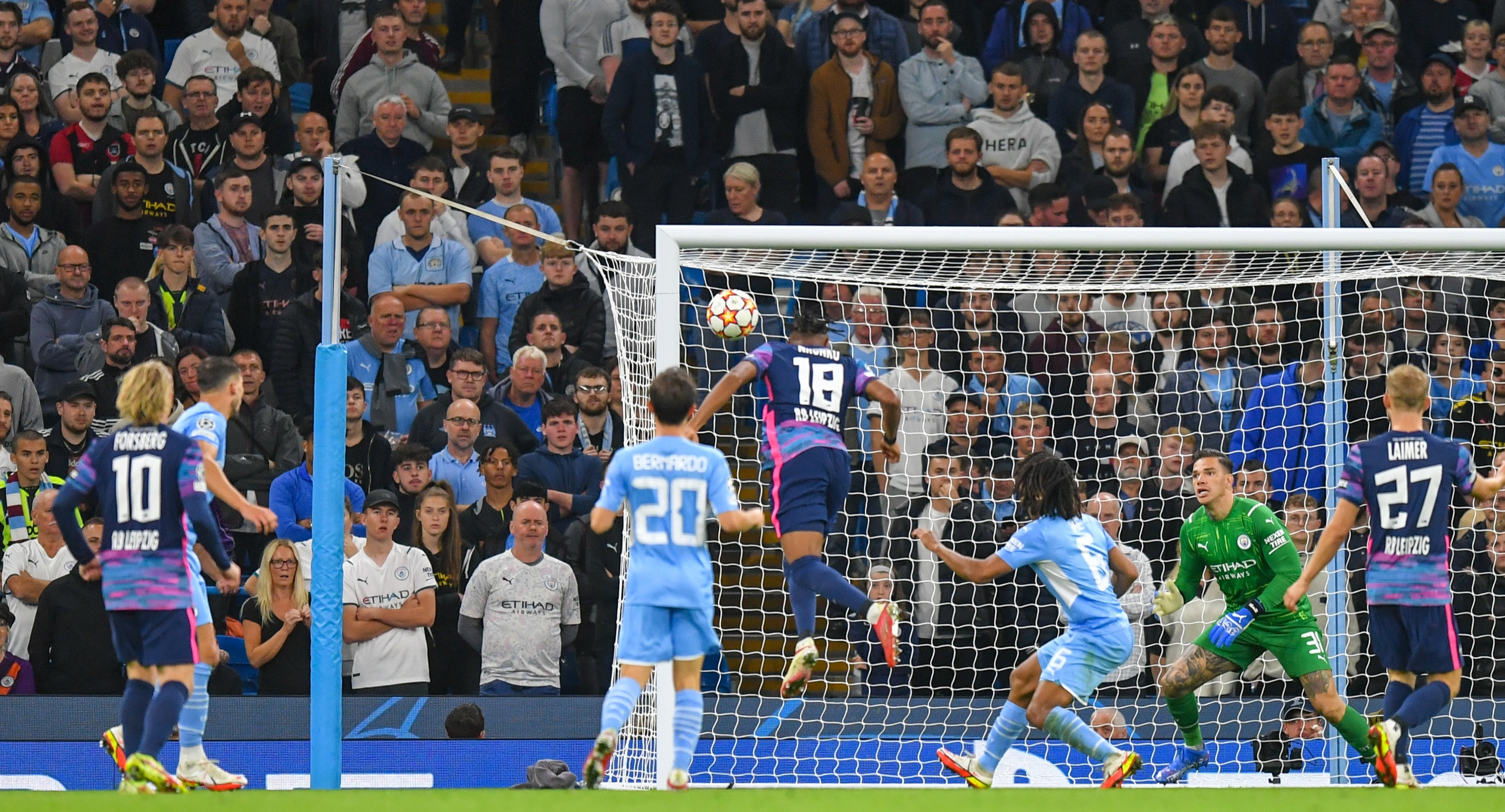 The Dutch international has struggled to get matches since signing for City for £40 million last summer – but got his chance here with John Stones and Aymeric Laporte both out.

City almost doubled their lead when Riyad Mahrez cut in and fired a shot which deflected off the back of Willi Orban and drifted just wide of the far post.

Then Ake was just inches away from getting on the end of a whipped free-kick by Kevin De Bruyne who was starting his first game of the season and just beginning to find his range.

It was the Belgian’s trademark ball into the box from the right hand side that saw Nordi Mukiele lose his bearings.

The French international tried to cushion a header back to Gulacsi but only succeeded in wrong footing his keeper and sending it into his own net.

There was a warning for the home side as Ake sliced one over his own bar after former City full-back Angelino had found some space down the left.

And the visitors were back in the game soon afterwards as Mukiele nodded a cross from Emil Forsberg  back across goal and Christopher Nkunku headed home.

The German side had some hope but it didn’t last for long. 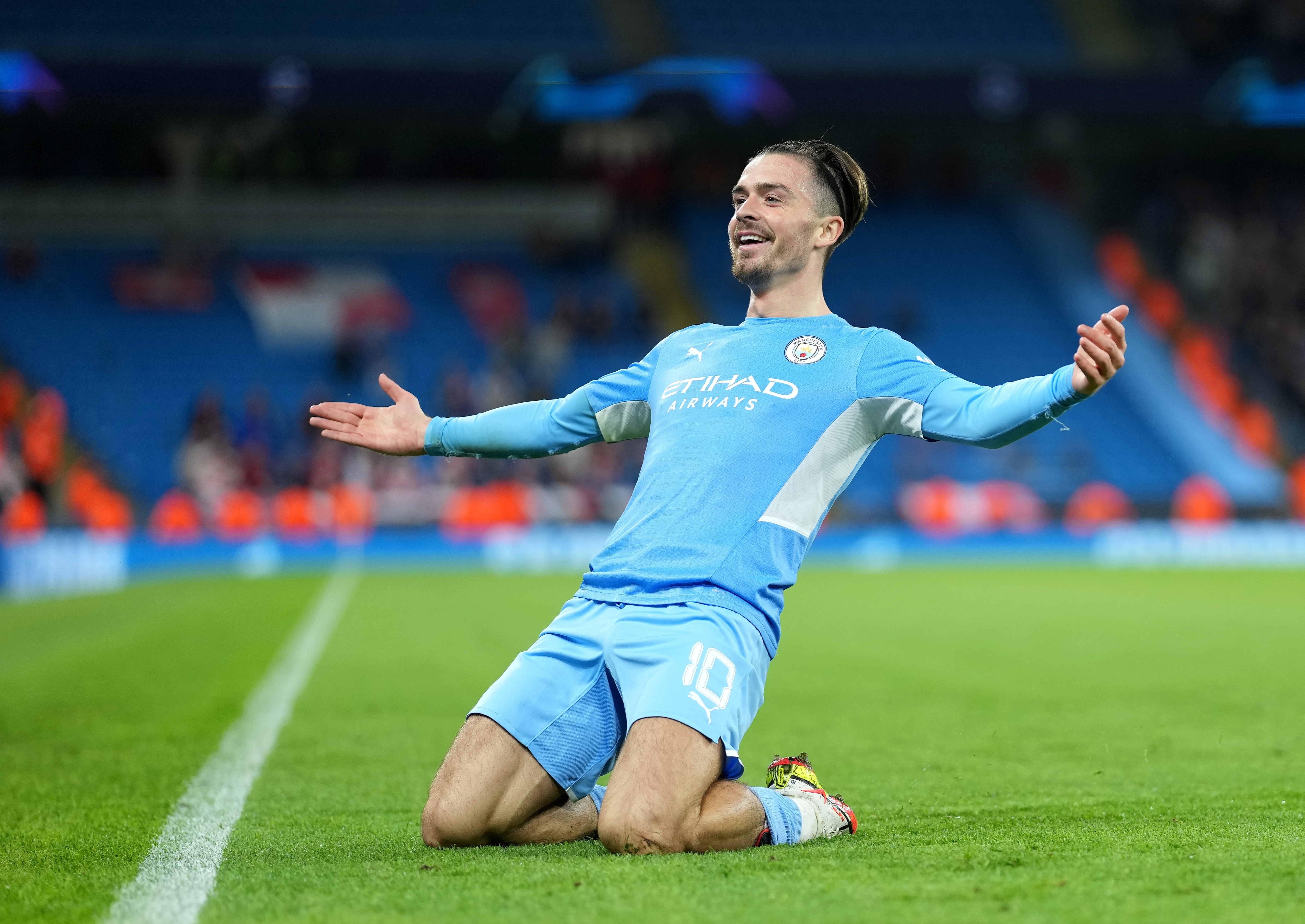 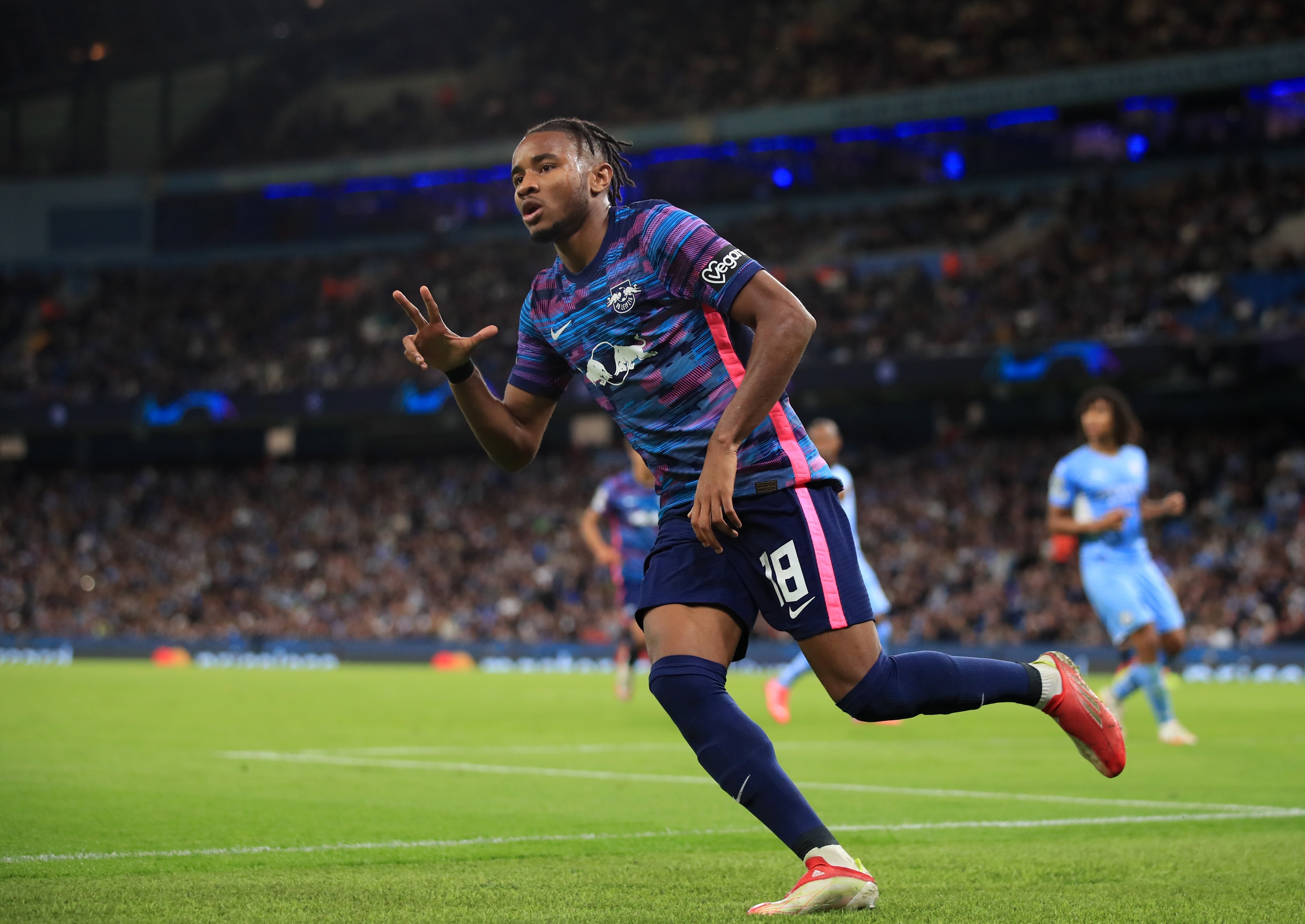 Ferran Torres header struck the arm of defender Lukas Klostermann and appeals for a penalty were waved away – but it was immediately checked by VAR.

The Dutch ref was told to go and look at his monitor and reversed his decision, which looked slightly harsh.

Mahrez didn’t care though as he scored emphatically from the spot – to make it five goals in his last four games in this competition.

That should have been game over – but Leipzig were not for lying down.

With De Bruyne tripping over the referee, Dani Olmo made progress down the left and hung up a cross for Nkunku to score his second header of the game.

Yet just like after their first goal, they conceded again soon afterwards to undo all their good work.

A long hoof out of defence from Ruben Dias may not have been aimed for Grealish but found him out on the left wing.

He cut in and weaved around Tyler Adams before curling a glorious shot past Gulacsi. 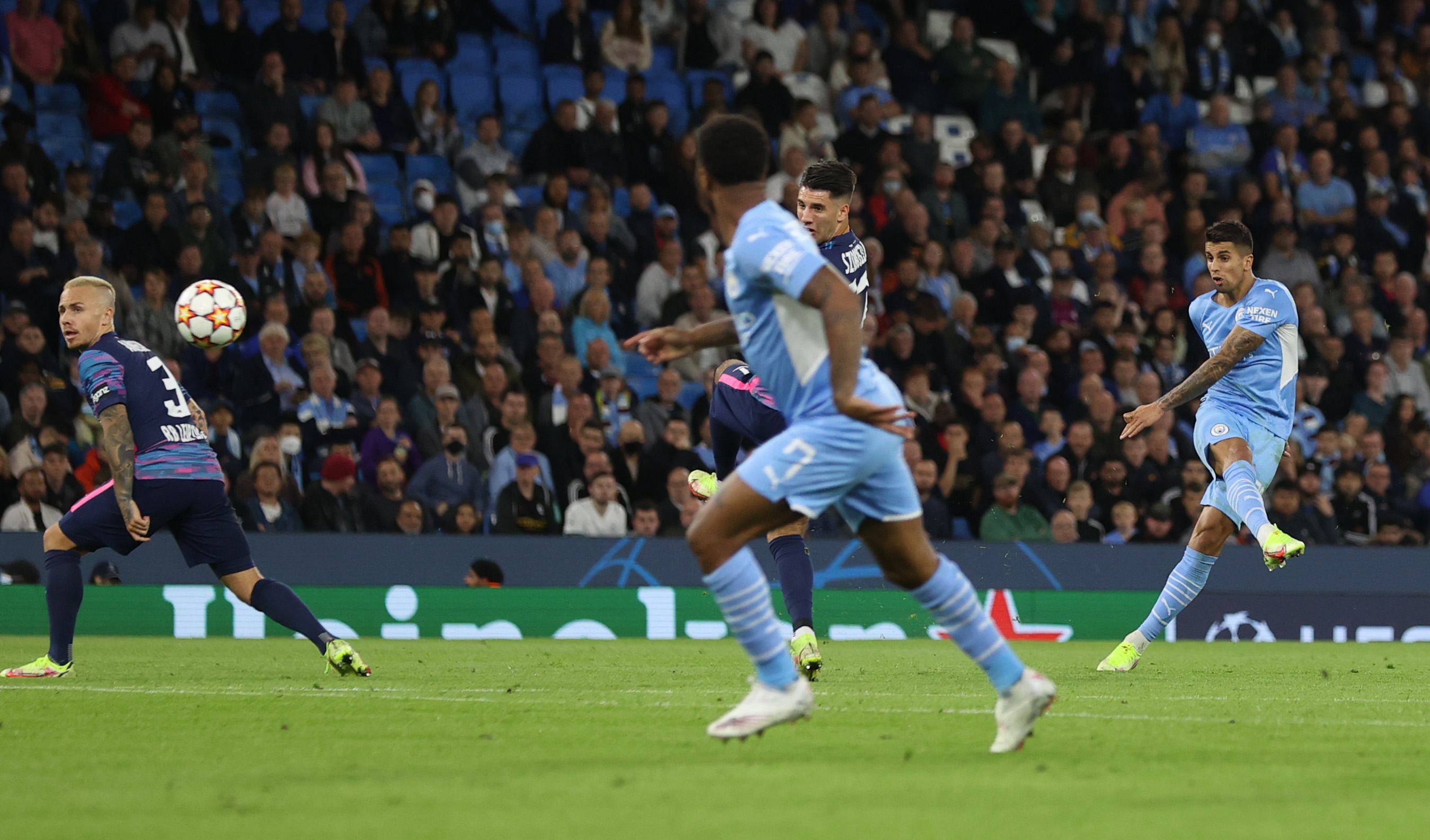 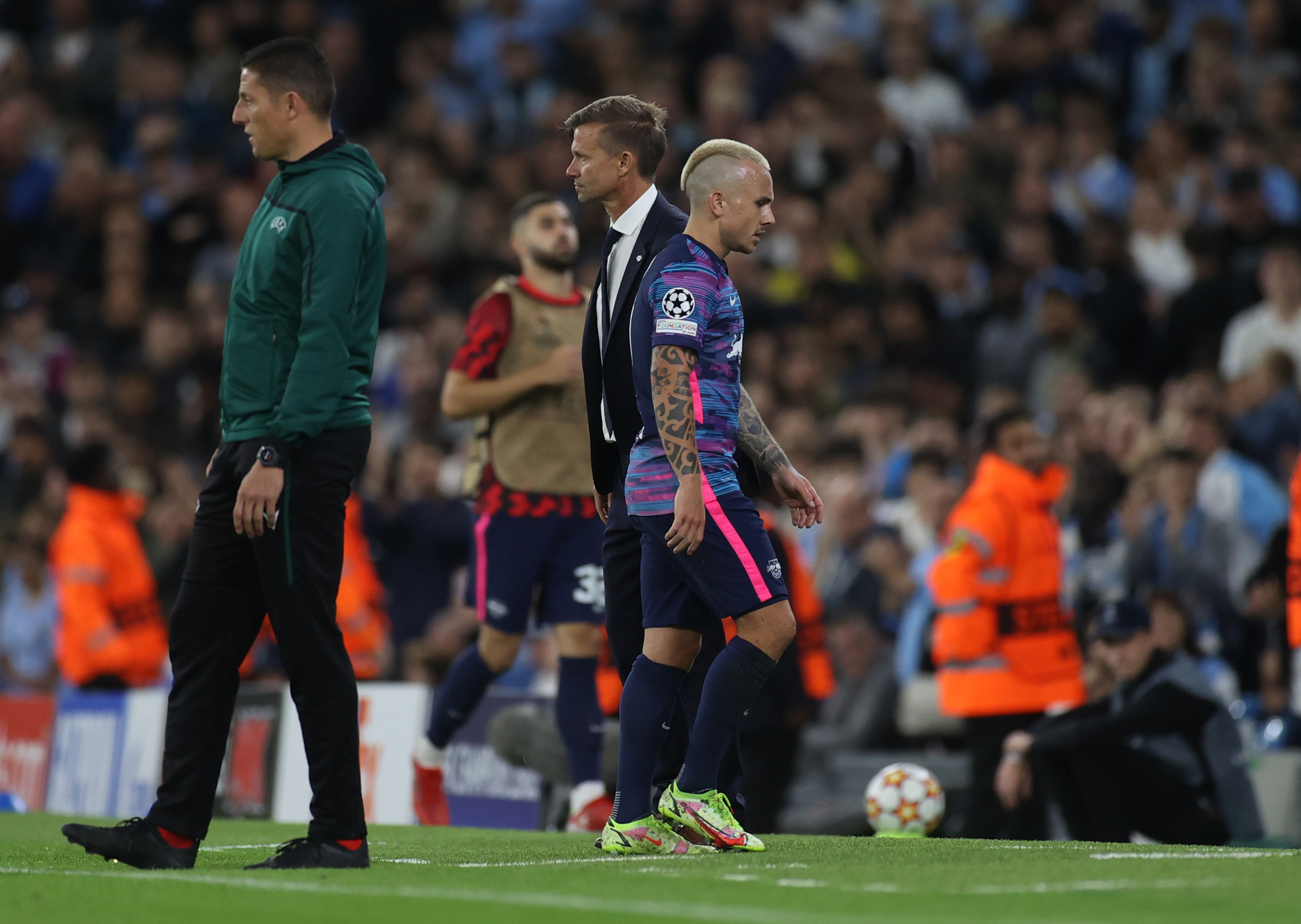 Still Leipzig were not done though – as Nkunku raced clear to finish emphatically past Ederson and complete his hat-trick.

It soon became clear however that he would become only the fourth player in the history of the competition to score a treble and still end the night on the losing side.

Almost immediately their hopes were snuffed out as Grealish and Ilkay Gundogan worked the ball out for Joao Cancelo to rifle in from long range.

Angelino’s return ended on a disappointing note as he received a second yellow card for a foul on Cancelo.

And there was still time for sub Gabriel Jesus to fire in at the back post after the ball bobbled around in the box – marking his 200th City appearance with a goal. 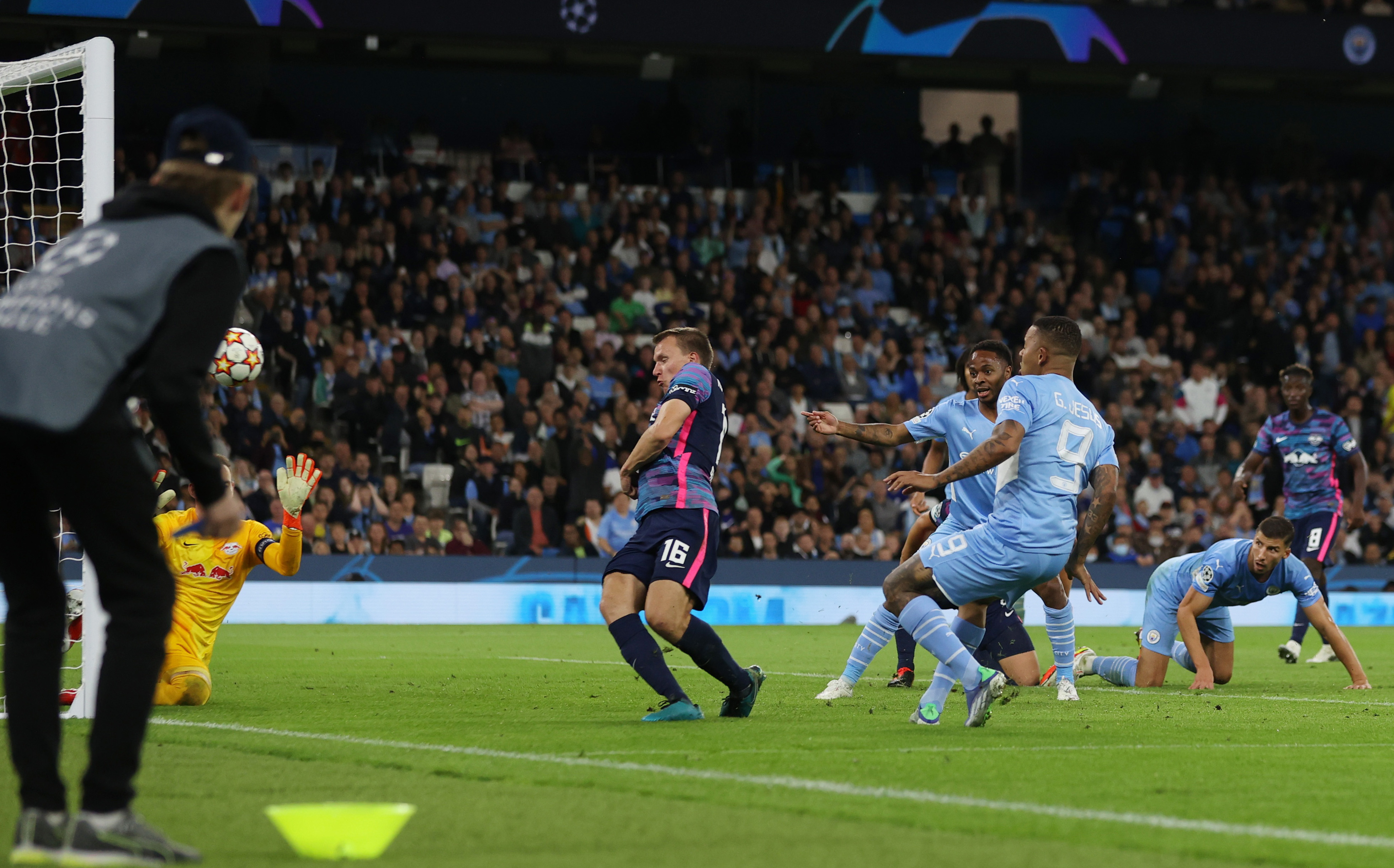