EDINSON CAVANI was the stand-out performer as he brought a European final firmly into focus for Manchester United.

Boss Ole Gunnar Solskjaer revealed this week his players have been struggling to pick each other out at Old Trafford recently. 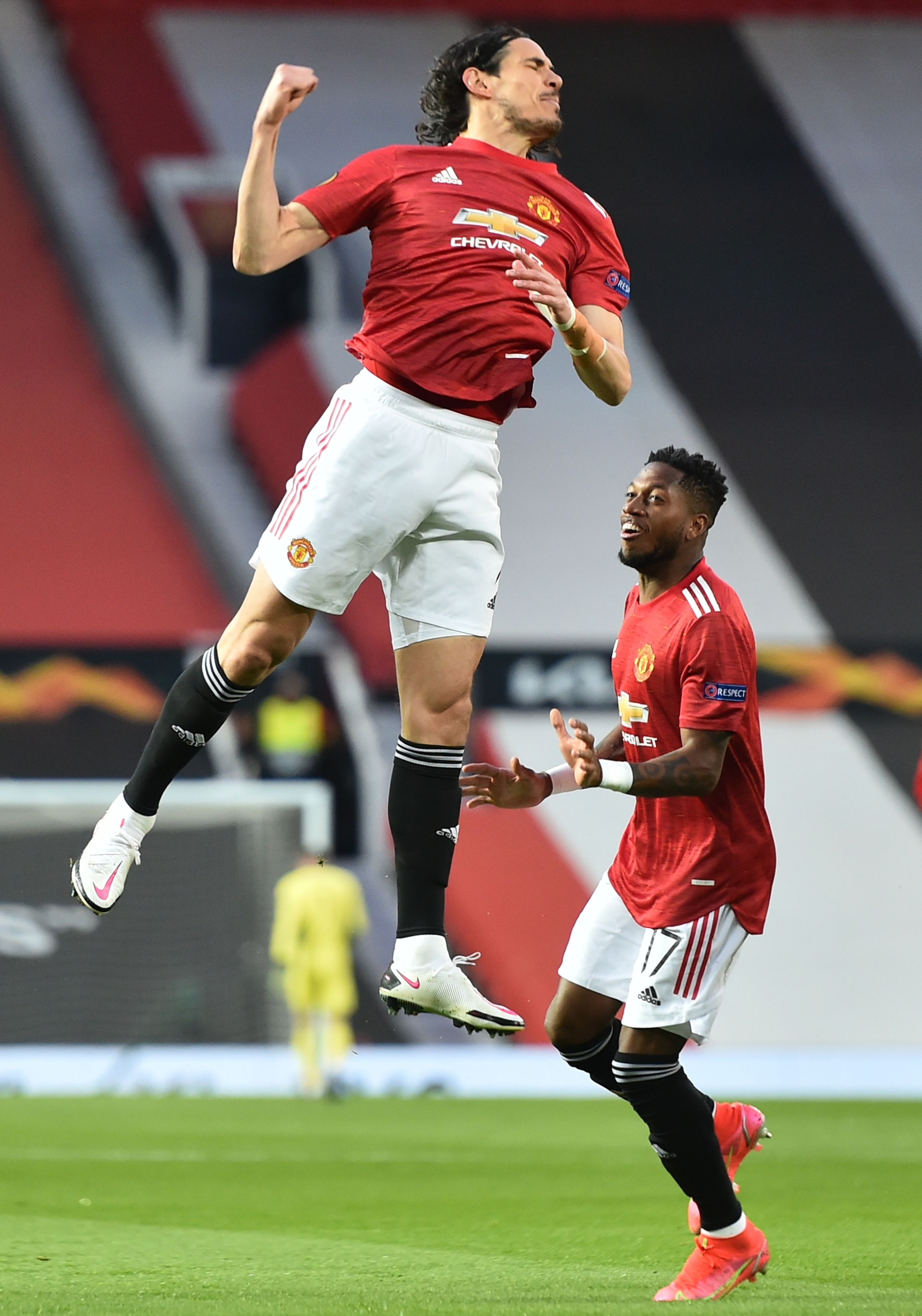 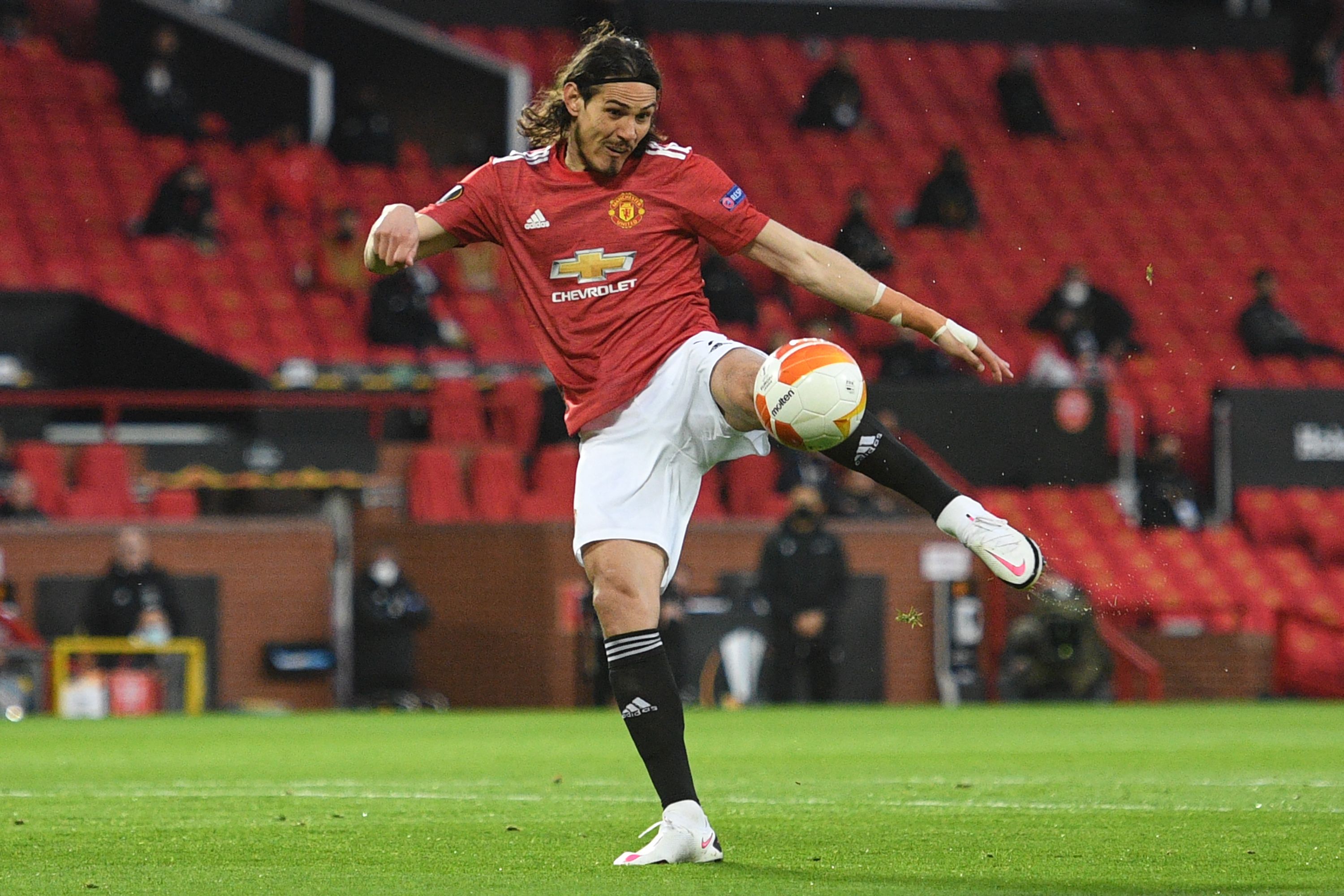 The red banners over the seats at their home have been replaced by black ones – part of the club’s stand against racism.

And after a second home win against the new backdrop,  United’s sights are now firmly set on May 26 in Gdansk.

Cavani struck his 50th goal in European competition to effectively end this tie as a contest in just the sixth minute.

And now only Roma stand in United’s way of a first final under Solskjaer – who will hope it can be fifth time lucky in the semis.

With a 2-0 lead from the first leg in Andalucia, it always looked a long way back for the European rookies from Spain.

Their fate was sealed early on as stand in full-back Alex Telles hung up a cross from the left which was nodded up in the air by Paul Pogba.

It dropped nicely for Cavani who swung his left peg lazily to send a volley past Rui Silva.

The Uruguayan – who also found the net at Tottenham on Sunday – is making a real case for an extra year with United.

With the transfer market expected to be difficult due to the Coronavirus pandemic, Solskjaer is likely to urge him to stay for another 12 months. 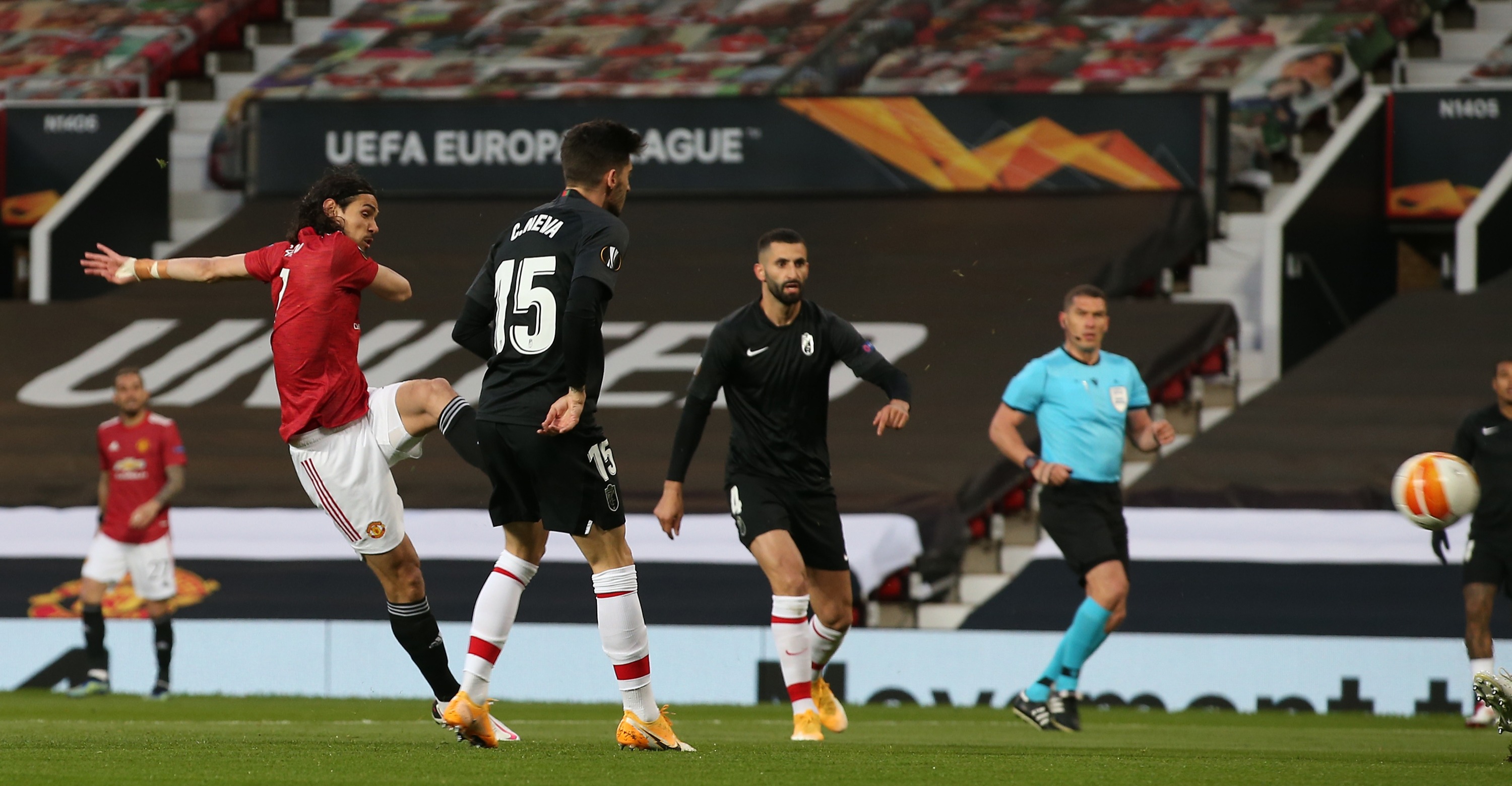 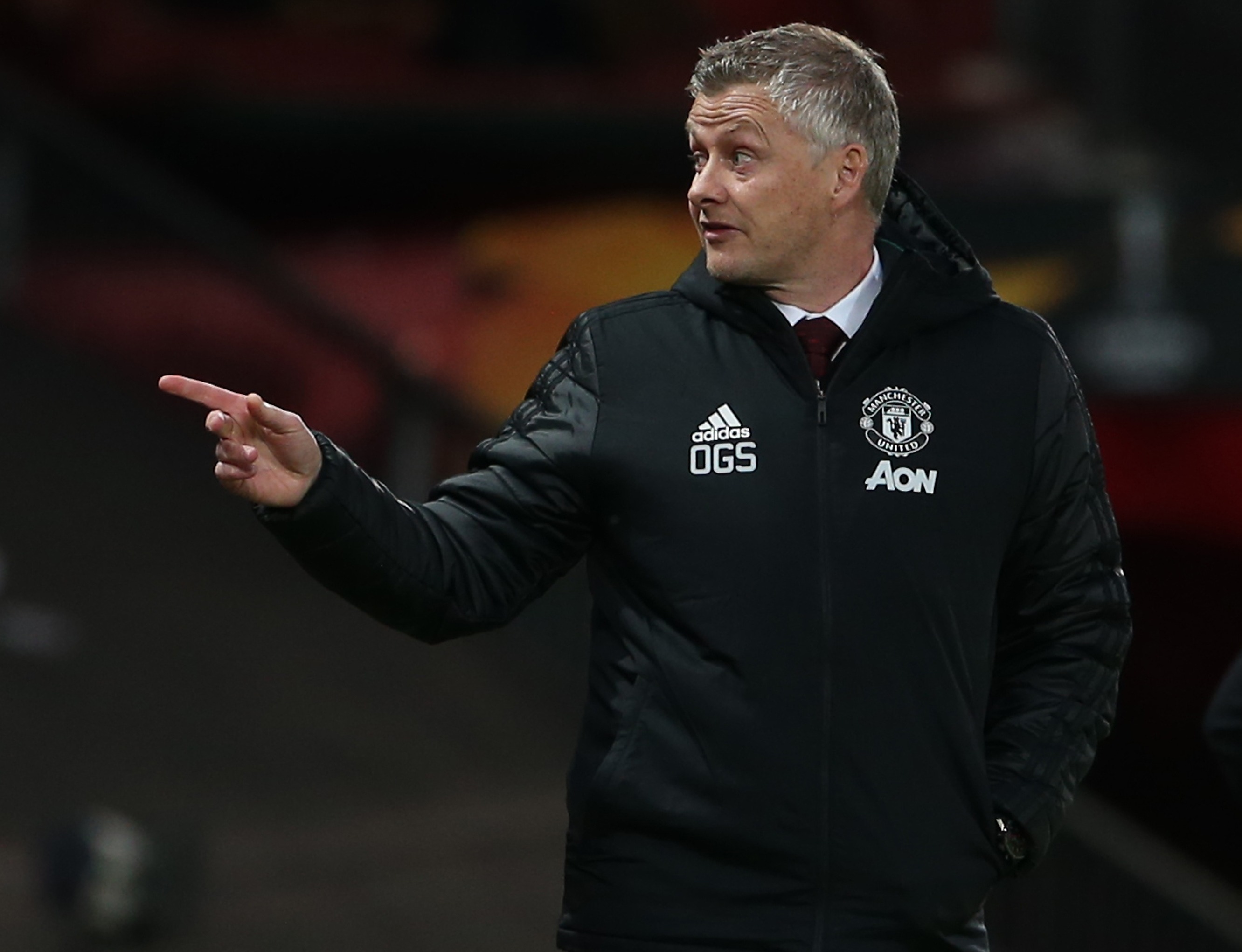 He has now scored in 11 straight seasons in UEFA competition  – a run dating back to December 2012.

Pogba was booked for swinging an arm into the face of Granada captain German Sanchez and he was holding his breath minutes later.

He lunged in to tackle on loan Manchester City midfielder Yangel Herrera but fortunately there was no card from the Romanian ref –   just a final warning.

From the resulting free-kick Herrera ghosted in around the back but planted his header wide.

The Venezuelan is hoping to be back in Manchester next season playing for Pep Guardiola’s team and did himself no harm with his first half show here.

The new background – part of the club’s ‘See Red’ campgian – was obviously doing the job as they also won against Brighton on the opening night.

United looked to add to their lead before the break but Bruno Fernandes had left his shooting boots at home. 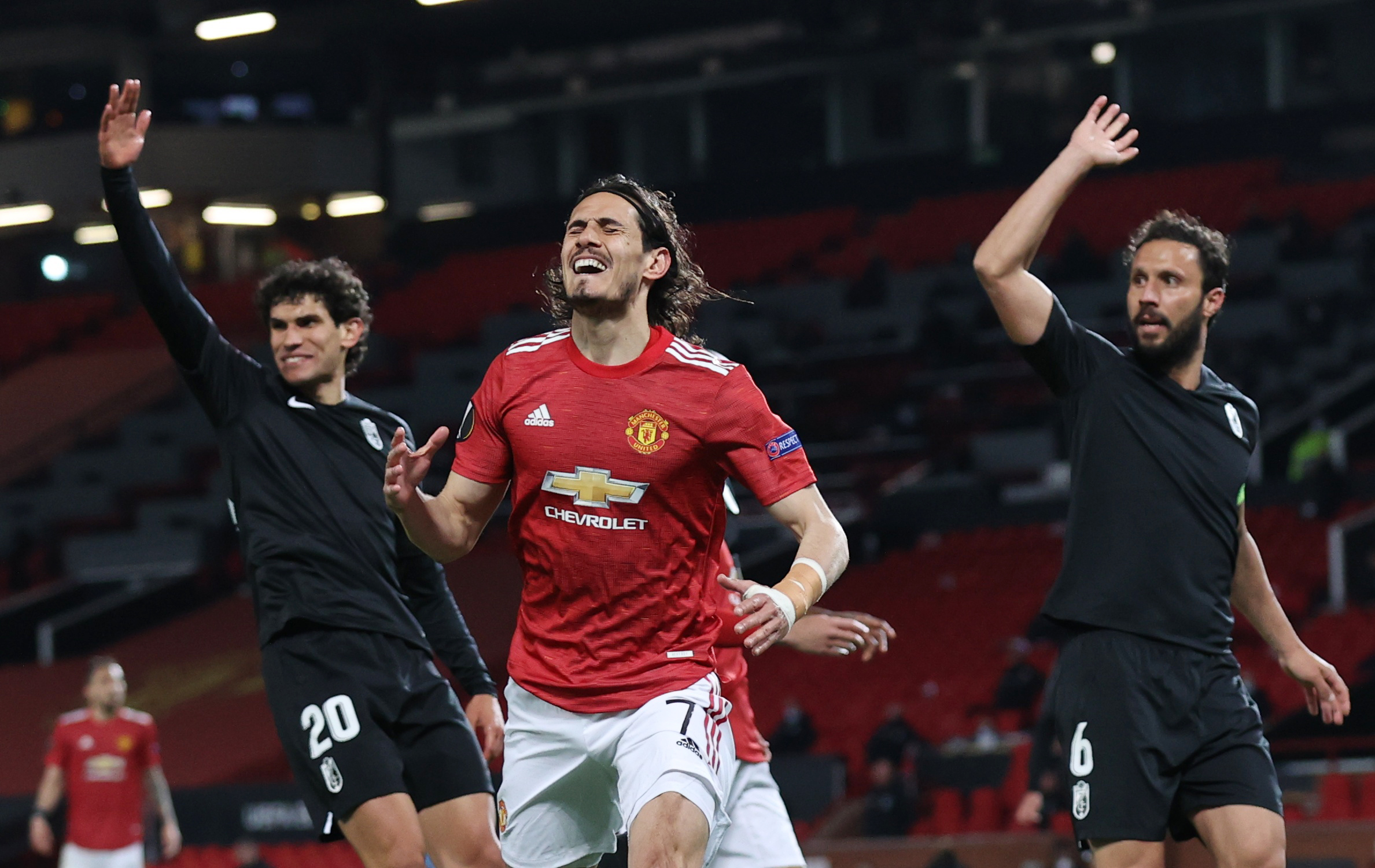 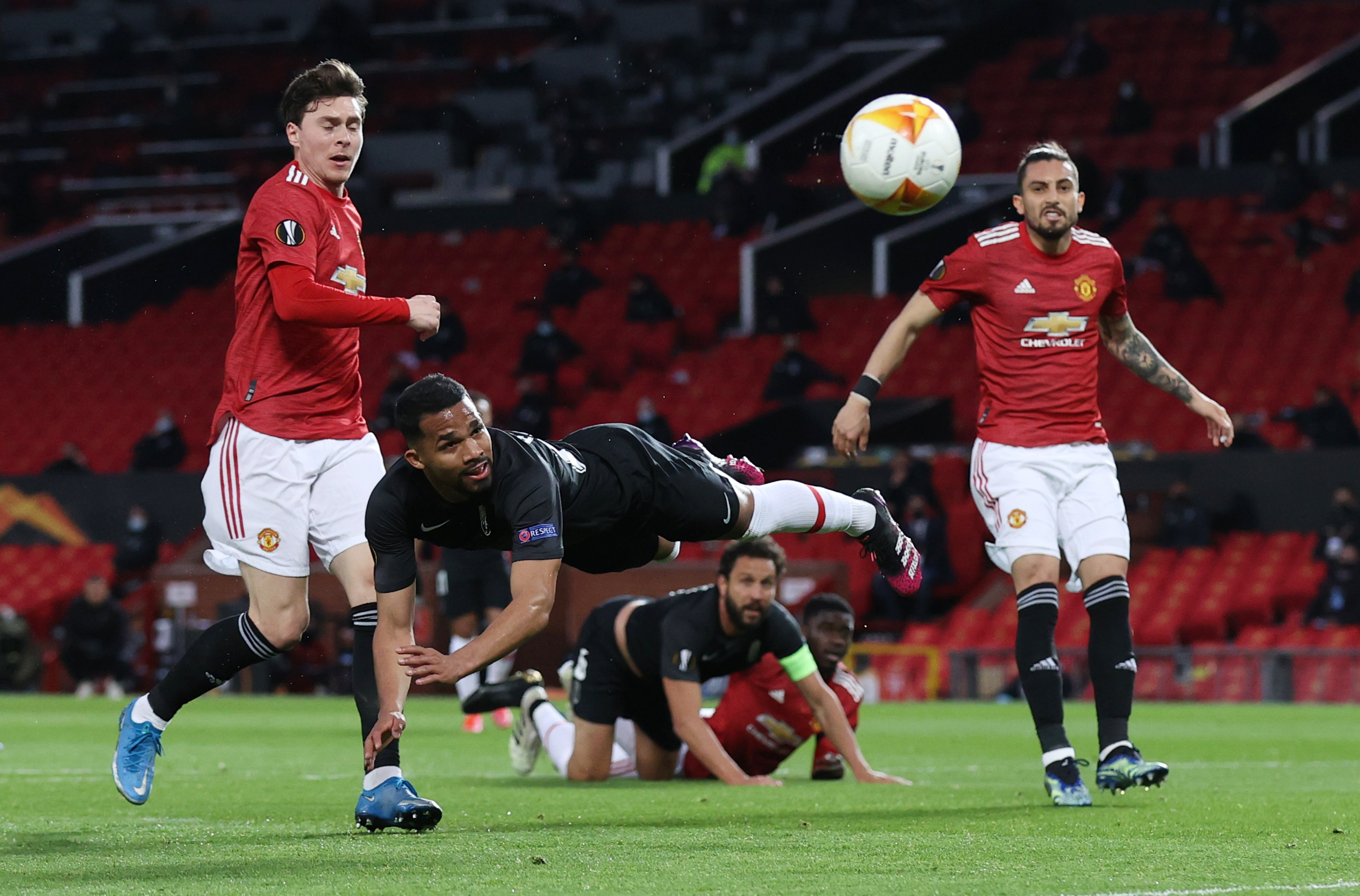 The Portuguese sent a fierce volley just over the angle and was unlucky but then pulled his shot wide from 20 yards after a clever lay off from Cavani.

With Pogba in danger of getting himself sent off, Solskjaer decided to intervene at the interval.

He took the captain off to avoid a suspension for the semi-final in two weeks time and replaced him with Donny van de Beek.

The Dutch midfielder – who has had such an indifferent first season at Old Trafford – stood up a cross that unmarked Mason Greenwood headed straight at the keeper.

Cavani got on the end of a Bruno Fernandes cross but his glancing header dropped just wide.

And a surging run from Greenwood ended with van de Beek shooting just off target when a goal would have done him the power of good.

This tie was the biggest moment in Granada’s history and nobody would have begrudged them if they had marked it with a goal.

In fact they did everything but score with Herrera bringing a smart save out of David de Gea who was determined to preserve his clean sheet.

Victor Diaz also tried his luck from distance but this one was straight at the Spanish keeper.

As the game ticked into stoppage time the second goal arrived and it was another cross from the left by Telles that did the damage.

It looked destined for sub Juan Mata but hit the body of defender Jesus Vallejo and rolled into the net.

It was an unfortunate way for Granada’s big night to end and they will hope their day comes again soon.

But United are looking forward to their 18th European semi-final later this month. Only great rivals Liverpool in this country have more.