Martinez makes rude gesture after being presented with Golden Glove

Argentina goalkeeper Emiliano Martinez shocked fans watching the World Cup final as he made a lewd gesture after receiving the Golden Glove award following his star showing in their victory.

Argentina triumphed over France, winning on penalties after a dramatic 3-3 draw.

Martinez made a huge save in the final moments of extra-time to take the game to spot-kicks and then proceeded to make the difference in the shootout. 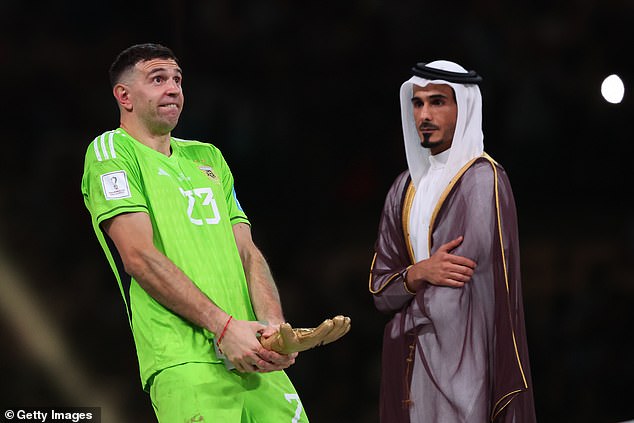 After the game he was presented with the Golden Glove, a trophy handed out to the goalkeeper with the most clean sheets.

And he proceeded to hold it in front of his groin and make a rude gesture as he made his way back to join his team-mates.

‘Emi Martinez is a very positive guy and told his team-mates he was going to save some penalties,’ revealed Argentina boss Lionel Scaloni.

BBC Sport’s pundits at the game were all in agreement too that Martinez’s antics played a huge part in the victory.

‘There is no doubt he had a massive impact mentally in the shootout,’ said former England midfielder Jermaine Jenas 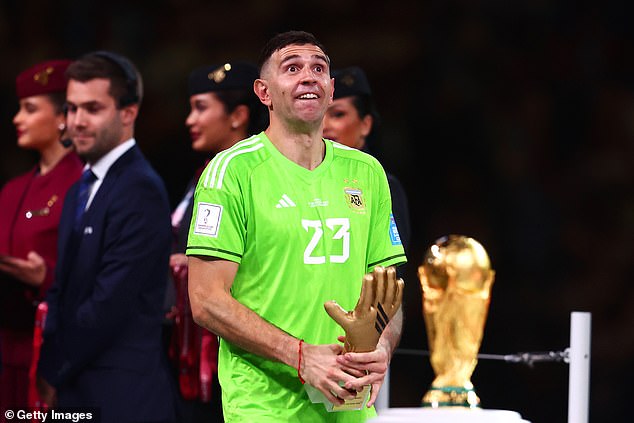 Martinez made two huge saves, one in extra-time and one in the penalty shootout