EARLY on a chilly Sunday morning, Shelagh Milligan wiped the dirt from her face and realised that, not for the first time, she’d be sporting a black eye at work the next morning.

It was worth it, though, as her tackle helped secure another win for the local rugby club’s women’s team she played scrum-half for. 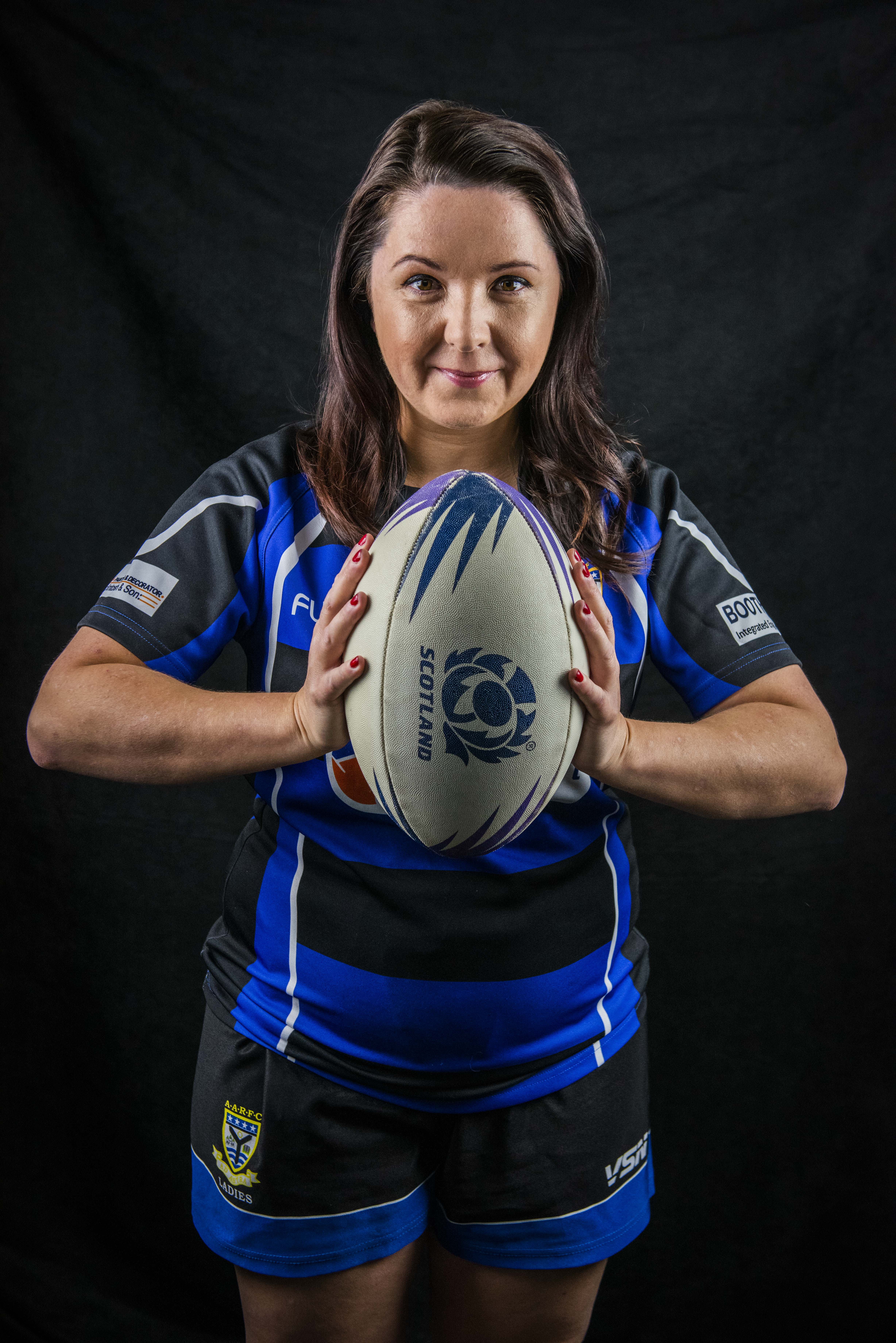 But life hasn’t always been gumshields, mud and rugby kit for Shelagh.

“Until 2016 I did no exercise whatsoever,” confesses the 39-year-old company director from Ardrossan, Ayrshire.

“I told myself I didn’t have time. During the week I was busy running my communications company, and weekends were for relaxing and spending time with my husband and 19-year-old twin stepsons.

"Exercise was a chore, not something to be enjoyed, and I wasn’t prepared to make space for it in my life.” 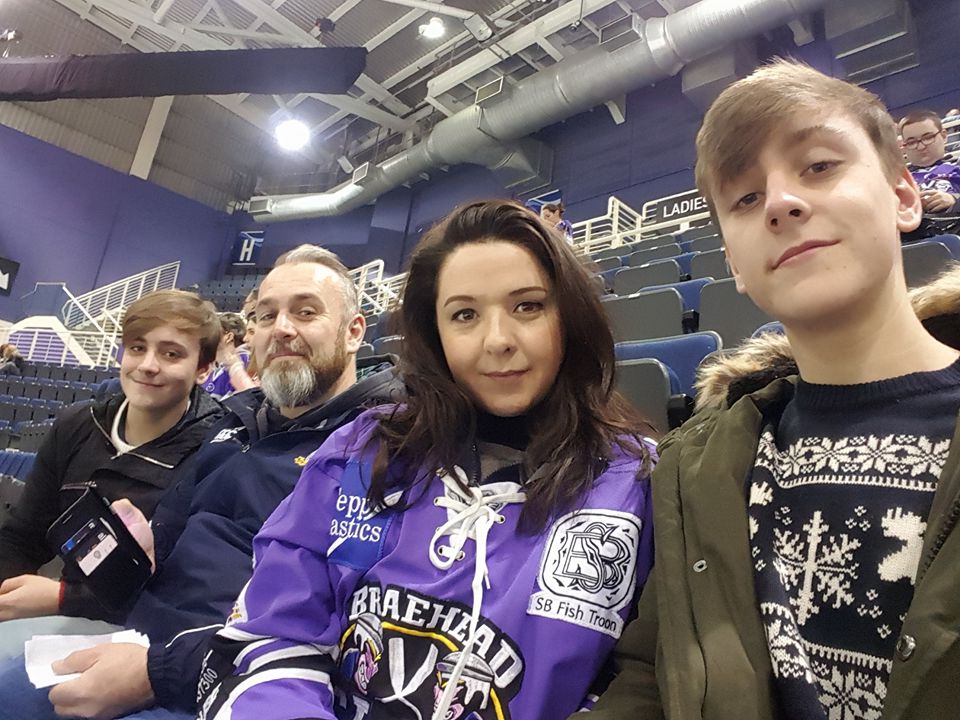 Now Shelagh trains twice a week after work, lifts weights at the gym and plays a match every Sunday against other teams across Scotland.

“I live and breathe women’s rugby and can’t imagine life without it,” she says.

Shelagh, who lives with her husband Brian, 43, an engineer, is one of the 4million women inspired to take up sport in the last four years, following the launch of the groundbreaking This Girl Can campaign set up by Sport England in 2015.

Despite the hype surrounding the London 2012 Olympics and countless public campaigns promoting the importance of exercise to women, Sport England’s research revealed 1.8 million more men than women were regularly active.

This Girl Can’s aim was to close that gender gap. Achieving it would take a lot of work, though.

“One was a fear of judgement – 75% of women wanted to do more exercise but were too worried about what others would think of their ability and looks.”

Bad experiences at school – such as being picked last for teams or bullied for not playing well – also had a lasting effect on attitudes to sport.

“Even though it may have happened years ago, it really turned the women off any form of exercise,” says Kate.

“On top of that there was a guilt among women about taking time for themselves away from family and work to exercise. We made it our responsibility to break down these mental barriers.”

Thanks to powerful TV, cinema and social media advertising showing women of all shapes, sizes, ages and ethnicities exercising, by its second year the campaign had motivated 2.8 million women aged 14-40 to become more active.

However, while it’s clear This Girl Can had a huge impact on the number of women being inspired to get active, there were other factors at work.

A rise in successive high-profile all-women sporting events, including World Cups in football, rugby and cricket – won by England in 2017 – as well as gold-medal success for the England netball team at last year’s Commonwealth Games clearly helped.

According to Jessica Pinchbeck, a senior lecturer in sport and fitness at The Open University, this eruption of female talent at the highest level is also down to more money being ploughed in to sport.

“It’s a cycle,” she explains. “The more successful elite athletes are, the more funding sports governing bodies are given to encourage women to take them up and keep playing.

“In the past young girls didn’t see sport as a career. Now they have role models on TV and social media, which is really inspiring.”

And it’s having a knock-on effect at grass-roots level, too. England Netball says it’s seen sign-ups to its Back To Netball programme rise by 80% since  the national side’s Commonwealth win last year.

Recent figures from the Scottish Rugby Union revealed the number of young women playing rugby have swelled by 95% since 2009/10, with adult women players up by 72.5% according to research  in 2017.

Meanwhile England Rugby has seen more than 10,000 sign up to its Inner Warrior Programme  to encourage more women into contact rugby in two years. That’s expected to rise to 50,000 by 2021.

Just last month the SB Frankfort Under-12 Girls football team from Plymouth completed an unbeaten run and won a league and cup double, having joined  a boys’ league because there wasn’t one for girls.

Shelagh’s decision to get active was spurred on by the fact she was about to turn 40.

“I’d always hovered around a size 12, but by the end of my 30s I noticed my body felt softer and clothes were tighter,” she admits.

“Although I’d always eaten well, deep down I knew I needed to do more activity to stay healthy as my lifestyle was very sedentary.

“I couldn’t help but worry about the implications if I carried on doing zero exercise.

“I’d tried the gym and walking, but found them boring. Then one day I saw an advert for a new women’s team at my local rugby club, Ardrossan Accies.

“I’ve always loved watching rugby on TV, although I’d never picked up a ball in my life. The idea that we’d all be beginners appealed as it felt less intimidating than joining an established team.”

At first Shelagh was nervous about the contact, especially as she’s just 5ft 1in. Now she relishes it.

“It’s so different from my everyday life in the office. There’s something really liberating about getting filthy, losing inhibitions and just focusing on the ball and my team around me,” she explains.

“But while my husband and stepsons really support me, I have encountered some negative reactions. We’ve had men shout at us  to get off the pitch or say it’s not a game for girls.

“Once  I was shopping for new boots with my husband and a male shop assistant assumed they were for him, not me. When we corrected him, he looked embarrassed.

“It’s exasperating as it’s such an outdated assumption, but attitudes are changing. We now have an under-18s girls’ team, which is fantastic.

“Thanks to social media there’s so much pressure on that generation to always look perfect – it’s great to see them getting muddy and talking about being strong as opposed to skinny.”

At school we were only allowed to play netball or rounders, never hardball cricket

Florence Woods, 21, also plays what was once seen as a “male” sport.  The law student from Oxfordshire rediscovered her childhood passion for cricket after England’s 2017 World Cup win, but with no local women’s team she joined the men instead.

“My dad Jonathan, who’s 56, is a keen cricketer, and when I was 12 our local club formed a girls’ team, which I played for throughout my teenage years,” she explains.

“At school we  were only allowed to play netball or rounders, never hardball cricket, whereas the club treated us seriously, just like the boys. Sadly it all fizzled out when a lot of us stopped playing at 17 to focus on A levels and university.”

However, last summer Florence moved back home to work at a solicitor’s firm for a year as part of her law → degree at Bournemouth University and decided to take  up the sport again. 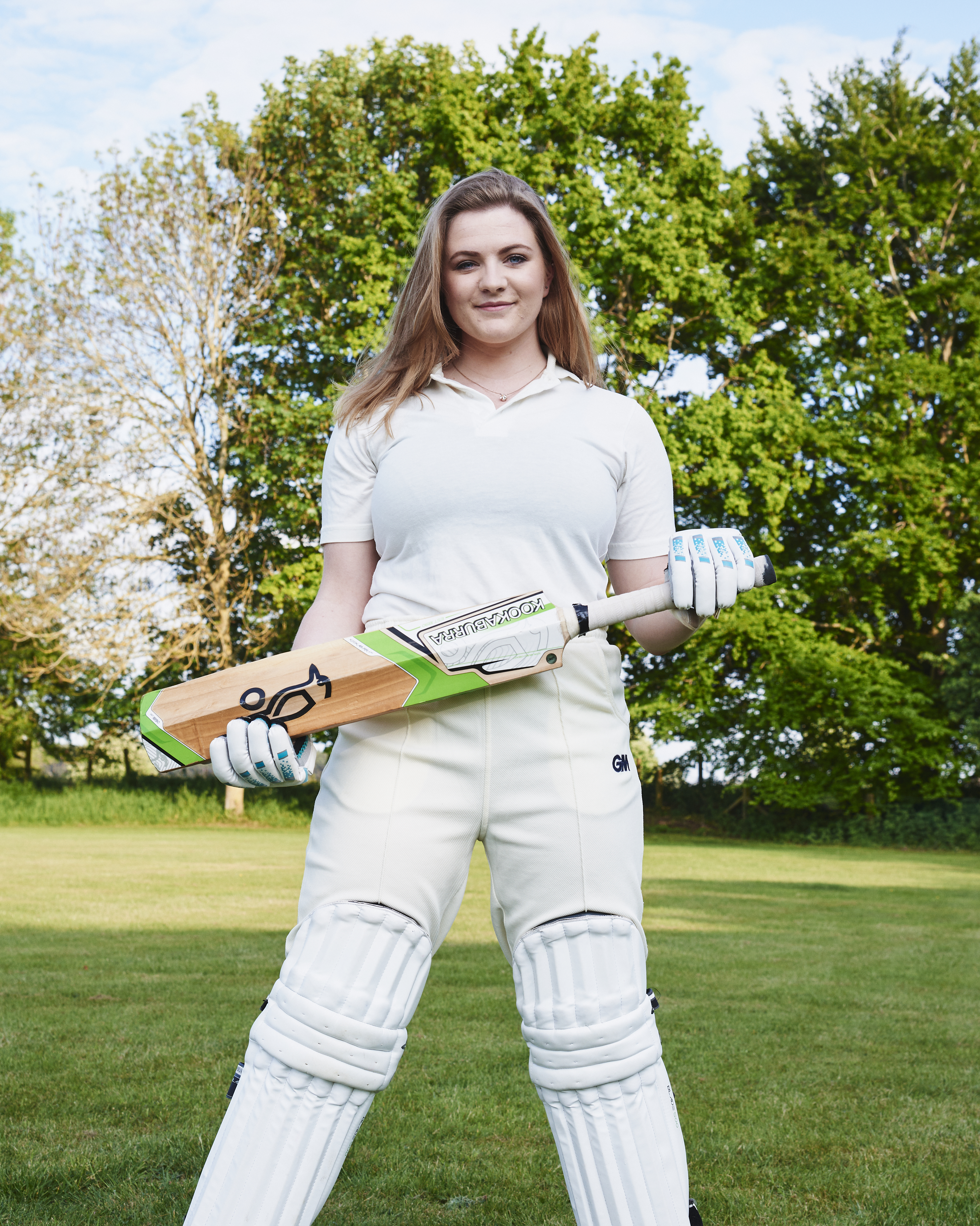 “I’d been to watch England play Australia at the 2017 Women’s Cricket World Cup in Bristol, which was really inspiring,” she says.

“‘As there were no women’s teams at the local club any more, I asked if I could play for the men’s team.

Thankfully they couldn’t have cared less that I’m a woman – all that mattered was that I practised hard and played well.”

Now Florence trains one evening a week and plays a match every Saturday. “I’m the only woman on the field but I’ve found the men very accepting,” she says.

“You have to be fit and skilled – height, weight and sex don’t come into it.

“But there’s still a misconception cricket is a man’s sport, and I think that can put off younger girls.

“I want them to see me and realise it’s a sport for everyone. There’s nothing like the feeling I get walking  off the field knowing I’ve helped us win. That feeling stays with me all week.” 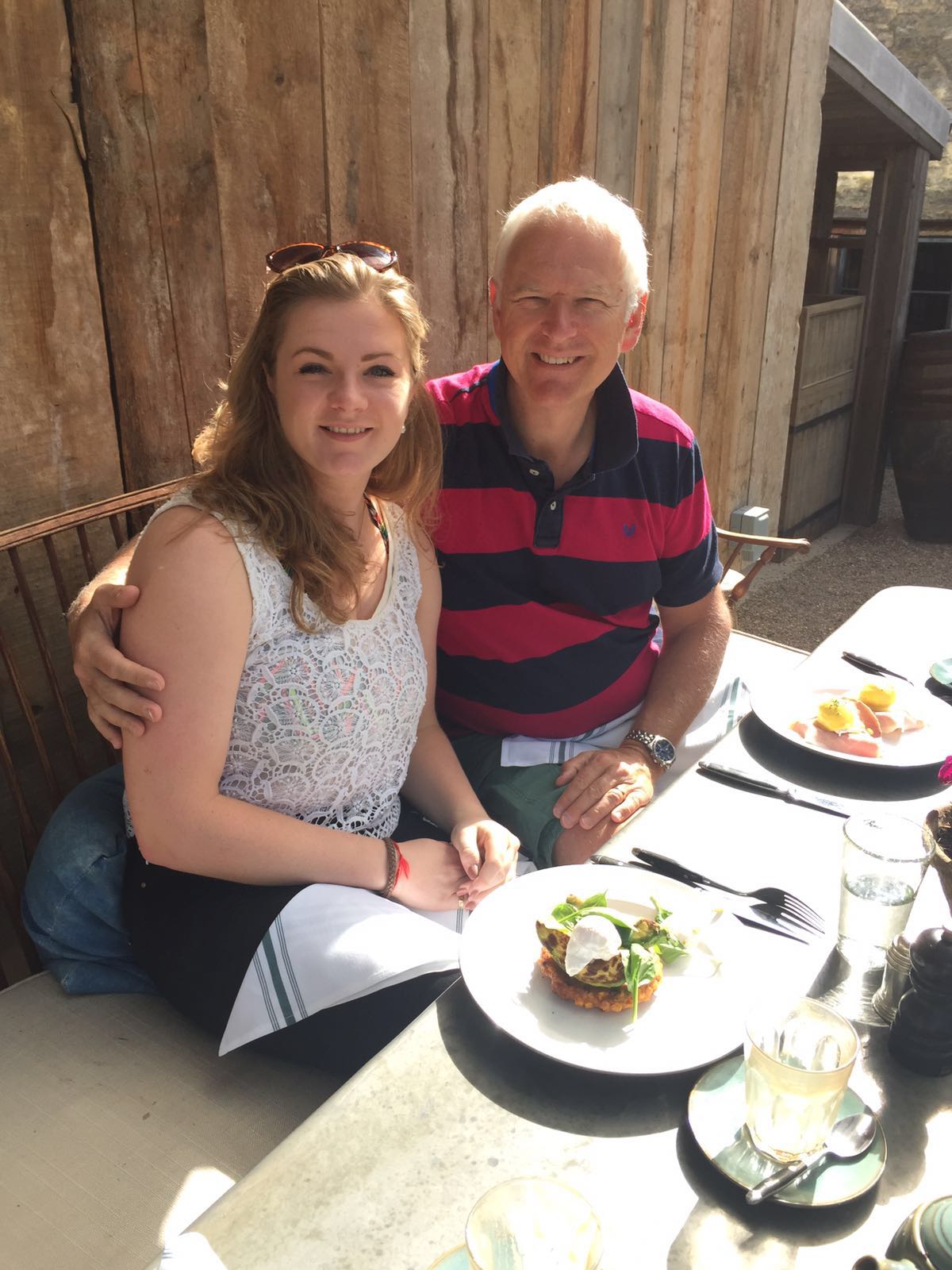 “It’s time away from normal  life and its stresses,” she explains. “It’s also a form of mindfulness, focusing only on the physical activity.

“The feelings of confidence and strength sport provokes also cascade into other parts of life and helps  build mental resilience.

“Group sports, whether that’s playing in a netball team or running with a community, are particularly great because women  are ‘tend and befrienders’ – we are social creatures, so the connections sport can provide are important.”

Following This Girl Can’s initial success, a second phase was launched in February 2017, focusing on getting older women more active, which reduced the gender gap down to 1.55 million people. 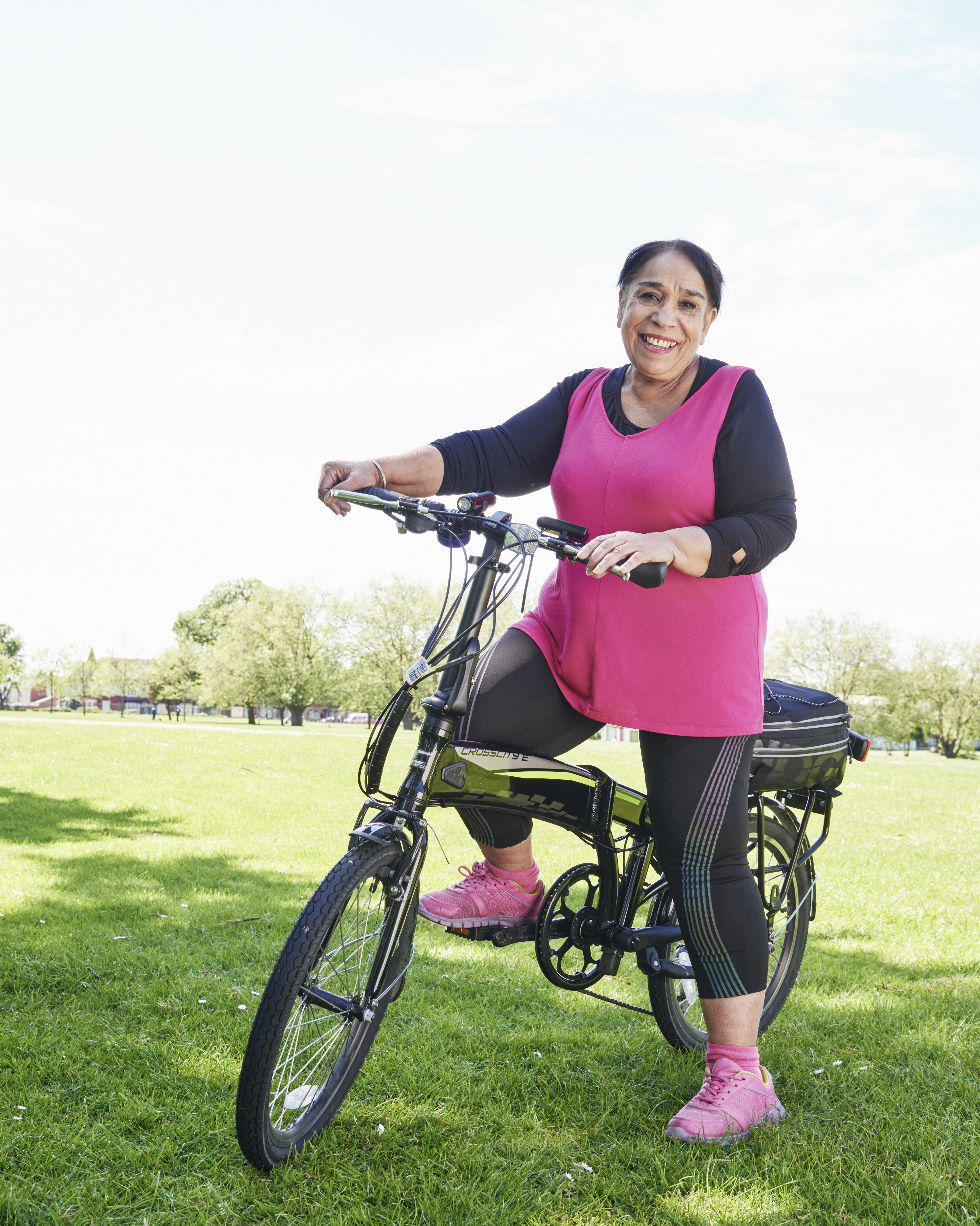 Late last year we saw the start of phase three, Fit Got Real, which promotes the message that you don’t need fancy equipment or a specific location to exercise.

“We’re also focusing on reaching women from lower income groups and the BAME community, who are less likely to be active,” explains Kate. “We’re not going to leave any woman behind.”

Proving that age or race is no barrier when it comes to taking up sport for the first time, grandmother Sam Sahdra, 64, from Birmingham, learned to cycle in 2016. Now she’s a qualified instructor, teaching other women.

“I never learned to ride a bike because my family emigrated to the UK from India when I was four. 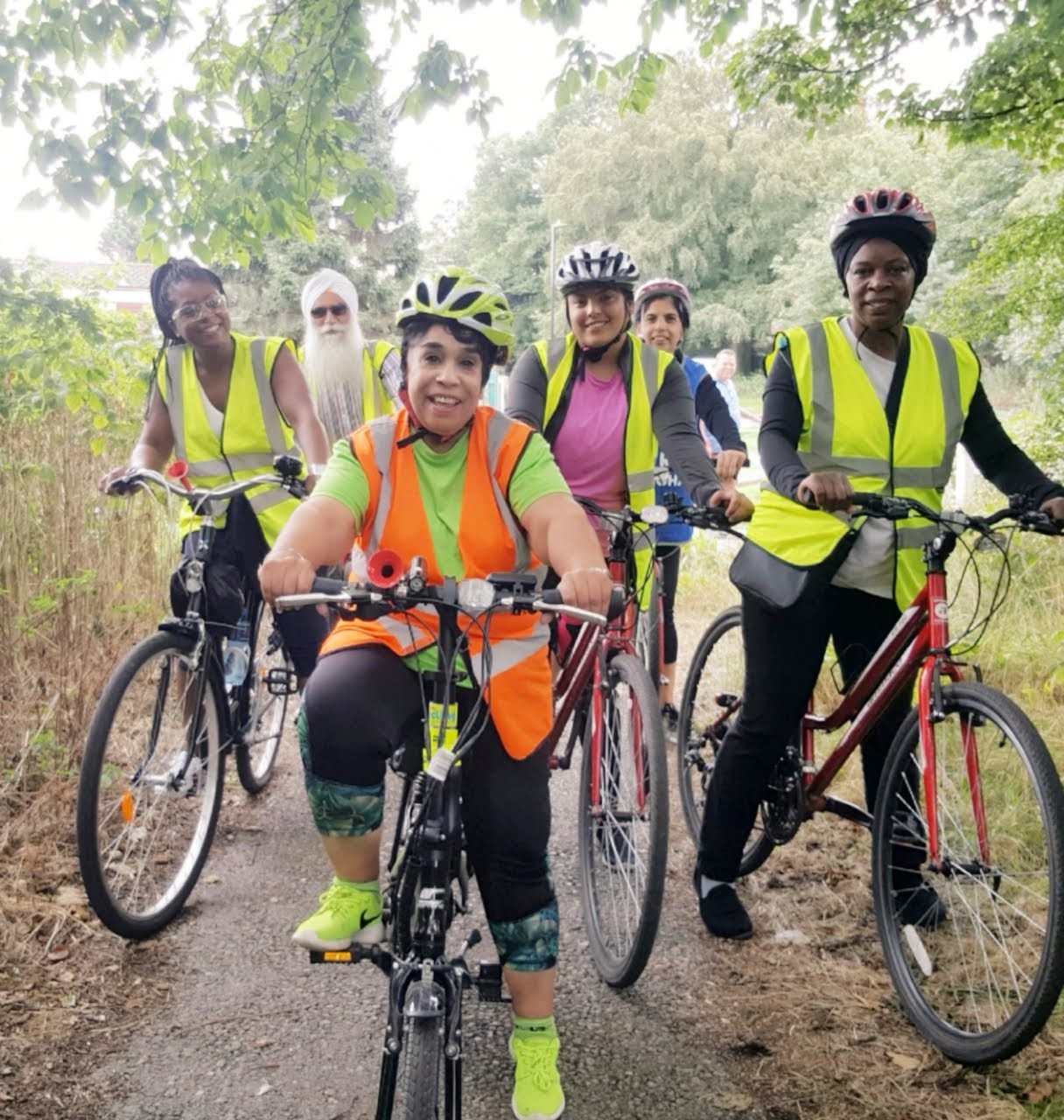 “We were so busy creating our new life we just didn’t have time – nor was there money for luxuries like bikes,” she explains.

Walking in her local park in May 2016, Sam came across a container of bikes and helmets.

After asking the instructor what it was for, she found it belonged to a women’s cycling club run by Big Birmingham Bikes, a local initiative encouraging people to cycle in the city, who offered free lessons.

I couldn’t believe I was finally learning to ride, especially as I was the oldest woman at my lessons

“I couldn’t believe it,” says Sam. “I asked if I could join and he said yes.

The following week, strapping on my helmet, I was really nervous. None of the bikes had stabilisers, so the instructor held mine while I sat on it, teaching me about brakes and pedals, helping me build my confidence without tipping over.

I couldn’t believe I was finally learning to ride, especially as I was the oldest woman at my lessons. It felt wonderful!”

Within five weeks Sam was cycling independently. Fast-forward three years and she owns three bikes and with help from Cycling UK is a qualified instructor, teaching on a voluntary basis.

“Learning to cycle made me realise it’s such a great way  to blow away the cobwebs and  I wanted to share that with other women,” she explains.