North Carolina jumped to a big lead, then in overtime held off the reigning champion Bears, who became the first No. 1 seed to be bounced from this tournament.

Send any friend a story

As a subscriber, you have 10 gift articles to give each month. Anyone can read what you share. 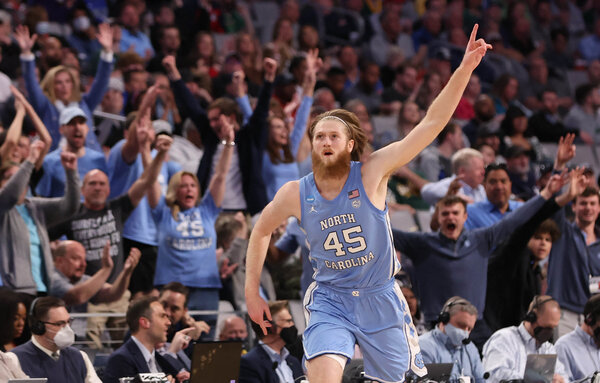 The University of North Carolina’s men’s basketball team spent part of December being crushed by Kentucky. January brought humiliations at Miami and Wake Forest. February included being embarrassed on its home court by Duke and Pittsburgh and requiring overtime to beat a woeful Syracuse.

Then came March. The Tar Heels went over to Duke and spoiled Mike Krzyzewski’s final game at Cameron Indoor Stadium on March 5. Then, in overtime on Saturday in Fort Worth, they upset Baylor, the No. 1 seed in the East region and the reigning national champion, to advance to the round of 16 in the N.C.A.A. tournament.

Each of those signature victories is of the stripe that can redeem any misbegotten season. But both? As Roy Williams, who retired as North Carolina’s coach last year but was in the stands on Saturday, might say: “Daggum.”

The eighth-seeded Tar Heels will meet either St. Mary’s or U.C.L.A. on Friday in Philadelphia.

They — and any other team remaining in this year’s men’s tournament — might be hard-pressed, though, to author a greater work of suspense than their 93-86 downing of Baylor, the first No. 1 seed to lose this year.

Yes, Baylor won the tipoff, and with Kendall Brown’s dunk off a fast break, built a 4-0 lead in all of 68 seconds. Then U.N.C. seized it and did not even allow the game to be tied until there were 15.8 seconds remaining and Baylor had improbably erased a performance by the Tar Heels that had seemed more likely to wind up in the record books than in overtime.

In the first half — after which the Tar Heels led by 13 — U.N.C. made half of its shots from the field, while Baylor sank 40 percent and struggled mightily behind the arc. They were nearly even in total rebounds, with U.N.C. having the smallest of edges. But Baylor’s turnovers fueled Carolina’s rise and accounted for 15 of the Tar Heels’ 42 points before the intermission.

Dive Deeper Into the N.C.A.A. Tournaments

The chaos of Saturday’s game was, in many respects, a fitting mark in North Carolina’s topsy-turvy debut campaign under Hubert Davis, who succeeded Williams.

The Tar Heels started to rise after the 9-point loss to Pittsburgh on Feb. 16 and have lost only once since, to Virginia Tech in the Atlantic Coast Conference tournament. Krzyzewski marveled over them this month, once his own team, then ranked fourth in the country, was done in by players like Armando Bacot, a 6-foot-10 junior who collects rebounds with the zeal of an Internal Revenue Service agent, and Brady Manek, who transferred from Oklahoma and came into Saturday’s game leading North Carolina in 3-pointers.

“We knew the potential of this team coming into this season, and we just wanted to turn it around,” R.J. Davis said on Friday. “We knew after the loss to Pitt, that wasn’t the way we wanted to play. So from that point on, I think we just turned it around and started to compete. And everyone bought into their roles and that’s kind of what we’ve been buying into.”

Helped along by a flagrant foul, Baylor got around to buying into the majesty of being a No. 1 seed. There is only so much a team can do, though, on an afternoon when it trailed by 25.

Waco-based Baylor, at least, avoided the overlapping indignities of a long trip home after a miserable loss, and, thanks to a victory over Norfolk State on Thursday, the ignominy of being the earliest exiting departing champion in tournament history.

Very little else went quite as the Bears hoped.

Baylor could not manage a basket for a stretch of close to four minutes in the second half. U.N.C. took that interlude and scored 13, building a lead of 24.

Much of that came from Manek, whose 9 points in the first half came to feel small by the end of the second, when he had 17. It is virtually certain that he would have finished with more than 26 points, but he was ejected with just more than 10 minutes to play after a flagrant foul.

His dismissal proved the catalyst for the kind of Baylor onslaught that, less than two hours earlier, would have seemed like a surefire route for them to Philadelphia.

One shot after another, one opportunity after another exploited, the Bears looked like the team most expected to swagger through Dickies Arena and advance.

Finally, with less than 16 seconds left, they tied the game at 80, where the score would stay until overtime.

Dontrez Styles, a freshman, hit an early 3-pointer to let U.N.C. regain control. Bacot made a free throw. U.N.C. would not have such a commanding lead until 78 ticks remained, and the Tar Heels were up by 6 after a flurry of free throws and layups from both teams.

Then, though, time ebbed further, and the score did not change much, with Baylor, which earned a share of the Big 12 Conference’s regular-season title, squandering chances that could have drawn them closer to salvaging an afternoon and a season.

Instead, North Carolina, a team to maybe forget not long ago, would be the program to play on in March.