Liverpool FC just beat Tottenham Hotspur 2-0 in the UEFA Champions League final after game defining moments at the start and end of the game.

The greatest soccer matches contested on the grandest of stages are frequently filled with unforgettable moments.

Artisan playmaker Zinedine Zidane was responsible for one moment in the 2002 final for Real Madrid when he volleyed past the reaches of Bayer Leverkusen goalkeeper Hans-Jorg Butt with a match-winning wonderstrike — a goal so good it remains a must-see attraction on YouTube today.

Steven Gerrard’s extraordinary leadership when Liverpool was 3-0 down to AC Milan in 2005 is another moment. He rallied his team, inspired a comeback that rattled the Italians so much it forced extra time at 3-3, and helped seal a successful trophy-winning shootout.

Moments do not always have to be positive. One year after Liverpool’s miracle comeback, Jens Lehmann stormed off his line to bring Samuel Eto’o to the floor with a wanton foul, earning a red card which changed the complexion of Arsenal’s final against Barcelona, one they ultimately lost.

When daydrinking soccer fans fraternized on the sun-kissed streets of Madrid on Saturday, June 1, dressed in club colors, playing music, and waving flags, they will likely have been talking about the unforgettable moments that defined their European seasons so far. 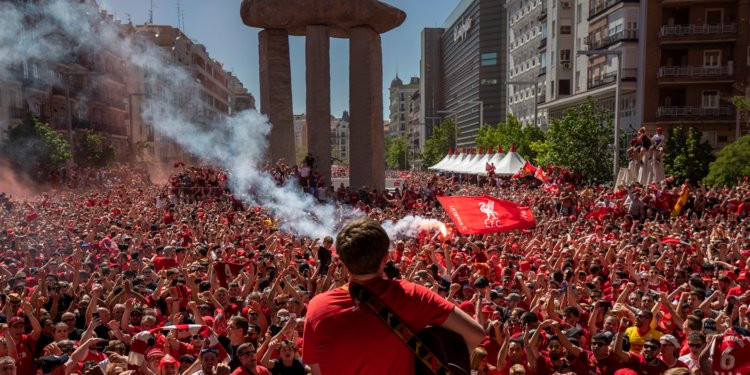 For Liverpool, that would have beenthe epic four-goal comeback that humbled Lionel Messi, dumping Barça out of the tournament at the semifinal stage in May.

Tottenham enjoyed its moment one night later, when it appeared the players were down at halftime, not yet out, managed to somehow consign Ajax to the scrap heap when Lucas Moura netted a stunning second half hattrick. A hattrick so good and so important, itbuckled the knees of Tottenham manager Mauricio Pochettino and reduced him to tears.

Read more:The home and away locker rooms at the UEFA Champions League final were an ‘expectation vs. reality’ meme brought to life

Yes, regardless of whether they’re good or bad, technically incredible or inexcusably violent, soccer is a sport best told through its moments.

And when it was time to play ball on Saturday in Spain, in the most important match of the 2018-2019 European season, one of those moments arrived 22 seconds after kick off.

Liverpool dominated a succession of individual battles as Jordan Henderson and Virgil van Dijk towered above their Tottenham counterparts, helping nudge the ball further to the final third. Holding possession in Tottenham’s penalty box, Sadio Mane turned and attempted to send a lobbed pass toward Henderson, who was roaming toward goal from the middle. But the ball never reached Henderson. It was blocked by Sissoko, striking his pectoral then his biceps.

Handball. Penalty. It was heartbreak for Spurs, but celebration for Liverpool.

Mohamed Salah placed the ball on the spot, just 12 yards from the goal line. It may seem far from the bleachers and television sets around the world, but for Tottenham goalkeeper Hugo Lloris it would have felt so close he could have heard Salah breathe, certainly his own heartbeat as it rattled his ribcage, pounding within his chest.

Moments like this are nerve-wracking with so much on the line because an early lead boosts morale for Liverpool, providing them a gift they can protect, or a morale-boosting save motivates Tottenham. It was a true sliding doors moment.

Standing in the heart of the D, Salah inhaled, eyeballed Lloris, and picked his target. Lloris tried to make himself big by jumping up and down on the spot, extending his arms as high as possible as a psychological ploy. Then Salah began his run — a combination of half steps and sprints — before lashing his left foot through the ball.

Or here if you’re in a different region: 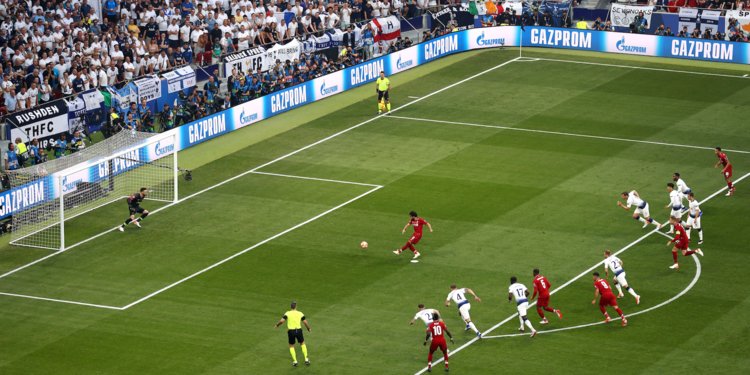 The first half had other moments but none of them were game defining.

Trent Alexander-Arnold, Salah, and Andrew Robertson all attempted shots on goal, yet only the latter hit the target with a left footed thunderbolt which forced Lloris to heroically palm the ball over the bar six minutes from the break. Had it gone in, Tottenham may have ended up on the ropes, but Lloris saved and Spurs lived to fight another half.

After the break, Liverpool’s full back pairing Alexander-Arnold and Robertson continued to attack, probe, and test Tottenham’s defensive system, with Robertson supplying Mane with a near point blank goal had it not been for brave blocking from Lloris.

James Milner could have doubled Liverpool’s lead midway through the half, Heung min-Son’s canny play allowed Dele Alli a dink on goal, and Son himself hit a thumping shot that eventually rebounded into Lucas Moura’s path but Liverpool goalkeeper Alisson pounced and locked a death grip onto the ball.

Ultimately, all this provided was desperate talking points for pundits post-match.

The truth is this … this match, a supposed showcase for Europe’s very best two teams, was poor. That 22 second goal, that early moment, had an extraordinary affect. It seemingly made both teams more nervous, sucking the industry and ingenuity out of the match, one that could have perhaps been played better had it been scheduled a few weeks ago to maintain the momentum from the end of the domestic season.

Liverpool will not care one iota as Divock Origi, the team’s two-goal semifinal hero from the 4-0 battering it gave FC Barcelona last month, stepped up once again to score his side’s second. It came from a corner, a scruffy goal that punished a Tottenham team for failing to clear the ball competently from its area, as Joel Matip sent a quick pass to Origi on the left who, emboldened from his exploits in the previous round, needed no invitation to shoot.

Origi sent his shot across the penalty area, past Lloris who had performed well since the early goal, and into the net. 2-0. Game over.