Months Before Season, N.F.L. and Players Clash Over Pandemic Workouts

Players on 14 teams announced they would not attend off-season programming because of concerns about the coronavirus. Some may give up financial benefits in the process. 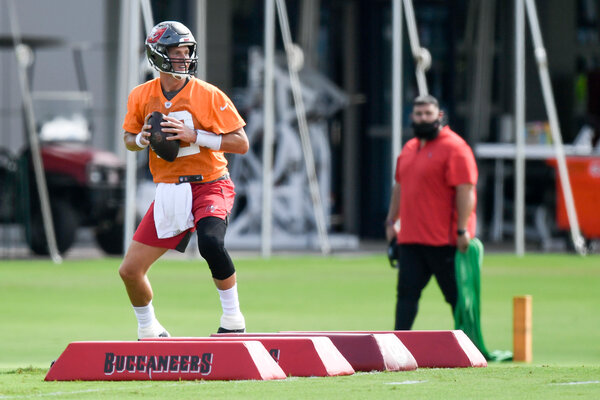 Five months before the regular season starts, the N.F.L. and its players are facing their first clash over playing in the pandemic, with players for nearly half of the teams vowing to skip voluntary off-season workouts.

Players on 14 of the league’s 32 teams, including the Giants, the Jets and the Super Bowl champion Tampa Bay Buccaneers, said in statements released by the N.F.L. Players Association that they would not participate in the workouts scheduled to begin Monday because of concerns it would be unsafe to gather.

Buccaneers quarterback Tom Brady was among players who spoke out to the news media and on social media.

“We feel very strongly about the game, the short- and long-term health of the players, and there is no game without strong, healthy players,” Brady said in a conference call with The New York Times and the union’s leadership. “People within the league may think, ‘Oh, let’s just get back to business, let’s go back to what we’ve usually done.’ But I think it’s really smart for people and players to think, ‘Is this the best possible way to do things?’ Not, ‘Is this tolerable, but is it the best way to deal with the situation?’”

The union has called for a virtual off-season — essentially players working out on their own away from team complexes — similar to what took place in 2020. Although a nationwide vaccine campaign is underway, the union argues that the danger is still high.

Last season, the N.F.L. shifted its off-season program to a virtual format, with the only in-person work happening at training camps in August. This spring, the union asked the league to use a similar format, while allowing for a mandatory minicamp in June. The league declined, citing protocols that it said would allow the workouts to occur safely.