About a month ago I caught up with my brother Kieren, a Sydney Swan, for our weekly coffee. I hadn’t watched the game he played in that weekend because I’d been at a back-to-back screening of Kill Bill 1 and Kill Bill 2 (for those wondering, one is far better than two). This meant I had to pretend I knew how the Swans went. Glancing at the stats on the way to the cafe I intended to reel off the names of players who’d done well, kicking things off with the usual “tough game?” opener.

During our conversation, however, it felt like I was more in touch with the game than the guy who had just played it. He was reacting slowly and taking a while to process everything I was saying. Something wasn’t right. He wasn’t fully there. 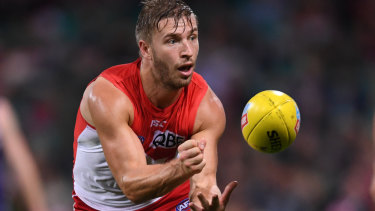 Swans veteran Kieren Jack had to take time to recover from a hit to the head.Credit:AAP

“What happened?” I asked, giving away that I hadn’t watched the game.

Turned out, after an early collision he spent most of the game on the sidelines until he had passed the concussion test and was cleared to return. As a result, he hadn’t done any training that week, the club doctors and physios were taking every precaution with him, including multiple CT scans. But a few days later he still couldn’t push himself in any form of training without feeling faint.

This had upset him because, as he said, it was “just a head knock”. He had feelings of despair and impatience that worsened when he wasn’t back playing after a week.

Hearing him talk was confronting because this usually switched-on guy was letting things slip without noticing. I told him that he shouldn’t rush it. That we wouldn’t bat an eyelid at a player missing weeks with a soft tissue injury, we’d just tell them to “get their body right”. And how much more important is your head than your calf or quad?

It was easy for me to preach patience because I no longer live in that football bubble. But for those in it, football is their job, and their passion, and they want to be on the field. Staying on the sidelines because of something they can't see can feel like an overreaction. And then there is the uncertainty; it’s not like a hamstring injury where you have to reach a certain strength mark or level of flexibility to get back on the park.

I say all this in light of Thursday's announcement by Royal Prince Alfred Hospital Neuropathology confirming that two deceased rugby league players had chronic traumatic encephalopathy, or CTE. This is a disease associated with repeated knocks to the head and carries serious ramifications, such as depression and memory loss, that can ruin lives.

In sports, playing through injury is a badge of honour. The respected warriors earn their stripes by limping over the line when expected to sit. We remember the game that so and so played with broken ribs, and speak in awe of the basketball player who limped back up the tunnel to take his free throws after rupturing his anterior cruciate ligament. I’ve even seen kids in junior sports ask to tape up their heads to imitate their favourite players, wishing that they could have claret dripping from their brow. When I was young, I would’ve welcomed a stray elbow to the head just so I could get stitches above my eye like my idols.

Injuries are a part of sport, there’s no way around it. Courageously throwing your body around creates the highlights that will be etched on your footy tombstone. But the result is many footballers get to the end of their career with a body a shell of its former self. More often than not I can tell a former footballer just by his stilted walk, which tells the story of pre-season after pre-season of pushing his body to its limits. Most players are happy with this exchange. They get to live their dreams. They do as much physical preparation as they can to combat the stresses their body will be placed under during their career.

But what more can be done to prevent the long-term repercussions of concussions? This recent discovery is crucial because it adds further weight to necessity of safeguarding all parts of players' bodies from the rigours of contact sport; heads as well as hammies.

Brandon Jack is a writer and a former Sydney Swan.