There is no drama as to who will be the No. 1 pick in this year’s N.F.L. draft. The only question had been which team would get the chance to draft Clemson quarterback Trevor Lawrence. The Jacksonville Jaguars secured that honor by way of the Jets’ seemingly not understanding that they were supposed to keep losing.

So with the knowledge that Lawrence, a Peyton Manning-like sure thing of a quarterback prospect, is going to Jacksonville to be paired with Coach Urban Meyer in a college-meets-pros marriage, here is a look at the other four quarterbacks likely to go in the top 10 of this year’s draft, which will begin on Thursday with the first round held in Cleveland. 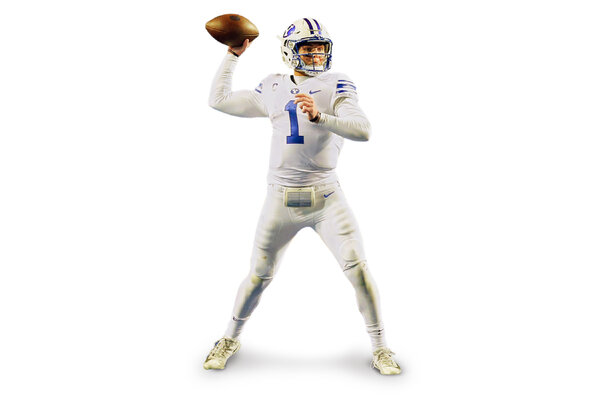 The reason Wilson is considered the consensus No. 2 pick: Aaron Rodgers. The reason the Jets, who hold the selection, might want to show at least a little caution: Johnny Manziel. Wilson has a strong and accurate arm, improvises well outside the pocket and has off-the-charts confidence — all the charisma and competitiveness that Rodgers and Manziel have in common.

But that approach yielded different outcomes for those two gunslingers in the pros, where Rodgers’s size and off-field steadiness were among the traits that made him more successful. Wilson’s daring did not work all that well against top competition in college, where he went 2-4 against top-25 teams, and it’s an open question whether it will work against disciplined N.F.L. defenses.

Wilson, 21, missed games in 2019 for surgeries on his shoulder and thumb, but if his 2020 season was a true reflection of his skill, the team drafting Wilson is getting a truly special quarterback.

Outlook: The Jets traded Sam Darnold to the Carolina Panthers in early April and it is considered nearly certain that they are set on Wilson as his replacement.

Fields grew up a few towns over from Lawrence in Georgia and has been in his shadow at each step along the way, especially after Lawrence won the national championship as a freshman. Fields transferred from Georgia to Ohio State for his sophomore season in 2019 and was a Heisman Trophy finalist (Lawrence didn’t make the cut). Lawrence and Clemson beat Fields and Ohio State in that season’s College Football Playoff semifinal, but Fields got his revenge the next season as the Buckeyes trounced the Tigers in another semifinal matchup.

Now Fields’s easiest comparison is to the Cowboys’ Dak Prescott, another big-bodied pocket passer who can surprise with his running if there’s an opening. There is no question that Fields regressed in 2020 compared to his breakout 2019 season, when he threw for 3,273 yards with 41 touchdowns against three interceptions. His labored release and tendency to hold onto the ball resulted in his taking sacks, but his arm strength and versatility, along with his strong effort against Clemson in a pressure-packed game, have turned the volume down on any questions. So did his head-on handling of publicly detailing his epilepsy diagnosis, which he has managed since his childhood.

Outlook: While not in the mix for the top two picks, Fields is the overwhelming favorite to be the third quarterback drafted Thursday, as his accuracy, his arm strength and his ability to run all make him an ideal fit for Coach Kyle Shanahan’s system in San Francisco.

College: North Dakota State (one season as a full-time starter)

Lance hasn’t lost a football game since Nov. 10, 2017, when his Marshall (Minn.) Tigers were topped by the South St. Paul Packers in Minnesota’s high school state quarterfinals. He hasn’t thrown an interception in a game since Oct. 13, 2017. After throwing only one pass at North Dakota State in his freshman year, he won the Walter Payton Award as the top player in the Football Championship Subdivision and led North Dakota State to an undefeated championship season in his lone year as a starter.

N.D.S.U. played its only fall game on Oct. 3, 2020, before Lance declared for the draft, meaning six months have gone by since anyone has seen him throw a competitive pass. Little matter for the right team. Lance is known as a film room addict with atypical passing mechanics abetted by a quick-enough release. His array of devastating play fakes, combined with his speed and power as a runner, give Lance a skill set that should translate at the pro level.

Outlook: Seemingly assured of being a top-10 pick, Lance is the fourth quarterback off the board in most mock drafts. His back story of people doubting his ability to handle the quarterback position is reminiscent of Lamar Jackson, his style of play is a little closer to Josh Allen, and Carson Wentz has proved that a player from N.D.S.U.’s program can succeed in the N.F.L. That is good company to keep.

College: Alabama (one season as a full-time starter)

Having come to Alabama in the same recruiting class as Tua Tagovailoa, and with Jalen Hurts entrenched at starter upon his arrival, it took a while before Jones got onto the field. It didn’t take Jones long to prove himself. As a fill-in starter in the 2019 season he led the Crimson Tide to a 2020 Citrus Bowl win, and in his lone season as the full-time starter he set a Football Bowl Subdivision single-season record for completion percentage with an eye-popping 77.4 percent.

Jones’s accuracy, his strong-enough arm and his ability to move around in the pocket (even if he almost never runs) make him an attractive prospect. There are questions, though, about the frantic nature of his play, his slow release, how he will improvise when his first option isn’t available and how much of his success was a result of his team having been comically loaded at every position on offense.

Outlook: Jones, 22, has been linked in some reports to San Francisco, which traded up to the No. 3 pick in late March. Shanahan watched his second pro day workout, as did New England’s Bill Belichick. The Patriots (who have the No. 15 pick) would have to trade into the top 10 to grab Jones before the quarterback-coveting Panthers (No. 8) and Broncos (No. 9) are on the clock.