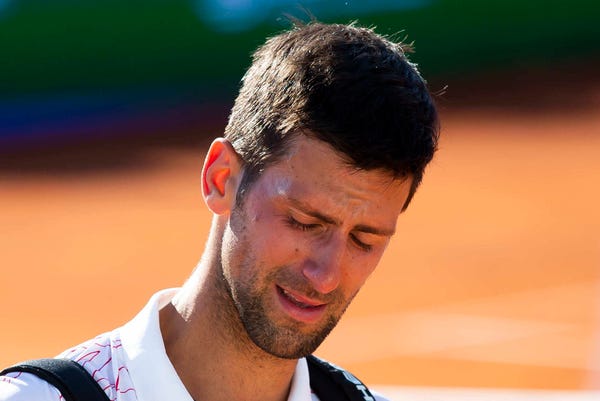 When Novak Djokovic looks back on his career, 2020 will probably be a year he will want to forget.

While the Serbian has been undefeated on the court, trouble has followed him at every turn, and his expulsion from the US Open on Sunday for hitting a line judge in the throat with a ball — albeit accidentally — was the icing on the cake.

"This whole situation has left me really sad and empty," the 33-year-old said on Instagram after the incident, adding: "I'm extremely sorry to have caused her such stress. So unintended. So wrong.

"As for the disqualification, I need to go back within and work on my disappointment and turn this all into a lesson for my growth and evolution as a player and human being."

In April, shortly after the outbreak of the global coronavirus pandemic, Djokovic admitted he would not be inoculated against the virus because he is "opposed to vaccination."

"I wouldn't want to be forced by someone to take a vaccine in order to be able to travel," he said.

"But if it becomes compulsory, what will happen? I will have to make a decision. I have my own thoughts about the matter, and whether those thoughts will change at some point, I don't know."

He latter added in a separate statement, according to ABC: "I am no expert, but I do want to have an option to choose what's best for my body. I am keeping an open mind, and I'll continue to research this topic because it is important and it will affect all of us."

Djokovic's comments came under heavy scrutiny from the Serbian government, with one of the country's lead scientists, Dr. Predrag Kon, slamming him for "creating misconceptions."

His Adria Tour turned into a coronavirus hotspot

In June, while almost every other professional sport around the world had come to a halt, Djokovic organized a tennis tournament across the Balkans, called "The Adria Tour."

Alongside some of the world's best tennis players, hundreds of fans were in attendance, many of whom wore no masks and failed to adhere to social distancing protocols.

Players also shook hands and hugged despite being advised otherwise, and many of them were caught partying topless at nightclub.

The event was then cancelled after just two of its proposed five legs, after Djokovic, his wife Jelena, and players Grigor Dimitrov, Borna Coric, and Viktor Troicki all tested positive for COVID-19. NBA star Nikola Jokic, who was pictured hugging Djokovic at one of the events, also tested positive.

"Prayers up to all the players that have contracted COVID-19," fellow tennis star Nick Kyrgios said on Twitter after the tournament's cancellation.

"Don't @ me for anything I've done that has been 'irresponsible' or classified as 'stupidity' – this takes the cake."

British No. 1 Dan Evans said, according to Sky Sports: "Put it like this, I don't think he should be planning a players' party and dancing all over each other and then two very good tennis players have tested positive. He should feel some responsibility in his event and how it's transpired.

On the eve of the US Open, Djokovic led a group of male in players in resigning from the ATP Player Council to form the Professional Tennis Players Association (PTPA).

The group, they said, would help players "have our voices heard and have an impact on decisions being made that [affect] our lives and livelihoods," according to ABC.

The exodus came under fire from Roger Federer, Rafael Nadal, and Andy Murray, as well the ATP, which said "now is a time for unity, rather than internal division."

Nadal tweeted: "The world is living a difficult and complicated situation. I personally believe these are times to be calm and work all of us together in the same direction. It is time for unity, not for separation."

Federer agreed, adding: "These are uncertain and challenging times, but I believe it's critical for us to stand united as players, and as a sport, to pave the best way forward."

Murray said that while he wasn't totally against the idea, he would not join because it was a male only body, according to The Independent.

It has since been reported by Sky Sports that Djokovic has been "in contact" with a number of women players, including Serena Williams and Sloane Stephens, about joining, though as it stands, the group remains male only.