NRL leading the pack with stance on Indigenous recognition

Stand by, sports fans, this is getting really interesting.

On the one hand rugby league has made appalling headlines for years for too many off-field atrocities to enumerate, begetting an image that would make a brown dog weep. A good section of the populous is still convinced that rugby league is filled with knuckle-dragging Neanderthals who have no higher calling than getting on the piss, abusing women, and starting fights. 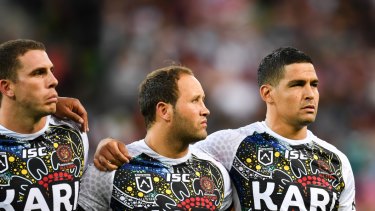 Taking a stand: Cody Walker, right, opted not to sing the anthem before the NRL Allstars match.Credit:NRL Photos

And on the other hand – and this is the fascinating part – the NRL has also positioned itself right at the forefront of progressive politics in this country, using its weight for positive change.

Two years ago, for example, the NRL was the strongest of all sports in supporting the same-sex marriage legislation, and not only had Macklemore sing his anthem One Love at the grand final  but saw his performance greeted by 75,000 delirious league fans who were clearly in full support.

As a tearful Ian Roberts said afterwards  when embracing NRL CEO Todd Greenberg: “This will save lives.”

But there was much more to come, and a lot in the last couple of days.

On Wednesday, the NRL was the one Australian sport which came out strongly in the company of thirteen other major Australian organisations – banks, law firms, universities etc – in support of the Uluru Statement, the simple, wonderful idea that, as former Liberal Party politician Fred Chaney put it, the First Peoples have “the right to be heard on issues that affect them". 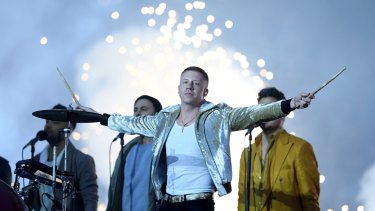 On song: Macklemore performs during the NRL grand final.Credit:AAP

But here is the wonderful thing.

This is not just the commissioners making decisions out on their own, because you now have leading players putting their weight behind it too.

In recent times there has been no more prestigious player in the game than Johnathan Thurston, and this week he has been vocal and eloquent in his support of the league on these matters, telling the Herald it is “absurd” Indigenous Australians are still waiting on such constitutional recognition.

“While we've made a lot of great steps in moving forward we've still got a long way to go,” he said. “I think people need to be educated on the history of our culture. I think that needs to start in our school curriculums. Rugby league has been a huge part of the Indigenous culture of the First Nations people for as long as I can remember. I think the NRL is doing the best they can, but again we've still got a long way to go.”

But the most powerful thing is the players themselves lining up behind the whole idea of Indigenous empowerment.

But the most powerful thing is the players themselves lining up behind the whole idea of Indigenous empowerment. On Wednesday, the Souths star and NSW Origin debutant Cody Walker announced he would not sing the national anthem before next Wednesday’s Origin I in Brisbane, just as he and other Indigenous players didn’t sing it during the recent All Stars game.

“I’m not pushing my views on anyone, it’s just how me and my family have grown up and how I feel,” Walker told the Herald. “I’ve already voiced my opinion, and I want to reiterate it’s just my opinion.”

Very broadly, it seems Walker’s view is that when the anthem is a paean to British settlement – the second verse runs "When gallant Cook from Albion sail'd,/ To trace wide oceans o'er/ True British courage bore him on/ Till he landed on our shore/Then here he raised Old England's flag/ The standard of the brave'' – and makes no reference to the First Peoples, then, as he said after the All Stars game, “the national anthem has nothing to do with me or my family".

The best thing of all? He and Thurston are getting no grief from the league community, and it is believed his coach Brad Fittler supports his right to make that quiet protest. Walker has already received support from Thurston, and I suspect will be supported by other Indigenous players, both with the Blues and with the Queenslanders. And who knows, but some white players might join them?

Compare all that with the grief visited upon the San Francisco 49ers quarterback Colin Kaepernick   when he took  a knee during the American national anthem to protest against police brutality on black Americans. Kaepernick was virtually black-balled from the NFL for his trouble.

No such thing will happen to Cody Walker. He is being supported by the greats of the game, and it seems the rugby league community itself.

So how did the same game that has been so backward for so long in so many areas of social progress  now find itself at the prow of progressive politics in Australia?

I have no clue. But good on the lot of them.