Okay, Boomers. At the end of a weekend that had produced plenty of surprises for the wider Australian Olympic team, several of them nasty, it was down to one of the more popular, experienced and high-profile outfits to provide a shot of morale.

Anxious Australian athletes would have been gathered around their TVs on Sunday night in Tokyo expecting the Boomers to look after them. 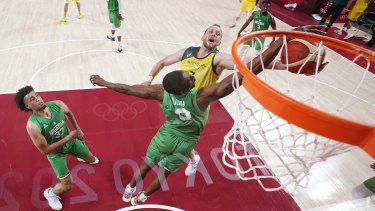 Joe Ingles drives to the hoop against Nigeria.Credit:Getty

The Australian men, ranked third in the world, fresh off a practice match win over the United States, were expected to account comfortably for the 22nd-ranked Nigeria at the Saitama Super Arena. Like the Tokyo Games themselves, the result was a while coming and beset by human and non-human error.

For the first half, the Boomers struggled to shake off a Nigerian team that outperformed Australia in rebounds and turnovers, harassed them with willing defence and deprived them of cohesion. With coach Brian Goorjian giving long slabs of game time to old heads Patty Mills and Joe Ingles, there were flashes of coordinated offence, but only flashes.

In an irony that would have been observed by those noting the absence of Ben Simmons, off seeking a cure for the free-throw yips, it was only Nigeria’s poor free-throw shooting that saved Australia’s blushes. Swap Nigeria’s free throw percentage for Australia’s on the night, and the result goes the other way. 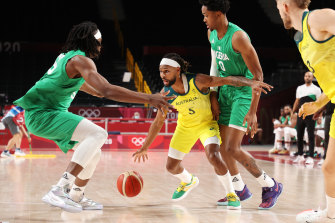 Patty Mills looks to find some space as the Nigerians close him down.Credit:Getty

Like some other Australian Olympians in the first few days of these games, the Boomers left the court with frowns on their faces and a look of puzzled frustration.

After a prolonged struggle, eventually class prevailed. Or, put another way, lack of class failed to prevail. As the game developed, Nigeria’s poor shooting spread from the free-throw line around the court, and while they continued to thwart Australia with their enthusiasm and physicality, there was no making up for their shooting inaccuracy.

As if another obstacle needed to be put in the way of the athletes at these Olympics, the shot clock horn went on the blink in the third quarter, leading to extended conferences, contingency plans and effectively a supplementary three-quarter time break for both teams. Just one thing after another. When play resumed, the ever-impressive Dante Exum landed a three-pointer, followed up with a steal, and the Australian gears looked like they were finally meshing.

But not really, or in any satisfying way. It was that kind of night. A six-point margin at the official final break was enough for confidence but not for comfort. The disqualification of Nigeria’s Chimezie Metu of the Sacramento Kings, for an unsportsmanlike foul on Matthew Dellavedova spelt the end of the contest when Dellavedova nailed his free throws, and from that point Australia strung some together nicer offensive play, with Mills at the forefront. The captain’s game-high 25 points were as reassuring as his solid 33 minutes of court time.

Australia’s win, by a final margin of 84 points to 65, was one of those looked better on the scoreboard than it would have felt, and will leave the Australians knowing they have work to do. It wasn’t pretty, and a more polished opponent would have held Australia to greater account.

“Jitters,” said Exum when asked later to explain Australia’s scratchy start. “Everyone wants to do so well and win this first match, and when we went to the locker room we sat down and said we need to get this together.”

Ingles, who was vocal in gingering up his teammates during breaks in play, said credit had to be given to the “up and in, full-court style of play” employed by the Nigerians, who had eight NBA players in their squad. “We need to be better with the ball,” he said, predicting that Goorjian ‘will get into us a little bit’ in the review of the game.

An unfazed Mills said the overall aim is a two-week project: to qualify out of the group stage and, simply, “to be the last team standing”.

At least the Boomers won’t have to worry about the hazards of peaking too early.

Never miss a medal or great sporting moment with our Olympic update emailed daily. Sign up for our Sport newsletter here.