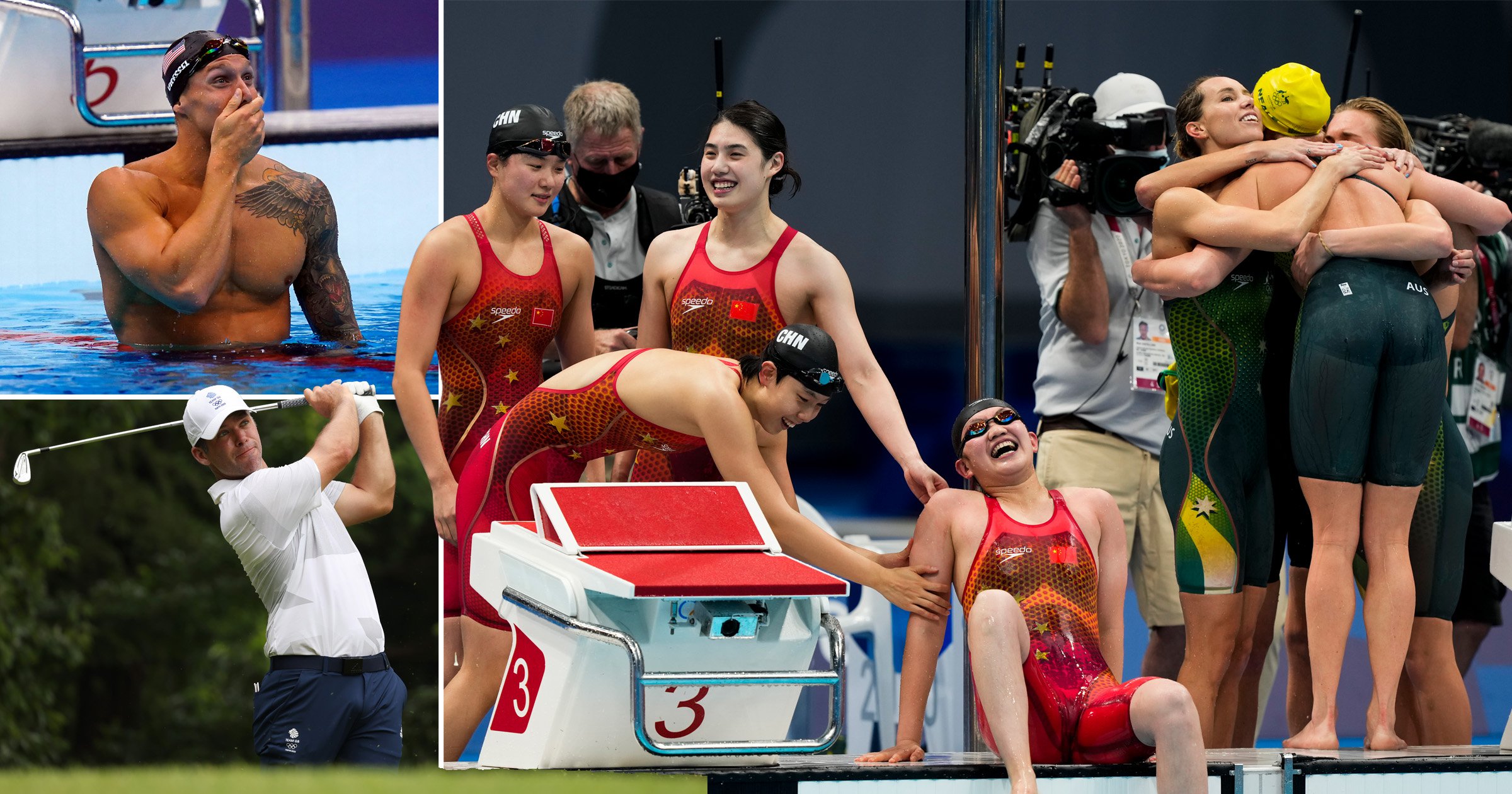 China moved to the top of the Olympics medal table on day six of the Tokyo Games after another thrilling session of swimming action, though Team GB agonisingly missed out on more podium finishes. Here’s everything you missed overnight…

The highlight of Thursday’s early action undoubtedly came in the women’s 4x200m freestyle relay as three teams all went under the world record – but it was China who stunned both Australia and the United States.

With Ariarne Titmus having won two golds already in Tokyo, the Aussies were the heavy favourites to win but China’s quartet of Junxuan Yang, Muhan Tang, Yufei Zhang and Bingjie Li went out at an astonishing pace.

USA were almost out of it but a truly stunning anchor leg from the brilliant Katie Ledecky saw them finish within a whisker of the Chinese, pipping Australia to silver in a remarkable race.

Elsewhere, American Caeleb Dressel won his first individual gold medal at the Games with a dominant performance in the 100m freestyle, setting an Olympic record in the process.

Team GB’s Duncan Scott, meanwhile, already has a gold and a silver in Tokyo and has put himself in contention to medal again tomorrow after going second quickest in the 200m individual medley semi-final.

Abbie Wood and Molly Renshaw are both through to the women’s 200m breaststroke final.

Team GB’s rowers had another disappointing day on the regatta as they narrowly missed out on the podium with two fourth-placed finishes, while Helen Glover was denied a fairytale return to the Olympics.

The 35-year-old mother of three, who was alongside Polly Swann in the women’s pair, may not have got a medal but she was still rightly happy with their performance: ‘We’re pleased with the result, it shows our hard work.’

There was even more drama in the women’s lightweight double sculls as Emily Craig and Imogen Grant missed out on a bronze medal by 0.01 seconds in an astonishing four-way photo finish. Team GB have now finished fourth in five events at the Sea Forest Waterway.

Paul Casey in contention as men’s golfers tee off

The men’s golf competition got underway in Tokyo, with Team GB having claimed gold through Justin Rose in Rio, and they are in contention once again this year.

Austria’s Sepp Straka has the clubhouse lead on eight under par but Paul Casey is just four shots behind in joint sixth place. Tommy Fleetwood is a couple of shots further back, while Rory McIlroy, representing Ireland, is currently one under par – though play has been suspended due to bad weather.

Elsewhere, in the men’s hockey, Team GB pulled off a superb comeback against the Netherlands to secure a 2-2 draw despite being on the backfoot for much of the match, progressing to the quarter-finals.

What else is happening on day six of the Olympics?

Normally the biggest attraction on Thursday’s schedule would be USA gymnastics superstar Simone Biles in the individual all-around final, but the 24-year-old has withdrawn from the event to focus on her mental health leaving the competition wide open. Twins Jessica and Jennifer Gadirova go for Team GB.

Elsewhere, Great Britain’s women’s hockey team face a difficult match against the Netherlands as they look to defend their title from Rio 2016, while the women’s rugby sevens side take on New Zealand in their second group match. Before all that, the women’s canoe final gets underway at 7.55am BST.