Home » On the Tennis Court, Lefties Can Be ‘Annoying’

On the Tennis Court, Lefties Can Be ‘Annoying’

As a child, Rafael Nadal hit with two hands from both sides until he was told to choose one side so he would have a single-handed forehand. Although the boy did most things right-handed, he instinctively started playing tennis as a lefty.

With his talent and his tenacity, Nadal likely would have been an all-time great no matter what, but being left-handed might have given him an edge — most notably, his high bouncing serve to a right-hander’s backhand has proved especially challenging for his rival Roger Federer. A win at Roland Garros would give Nadal 21 Grand Slams, one more than Federer. And since Nadal has won the French Open 13 times, including the last four years, he is the heavy favorite again in 2021.

The conventional wisdom is that being left-handed is an advantage in tennis. Lefties naturally hit with a slight side spin and can serve wide to a righty’s backhand in the ad service box on the most crucial points, and right-handed players suddenly find they need to adjust their tactics in rallies after days or weeks of playing only righty opponents. Switching gears during the tournament makes lefties “really annoying” to play, the player Matteo Berrettini said. 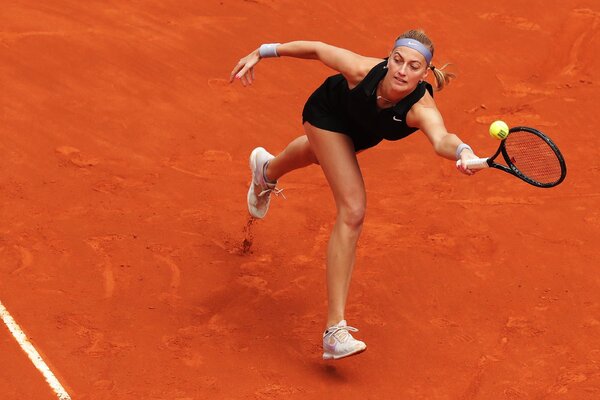 “Everybody doesn’t like to play lefties because it takes more thinking,” added Petra Kvitova, a two-time Wimbledon champion and the top lefty on the women’s tour. Even she gets thrown off when facing a fellow southpaw. “It’s a bit weird, because you want to hit to the backhand and suddenly their forehand is there,” she said.

Filip Krajinovic said he faced lefties once every month or two and had trouble with the adjustment. “It’s harder to play a lefty,” he said. “They have a different style of play, and it’s a little harder for me when they play their cross-court forehand high to my backhand, so I have to focus more on that side and really hit it deep cross court.”

There are exceptions, like Cristian Garin, who said: “I really like to play lefties. I think my serve is better against them.”

It is difficult to prove statistically whether lefties truly benefit — most righties would lose to Nadal simply because he is better, and most lefties would have the same fate against Federer or Novak Djokovic. But lefties do attain disproportionate success, especially on the men’s tour where the serve is such a vital weapon.

While lefties are about 10 percent of the world’s population, three of the Top-10 winners of Grand Slams in the Open era are men (Nadal, Jimmy Connors and John McEnroe), which does not even count Rod Laver, who won the final four of his 11 majors in the Open era.

In doubles, the four men’s teams with the most Grand Slam wins in the Open era all had one lefty. On the current ATP Tour, there are 15 lefties in the Top 100 and seven in the Top 50. Two of the greatest Grand Slam champions among women — Martina Navratilova and Monica Seles — are lefties, but the 10 lefties in the WTA Top 100 are in balance with the overall demographic.

Most lefties are not Nadal, of course, yet facing a southpaw still requires a little something extra.

“You have to plan for the match differently — there are different spins and different angles you have to play,” said Elena Svitolina, who recently beat the lefties Angelique Kerber and Kvitova back-to-back in Stuttgart, Germany, but then was upset by another lefty, Jil Teichmann, in Madrid.

Some players are more blasé about it then others. Svitolina said the major issue before facing a lefty was practicing return of serve, but Ashleigh Barty said that while she would seek out a lefty in practice before a match against a lefty, years of partnering in doubles with the lefty Casey Dellacqua meant returning “millions of her left-handed serves, so it’s not something that really concerns me.”

When Jan-Lennard Struff is not playing in a tournament, he tries mixing in practice against a lefty once a week. Garin’s coach is a lefty, which helps him practice serve returns, but if Garin has a lefty opponent coming up he will seek out another lefty from the draw to practice with or ask the tournament to find a sparring partner.

“It can be difficult to find someone, but you can usually access a hitting partner provided by the tournament,” the player Caspar Ruud said.

Service returns may be the biggest challenge, but Struff said that overall, “You need to adjust your patterns to play lefties.”

Dominik Koepfer, who is a lefty, said, “What I usually do against righties doesn’t work against lefties, so I need different tactics.”

Even as they make adjustments, the players said they tried not to get too caught up in the shift. “You do have to change up your game a little, but you can’t be too frightened to play to their forehand,” Ruud said.

Berrettini said he ultimately wanted to play to his strong suits. “I try playing to the weakest stroke of the opponent, but if I want to serve to the T on the deuce side where it’s a lefty’s forehand, I’m going to trust my weapon,” he said about serving down the middle of the court where the service box lines intersect.

Denis Shapovalov, the highest-ranked men’s left-hander not named Rafa, said, “I just play my game and go for my shots, so it doesn’t really matter, lefty or righty.”

But there are lefties, then there is Nadal, and there is Nadal at Roland Garros, where he has lost only twice. Even for someone as confident as Shapovalov, that can be intimidating. “I’ve never had to play Rafa there, but I imagine it’s not too much fun,” he said.

Krajinovic said he hoped that he would not get assigned to play Nadal at the beginning of the tournament.

“If I see him in the draw I will not be happy,” Krajinovic said.

Koepfer would like the challenge, but only under certain circumstances. “I hope it’s not the first round. I’d like to play righties in the first three rounds before playing Rafa.”

For anyone who has the misfortune of matching up with Nadal, Ruud suggested calling Robin Soderling or Djokovic, the only players to have beaten him at Roland Garros, for advice. “And then you just pray he doesn’t have his best day.”