They’re still people, you know. These young men and women you lionize or demonize, depending on the fortunes of the day, they’re people. Kids, in some cases.

Did you know E.J. Liddell, the undeserved target of abuse and threats all because Ohio State had a bad day collectively, has three siblings? That his favorite candy is Snickers and he considers himself unbeatable in video games? That he’s so unnerved by snakes that if he sees one in a movie, he checks his bed to make sure nothing is lurking? That he’s still a “student-athlete,” playing basketball for the love of the game, his only “compensation” the entertainment you and I get from watching him?

The kind of abuse Liddell was subjected to Friday night after the second-seeded Buckeyes were upset by Oral Roberts is never acceptable, never excusable, and the only good thing about it was the immediate pushback it got from Ohio State. Coach Chris Holtmann called the messages Liddell got on Instagram, “vile, dangerous and reflect the worst of humanity.” Athletic director Gene Smith warned that Ohio State would contact authorities on those who “cross the line and threaten our players.” 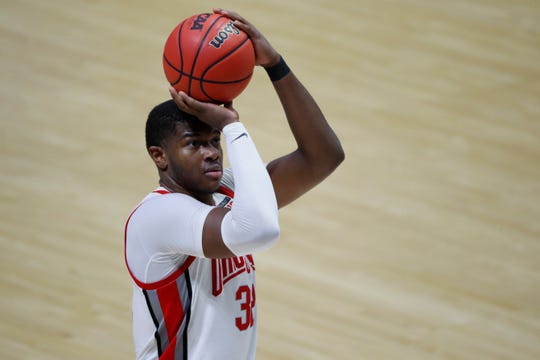 But it doesn’t take away the damage that was done.

“What did I do to deserve this?” Liddell asked after posting screenshots of the NSFW insults, abuse and threats directed at him by two “fans.”

“Comments don’t get to me but I just wanna know why. I’ve never done anything to anyone in my life to be approached like this.”

If you couldn’t hear the plaintiveness and pain in his post, then you have no heart.

He is not the first athlete to be targeted by people who have given sports outsized importance. Whose sense of self is so warped that they have lost the ability to separate their identity and well-being from the results of their favorite team or player. That doesn’t make it any less sickening.

The return of the NCAA Tournaments after COVID-19 forced their cancellation last year was supposed to be a joy, an excuse to exhale and pretend that, for three weeks at least, life is normal again. We could park ourselves on the couch and watch basketball from noon until midnight, trash talk with our friends and, when our brackets were inevitably busted, rue that we were silly enough to believe that Rick Barnes could ever be anything but Rick Barnes.

But Friday showed that nothing is safe from the meanness and sharp edges that have become staples in our society. A short time before Liddell publicized the abuse he received, a grown man in the stands at Winthrop-Villanova taunted players from both teams, angry at the prospect of the spread not being covered.

A 15th seed beat a No. 2 seed. Big deal. It’s not the first time it’s happened in the NCAA Tournament and it won’t be the last – maybe not even this weekend. It should not be the end of the world, and those who view it as such have lost their perspective.

Life is full of highs and lows, delights and disappointments. We are supposed to absorb the lessons from both and use them to become better, smarter people. Instead, too many of us have become convinced the bad times are some grand conspiracy, that they have to be somebody else's fault rather than just a happenstance of life.

That's as weak as it is ignorant.

Liddell is a basketball player. He might play for your favorite team or he might play for the team you love to hate. But when the clock stops and the lights on the court go out, remember that he’s no different than you are: