Paralympians See a Big Welcome in a Small Title Change

Jessica Long, a Paralympic swimmer, remembered feeling invisible at a large gathering with the news media in Chicago ahead of the 2008 Beijing Summer Games. She sat in a corner with two other American Paralympians, watching reporters interview their Olympic counterparts without paying any attention to the three of them.

“We’ve arrived,” said Long, now 27, a four-time Paralympian whose lower legs were amputated early in her childhood. She has won 23 medals. “When I was on the Beijing team with my friends, we were like: ‘Do you think we will ever get to that point? Do you think people will ever recognize Paralympics?’ For it to be in the name, it's a huge, huge step.”

Brad Snyder, one of three athletes on the U.S.O.P.C. board of directors, said he had tears in his eyes when he voted in Chicago. A Paralympic swimmer who is now training for triathlons, Snyder said he was overwhelmed to be part of the moment.

“It wasn’t the Paralympians in the room driving this,” said Snyder, 35, who served in the Navy and lost his eyesight after an explosion from a roadside bomb in Afghanistan. “It was everyone else, and that’s what made it so powerful.” 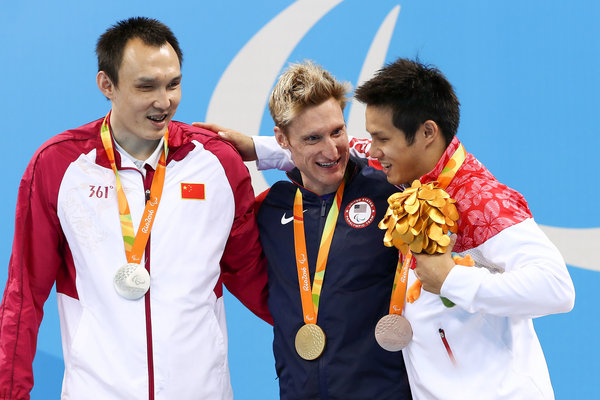 “It’s really the right thing for us to do as an organization,” Julie Dussliere, the chief of Paralympic sports for the United States Olympic and Paralympic Committee, said. “Paralympics has been part of the organization for a long time, and getting it into the name was that final push across the finish line to make sure it’s integrated into everything we do.”

Over the past two and a half years, the committee has been involved in a series of scandals, including the revelation of years of sexual abuse by Lawrence G. Nassar, a doctor who worked for U.S.A. Gymnastics and received the equivalent of a life sentence last year.

The committee’s chief executive, Sarah Hirshland, was appointed last summer in an effort to turn things around. She has been credited as the driving force behind the merger.

“I think since Sarah has come on board, we have made a lot of positive changes,” Dussliere said. “At this point, I think we have gotten really close to parity for everything that we do in the Olympics and Paralympics.”

Hirshland was not available for comment, a committee spokeswoman said.

The move toward the new name started last September with changes to Operation Gold, the program that pays American athletes for winning medals at the Games. Prize money for Paralympians is now the same as it is for Olympians: $37,500 for a gold medal, $22,500 for silver and $15,000 for bronze. Before the change, Paralympic medals were worth only $7,500, $5,250 and $3,750.

For many, that decision changed their lives.

“I was able to finally buy a house and to start up an actual life,” Andrew Kurka, 27, a Paralympic Alpine skier who is paralyzed from the waist down, said. “It’s a drop in the bucket, we get it once every four years, but it makes a huge difference.”

The merger mirrors broader changes in the way disabilities are discussed. Major League Baseball, which had used the term disabled list for more than 100 years, switched to the phrase “injured list” this year in response to arguments that injuries are not a permanent part of someone’s identity.

Mary Hums, a sports management professor at the University of Louisville, was one of those who had urged M.L.B. to change its language.

“I truly believe that the words we use shape the image of the world in which we live,” said Hums, who has worked with Team U.S.A. during four Paralympic Games. “Changing from the U.S.O.C. now to the U.S.O.P.C., what it does is it elevates athletes who were invisible now to a level of visibility.”

Coverage of the Paralympics has grown as well. In 2018, NBC aired more than 250 hours of coverage, a record and nearly double the amount the network provided in 2014.

“I am positive there are athletes out there that are very new to the Paralympic movement, and hearing the name change is going to bring in more athletes,” Long, the American Paralympic swimmer, said. “And honestly it really is all about the next generation.”