Home » Sport » Pascal Siakam Has Heard the Rumors, but He’s Ready to Lead

Pascal Siakam Has Heard the Rumors, but He’s Ready to Lead

In the fall of 2019, Pascal Siakam was riding high. He had just finished his third N.B.A. season and was well on his way to becoming basketball royalty in Canada, having just helped lead the Toronto Raptors to their first championship, alongside Kyle Lowry and Kawhi Leonard. Siakam was awarded a maximum contract extension, which gave him the status — at least financially — reserved for stars. He rewarded that faith from the Raptors by making his first career All-Star team that season.

This was an unexpected rise for Siakam, a Cameroon native who only picked up basketball at age 17 and spent two years at New Mexico State University before the Raptors selected him late in the first round of the 2016 draft.

Now, Siakam, 27, is facing questions about whether he can truly be a long-term cornerstone in Toronto. Last season, he struggled. The Raptors, who so recently had been top contenders, were one of the worst teams in the N.B.A., playing home games in Florida because of pandemic travel restrictions. Siakam’s play was well below a level expected of a star. To make matters worse, Siakam contracted Covid-19, causing him to lose 20 pounds. And then there was a postgame blowup with Coach Nick Nurse in March borne out of Siakam’s frustration with losing.

While Siakam’s play picked up in the last months of the regular season, he suffered a left shoulder injury that required surgery and ended his season in May. He is expected to miss the start of the 2021-22 season.

“I never had surgery before,” Siakam said in a recent interview. “I’m from Africa; I mean, if anything, my mom would try to give me some home remedy or something that can cure anything.”

Trade rumors have circled Siakam, but Masai Ujiri, who runs basketball operations for the Raptors, has downplayed trade talk publicly, as has Siakam’s agent, Todd Ramasar. In a conversation from Los Angeles, where he is rehabbing his injury, Siakam said he wants to stay in Toronto long-term, but admitted that after receiving the contract extension, he had some frustrations with Toronto’s front office. He also discussed his rehab, his relationship with the Raptors and Lowry’s departure to the Miami Heat. 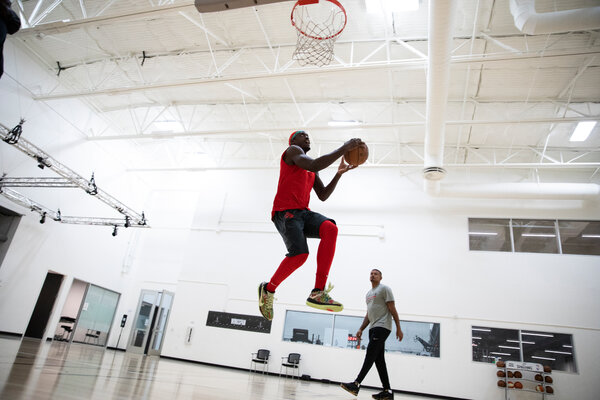 How is rehab going?

Are you even shooting or doing anything basketball-wise?

I was about to challenge you to one-on-one, but I won’t.

Definitely not right now. I don’t think I can beat anybody one-on-one right now.

Were you surprised that Kyle Lowry left for Miami?

I wouldn’t say I was surprised by it because obviously I could see it coming. When I was a rookie, these were the people that we look up to, right? It was Kyle. It was DeMar [DeRozan]. Kyle was like our big brother. We looked up to him and DeMar. So it was weird, obviously, to see them go. Sometimes, I’ll be thinking, “OK, Kyle is not here anymore, right?” You don’t really put it in perspective. Some of the questions obviously about what the team wants to do and things like that, they ask you. And before you felt like all those questions, I didn’t really have to answer them, because I felt like Kyle was there and now he’s not there.

Have you guys talked since he left?

We talk. We texted.

Obviously, it’s all love. He was just telling me: “This is your team. You know, I love you. Everything that we went through.” And: “Go ahead and do it. I’ll be watching out and see it.” And I think the same thing even for me. Honestly, he’s a legend, a Toronto legend. For me, [I said] “Hey, good luck out there. I’ll kick your butt when I see you.”

With Kyle gone, obviously now you’re even more of the guy now. Your agent says you’re happy in Toronto. Masai Ujiri, the team president, said your relationship is pretty healthy with the organization. How would you characterize it?

I think it’s growing, obviously. Because I just think that for me, I feel the love. Obviously, Masai, we go way back and I’ll always have a ton of respect for Masai and everything that he’s done for the continent [Africa].

For me at that point when I started becoming that person, I just felt like there wasn’t that much level of communication, to be honest. And that was the only thing really that I felt. It was like, “We got you the max contract, but are you the guy?” I think that’s something that I was struggling with.

What do you mean by that?

Obviously, Kyle was there, being a point guard. Kyle was, to me, always the greatest Raptor of all time. I think he was always like, “I was the guy.” I had the contract, but I never really felt like I was the guy, to be honest.

You wanted them to say, “You know, here’s the max contract. You’re the guy. You’re the centerpiece that’s going to take us to the repeat championship.”

Yeah. I never really felt like there was that. And I think those conversations are happening now.

Trade rumors are part of the business. But there must be a part of you after this season that said, “Whoa, I won a championship for you guys. I became an All-Star.” Is there a human side of you that is like, “Man, that’s messed up?”

Yeah. I think it is. Definitely. And I think it’s something that I’ll probably definitely struggle with. You know? And I think even just like the negativity about my name. For me, it was weird. Because I’m like, “Damn.” I’m such a positive person, the people that know me. People see my story, understand where I come from and all the things that I’ve been able to achieve so far in my career. It has always been about positivity, right? It’s always like good things. “How can you hate this person”-type of thing.

Coming to Toronto, I always felt like it was a perfect mix. Me and Toronto was always perfect because, OK, I’m international, I love the diversity about being in Toronto. I understand being an underdog. Toronto always feels like it’s that underrated type of city. The people always feel like they never get respect from the general American media.

I think for me, just seeing the negativity and all the slanders about me, it just made me feel some type of way, obviously, to be honest. It was just kind of disappointing and just kind of like, “Man.” I really did feel like just me going through tough times, it’s not going to change everything, right? I felt like we were connected. And obviously I understand like, man, this is a sport, right? You get paid the big bucks. You get paid to perform. I get that and I understand it.

Was there any irritation from you toward the Raptors that your name was surfacing so much in trade rumors?

I’m a really prideful person and I always want to be the best player that I can be, and the bubble wasn’t that. So I get it, I understand it, but also for me what really hurt me is one of those things about my dad or like, “Oh, your dad wouldn’t have been proud of this.” [Siakam’s father died in a car accident in 2014.]

You were seeing that on social media?

People, they told me about it because I was really off social media. I didn’t want to know about it, but I heard it was like, racist comments and things like that. For me, those were just the things that were sad about the whole thing.

Last season, you had that blow up with Nick Nurse. As you think about it now, did you feel like that was a low point in the season? Or was it blown out of proportion by people like me?

No, I don’t think it was that bad. Obviously, losing is not fun, right? No matter what you can say about the Raptors, we’ve been part of winning. OK, there’s years where we didn’t do well in the playoffs or whatever the case might be, but we’ve always had winning seasons since I’ve been here. It was always about winning. I mean, when you talk to Masai, he can’t finish three sentences without talking about winning. This is who we are. What we do in Toronto since I’ve been there is about winning. That’s all we do.

Fair point. But this seemed like it went a little further.

This is what happened: It was after a game. I’m just so frustrated. It’s like, “Oh, we’re losing and I’m just mad I didn’t play and I could’ve really helped my team.”

And we’re having a losing season and I think those things happen between a coach and a player. Obviously, I probably used language, uh, people use. It is what it is, but I don’t think it was such a big deal because after that situation happened, we talked. We are on good terms.

It was just an argument. Literally one argument and like: “Oh, I’m mad at this. I’m yelling and this is it.” That’s it. Grown men.

What are your expectations of yourself as you enter the new season?

I feel like when the season was ending, I was catching a rhythm, finally feeling good. “Man, I just had Covid. Lost 20 pounds.” These are things that I was going through, and I feel like I’ve always gotten better in my eyes. And I think there’s another level that I can definitely get to. And for me, I definitely see myself as an All-Star. Potentially, wanting to be a most valuable player in the league one day. But for me, I do think that there’s definitely a lot more to unleash into my dream that’s going to take me to the next level.

This conversation has been edited for length and clarity.