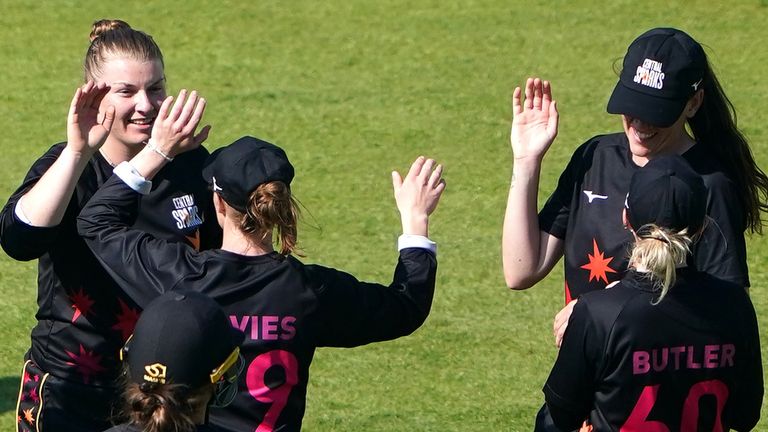 Emily Arlott took four wickets in an over – including a hat-trick – as Central Sparks thrashed defending champions Southern Vipers by 120 runs to maintain their 100 per cent record in the Rachael Heyhoe Flint Trophy.

The 23-year-old seamer trapped Maia Bouchier (1) on the crease with the first ball of her fourth over before claiming her hat-trick with the fourth, fifth and sixth deliveries. Southern Vipers vs Central Sparks scorecard

Georgia Elwiss (0) was also leg before, Charlie Dean superbly caught by the diving Amy Jones behind the stumps and Ella McCaughan bowled through the gate as the Sparks bowler finished with 5-29.

Arlott, watched by England head coach Lisa Keightley, could have had a sixth wicket had Gwen Davies not dropped Danni Wyatt on four.

Wong takes the final wicket, as Vipers are all out for 104.

4⃣ FROM 4⃣ – TOP OF THE TABLE! 👏#SparksWillFly💥 pic.twitter.com/LVaEHzRAQo

The England international went on to make 61, her third successive half-century, but Vipers were dismissed for 104 in 27.5 overs and suffered their first defeat of the season.

It was a bad day for the Vipers, who dropped four catches and donated 34 extras including 29 wides, while Sarah Glenn’s 40 off 37 balls helped Sparks to post 224 all out.

The Kent-born opener plundered 92, with a six and nine fours, as the hosts made light work of chasing down a victory target of 246. Davidson-Richards shared a second-wicket stand of 154 with fellow England hopeful Sophia Dunkley, who also fell for 92 shortly before victory was secured with 41 balls to spare.

Earlier, England skipper Heather Knight top-scored for Storm with 73, while skipper Sophie Luff made 55 in their total of 245-8 and Stars’ Tash Farrant claimed 4-58.

In the picturesque university setting, England opening bowler Katherine Brunt was at her destructive best, taking 3-11 and combining with Beth Langston (2-12) to skittle the Sunrisers top order and leave them reeling at 16-5.

And that's it! Diamonds win by nine wickets after @Sunriserscrick are skittled for 53. Armitage 14* and Sciver 9* see the visitors home for a commanding victory. pic.twitter.com/AtWsJdfeIo

Diamonds captain Hollie Armitage was keen to get the match finished quickly and she and Nat Sciver hit two boundaries apiece to bring up the total inside eight overs and inflict a nine-wicket defeat on Sunrisers, their third consecutive loss of the tournament.