WWE star Roman Reigns retained his Universal title with a hard-fought win over Kevin Owens at the Royal Rumble.

The Tribal Chief spent a portion of the match handcuffed while KO was thrown 20 feet through a table during a brutal Last Man Standing match. 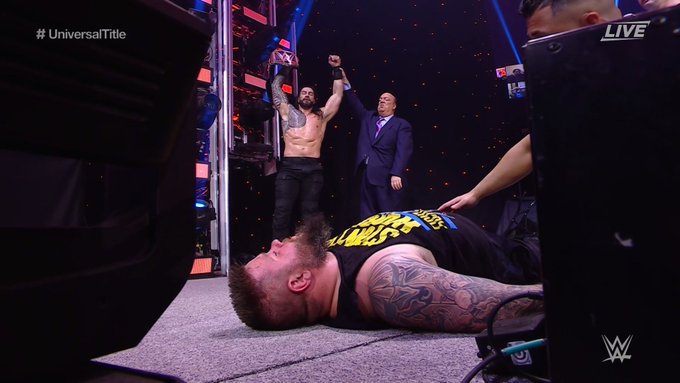 The pair largely fought backstage where Reigns even RAN Owens over with a golf cart.

Yet the main spot in the enthralling encounter saw KO deliver a stunning senton from the top of a forklift.

One fan tweeted: "This is one of the best big title matches in Royal Rumble history."

A third added: "F**** hell. Roman Reigns and Kevin Owens are leaving it all out there!"

User AlexandraKLee wrote: "Yo this Reigns-Owens match is something else."

Reigns ultimately retained his Universal title after managing to lock in a guillotine submission to finally put Owens to sleep.

But the Big Dog was given an almighty scare after KO succeeded in chaining him to the floor that almost allowed the ref to complete the ten count.

In a fit of desperation Reigns grabbed the official and slammed him against the steel to give Paul Heyman the time to free him.

Elsewhere on the over-the-top-rope PPV, Bianca Belair set a new Royal Rumble record as she earned her spot at WrestleMania.

And Drew McIntyre survived three spears from Goldberg to defend his WWE title from the clutches of the Hall of Fame icon.