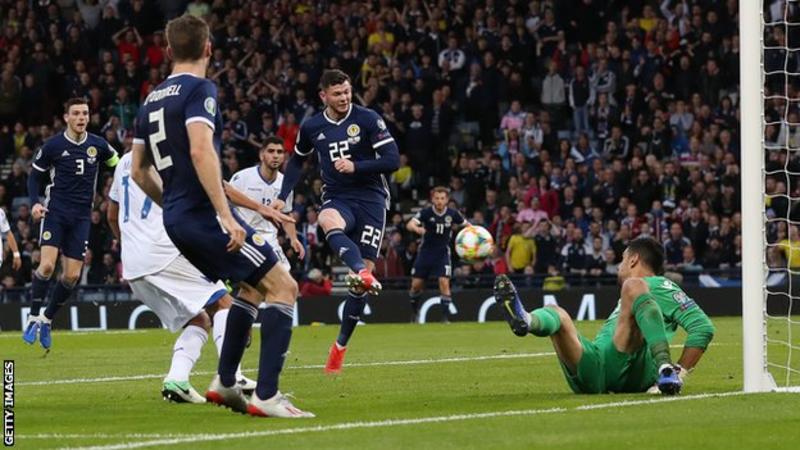 Steve Clarke’s reign as Scotland head coach got off to a dramatic start thanks to Oliver Burke’s late winner against Cyprus in Euro 2020 qualifying.

It had appeared as if the Scots would suffer another calamitous result – after the opening group defeat in Kazakhstan – when Ionnis Kousoulos was left unmarked to head in from a corner with three minutes to play.

That cancelled out Andy Robertson’s stunning opener on the hour. But, with a minute to play, Burke tapped home after his header struck a post.

The win keeps Scotland level in the section with second-placed Russia – who thumped San Marino 9-0 – and three points behind Belgium, who eased to a 3-0 victory over Kazakhstan. Clarke will now take his side to Brussels to face the Belgians on Tuesday.

‘It was frantic, nerve-shredding, stuff’

Clarke’s biggest selection calls came at the back and up front, David Marshall coming in from international football’s no-man’s-land to displace Scott Bain and Kilmarnock’s Eamonn Brophy getting the nod – and his debut – ahead of Burke, the hero-in-waiting, as the lone striker.

Hampden was far from full – a shade over 30,000 – but Clarke’s elevation gave the place a confident air. The optimism was tested, it has to be said. Big-time. Until Robertson took Cyprus’ net out by the roots with that magnificent drive, the home crowd were anxious. Some frissons of discontent were raised. The captain turned the concern into relief and hope.

Then, panic again later on when the equaliser came. It was frantic out there. A win, but not the comfortable experience many would have predicted. Drama, yes. But way, way too much of it from a Scottish perspective. This was nerve-shredding.

Scotland had some dangerous players on the pitch – a Champions League winner in Robertson; one of the Premier Leagues’s most creative forces in Ryan Fraser; two treble treble winners in Callum McGregor and James Forrest; and John McGinn and Kenny McLean, who have just been promoted to the English top flight.

A lot of quality, but precious little of it transferred into this performance before Robertson’s thumping moment unlocked Cyprus. Scotland lacked cutting edge. They occasionally threatened down the left but everything petered out on the back of a well-organised Cypriot side and a Scottish team that took a long time to find the accuracy to break them down.

Charlie Mulgrew’s free-kick midway through the opening half tested Urko Pardo in the Cyprus goal and Fraser had a decent claim for a penalty, but that, pretty much, was the extent of the threat for fully 60 minutes.

The visitors, meanwhile, had a half chance through Antreas Makris and another through Pieros Sotiriou. They had a third opportunity when Matija Spoljaric forced a save from Marshall. That last Cypriot flurry brought more unease among the home support. This was not how the Clarke era was supposed to begin.

All of that angst vanished for a little while when John McGinn played a square pass to Robertson, who was running free outside the Cyprus box. One touch set it up and the second produced an unstoppable howitzer that flew past Pardo. Clarke turned and punched the air. His reign could scarcely have been launched by a finer goal.

The Scotland manager brought on Burke for Brophy, then Scott McTominay appeared for McGinn just after the Aston Villa midfielder put his team in serious trouble when ransacked of possession not far from his own goal. Makris’ deflected shot had Marshall retreating to push it over.

Scotland had a chance to take the heat out of it when a fine counter-attack saw Stephen O’Donnell, after a terrific run off the ball, bore down on goal, only for the Kilmarnock defender to lift his effort over the goalkeeper but wide of the left-hand post.

The really pulsating stuff had yet to come. Fraser scurried away and had his curling shot beaten away for a corner by Pardo. In that moment, Scotland lost all reason. The corner was awful and when Cyprus countered they won a corner of their own. Again, Scotland lost the plot.

Ioannis Kousoulos evaded Robertson and, with time and space, he nutted past Marshall. The goal stunned Hampden. The doomsday scenario had become real. The horror show that the Tartan Army thought they had left behind with a change in management was back in force.

The twist was extraordinary. Fraser’s cross from the left was met by Burke’ giant leap, his header coming off Pardo’s left-hand post. Agony. But no, the rebound fell kindly and the striker put it away. Cue delirium. Cue relief. Cue Clarke reacting like a man who had got out of jail on his big night.

Torture, but three points. Belgium next for Scotland. Gulp.

‘We have to get used to Clarke’s way’ – analysis

The positives are I don’t think we were outplayed or overly dominated. When Cyprus had the ball, they played and they passed – we allowed them to do that because of the way Steve wants them to play. That’s something we’re all going to have to get used to – that, when the other team’s got possession of the ball, we are happy to concede possession of the ball as long as it’s not in dangerous areas. We’ll sit in, we’ll keep our shape and, if you’ve got the ball for three or four minutes and you are not hurting us, that’s okay in Steve’s book.

I’m delighted for Steve Clarke that he’s got off to a winning start, which is the most important thing. It’s oh-so-disappointing that we lost such a soft goal and the fact it came from our corner kick and them counter-attacking and getting one themselves and a free header. There would have been doom and gloom again if we hadn’t won, but we did win it and we showed great character. 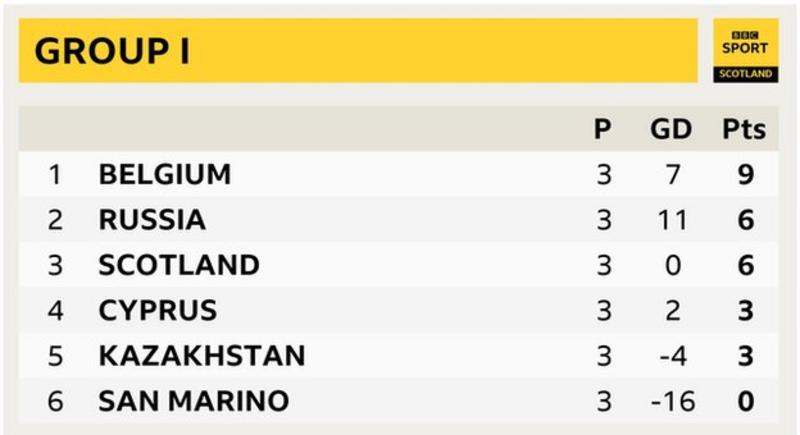 Attempt missed. Giorgios Efrem (Cyprus) right footed shot from outside the box is high and wide to the right from a direct free kick.

Ioannis Costi (Cyprus) wins a free kick in the attacking half.

Kostakis Artymatas (Cyprus) wins a free kick in the defensive half.

Oliver Burke (Scotland) hits the right post with a header from the centre of the box. Assisted by Ryan Fraser with a cross.

Goal! Scotland 1, Cyprus 1. Ioannis Kousoulos (Cyprus) header from the centre of the box to the bottom right corner. Assisted by Anthony Georgiou with a cross following a corner.

Attempt saved. Ryan Fraser (Scotland) right footed shot from outside the box is saved in the top right corner. Assisted by Scott McTominay.

Attempt saved. Giorgios Efrem (Cyprus) right footed shot from outside the box is saved in the bottom left corner. Assisted by Kostakis Artymatas.

Attempt missed. Stephen O’Donnell (Scotland) right footed shot from the left side of the box is close, but misses to the right. Assisted by Ryan Fraser with a through ball following a fast break.

Attempt saved. Andreas Makris (Cyprus) right footed shot from outside the box is saved in the top centre of the goal. Assisted by Pieros Sotiriou.

Kostakis Artymatas (Cyprus) is shown the yellow card for a bad foul.

Callum McGregor (Scotland) wins a free kick in the attacking half.

Delay over. They are ready to continue.

Delay in match because of an injury Matija Spoljaric (Cyprus).

Attempt saved. Callum McGregor (Scotland) right footed shot from the right side of the box is saved in the bottom right corner. Assisted by James Forrest.

Attempt blocked. Ryan Fraser (Scotland) right footed shot from the centre of the box is blocked. Assisted by John McGinn.