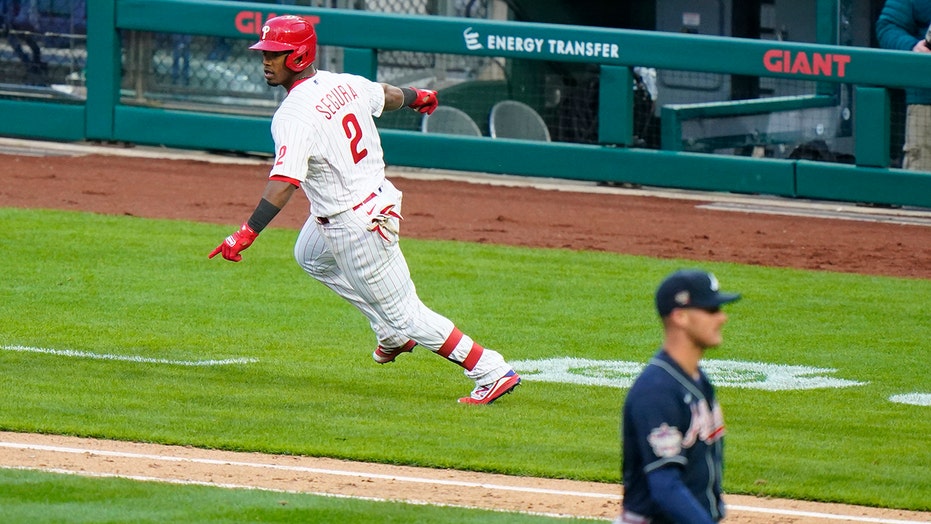 Jean Segura hit an RBI single with two outs in the 10th inning to lift the Philadelphia Phillies over the Atlanta Braves 3-2 in their season opener Thursday.

After Nate Jones (0-1) intentionally walked Did Gregorius, Segura hit a bouncer down the third-base line to score Bryce Harper, who began the inning as the automatic runner at second base and advanced to third on a grounder.

In the top of the 10th, center fielder Roman Quinn made a perfect throw to the plate to retire Ozzie Albies, who was trying to score on Marcell Ozuna’s fly ball. Catcher J.T. Realmuto caught the ball and slid in front of the plate in one slick motion, successfully blocking Albies’ path.

Phillies ace Aaron Nola was one strike away from tossing seven scoreless innings before pinch-hitter Pablo Sandoval ripped an 0-2 pitch into the second deck in right field to tie it at 2.

The Phillies got 3 1/3 scoreless innings from four relievers, with Connor Brogdon (1-0) working the 10th. They had the worst bullpen in the majors last year, blowing 14 saves with a 7.06 ERA.

Hard-throwing lefty Jose Alvarado struck out three batters in the eighth despite loading the bases. His fastball hit 100 mph on a few of his pitches. Hector Neris threw a 1-2-3 ninth, aided by shortstop Gregorius’ sliding, over-the-shoulder basket catch in shallow left field to deny Albies a hit.

Nola gave up two runs and six hits in 6 2/3 innings, striking out six. The right-hander tied Hall of Famer Juan Marichal for most starts against the Braves on opening day with three.

Atlanta’s Max Fried gave up two runs and six hits in five innings, striking out eight. Fried became just the fourth left-hander since the Braves moved to Atlanta in 1966 to start on opening day and the first since Tom Glavine did it in 2002.

Realmuto’s RBI single in the third gave Philadelphia a 2-0 lead. Rhys Hoskins hit a double with one out, advanced to third on Harper’s single and scored on Realmuto’s grounder to right. Harper was thrown out trying to reach third on the hit.

Bohm saved two runs in the sixth, using his 6-foot-5 frame to make a leaping catch on Ozuna’s hard liner that was headed toward the left-field corner with runners on second and third.

A crowd of 8,529 returned to Citizens Bank Park for the first time since 2019 because COVID-19 prevented fans from attending baseball games last year. They made their presence felt with loud boos when Harper was called out at third and a video review upheld the call.

Braves: Right-hander Mike Soroka, who started the season opener last year, opens on the injured list after tearing his Achilles tendon last August. Soroka threw two innings in the final exhibition game and could return to the rotation this month.

The series resumes Saturday with RHP Zack Wheeler going for the Phillies and RHP Charlie Morton making his first start for the Braves. Wheeler was 4-2 with a 2.92 ERA last season. Morton was 2-2 with a 4.74 ERA for the Rays.