It was unclear whether the sprinter, who won the women’s 100-meter race at the U.S. Olympic trials, will be allowed to compete in the Tokyo Games. 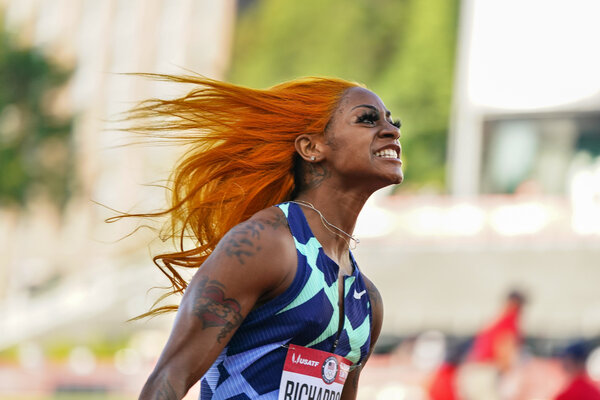 By Kevin Draper and Juliet Macur

The American sprinter Sha’Carri Richardson, who was set for a star turn at the Tokyo Olympics this month, tested positive for marijuana at the U.S. track and field Olympic trials, according to two people with knowledge of the test results who requested anonymity because they were not authorized to discuss the situation.

Richardson, 21, won the women’s 100-meter race at the U.S. trials in Oregon last month, but her positive test automatically disqualified her from that marquee Olympic event. It is unclear whether she will appeal the test result and the disqualification.

U.S.A. Track & Field has notified other women who competed in the 100-meter final about the failed drug test, according to one person with direct knowledge of that information, and several have been told that they have moved up a spot in the final standings.

Jenna Prandini, who was fourth at the trials, has been notified that she now will be one of the three American women running the 100 meters in Tokyo, and Gabby Thomas, who finished fifth at trials, was named as an alternate for race, the person said.

News of the positive test was first reported by The Gleaner, a newspaper in Jamaica. Representatives for U.S.A. Track & Field, the United States Anti-Doping Agency and the Athletics Integrity Unit, the independent antidoping arm of World Athletics, did not respond to requests for comment. Renaldo Nehemiah, Richardson’s agent, did not respond to a phone call or text message.

Marijuana is on the World Anti-Doping Agency’s list of prohibited substances. Both USADA and the United States Olympic & Paralympic Committee are signatories to the WADA code, meaning they follow its rules.

The drug is only banned in-competition, which is defined as beginning at 11:59 p.m. on the day before the competition and ending at its conclusion. Athletes may have up to 150 nanograms per milliliter of THC, the main psychoactive substance in marijuana, without causing a positive test.

According to USADA, marijuana is a prohibited substance because it is considered both performance enhancing and a drug of abuse.

The suspension length for testing positive for marijuana can be up to two years. The minimum length is one month, if an athlete can prove their use of marijuana was not related to sports performance and if they complete a substance abuse treatment program. Just last month USADA suspended Kahmari Montgomery, a middle distance runner, one month after he tested positive for marijuana.

While Richardson’s suspension could be over by the time the Olympics begin, the positive test wipes her Olympic trials performance from the books. Unlike the Olympic selection processes of some other countries, U.S.A. Track & Field’s procedures leave little room for discretion. They dictate that the top three finishing athletes in a given event at the trials qualify for the Olympics, provided they have reached the Olympic standard.

It is possible that Richardson could still compete in the 4×100-meter relay. Up to six athletes are selected for the relay pool, and four of them must be the top three finishers in the 100 meters at the Olympic trials and an alternate. But U.S.A. Track & Field names the remaining two members of the relay pool.