When the COVID-19 pandemic upended the college sports world and threw athletic department budgets into tailspins, some sports were on the receiving end of cuts.

In some cases, Division I schools went so far as to eliminate programs. The Stanford Cardinal announced over the summer it would cut 11 teams, including the wrestling squad, at the end of the 2020-21 academic year.

That didn't stop Shane Griffith from reaching the top of his weight class. Griffith won the 165-pound national championship over the weekend by defeating Jake Wentzel of Pittsburgh — he was also named Outstanding Wrestler of the tournament — and did so while wearing a black singlet.

Griffith and his teammates wore the alternate attire, sans the school logo, to signal their displeasure with the university's decision to drop the program after this season.

"Just some more motivation to go along with it," Griffith said Saturday.

"I was actually not planning on wrestling this season, given our circumstances at Stanford," the redshirt sophomore continued. "It just seemed unfeasible to get where I wanted to be in time. Then along the way I was talking to coaches, staying motivated, trusting the process almost, kind of cliché.

"In the middle of the night one night I just texted my dad. I said, 'You know what, we're not gonna question it. We're gonna rip it and we're gonna win NCAAs this year.' And he said, 'All right, buddy, I'm going with you.'"

Stanford’s Shane Griffith has become a national champion after the school made the decision to cut its wrestling program.

Griffith and teammates wore black singlets in the NCAA championships in response to the program being dropped.

Program alumni — through a group called "Keep Stanford Wrestling" — have fundraised $12.5 million to go toward future operational costs. They have also partnered with a larger athlete-alumni group called "36 Sports Strong" that includes Sen. Cory Booker of New Jersey and is pressuring the administration to back off its cuts. 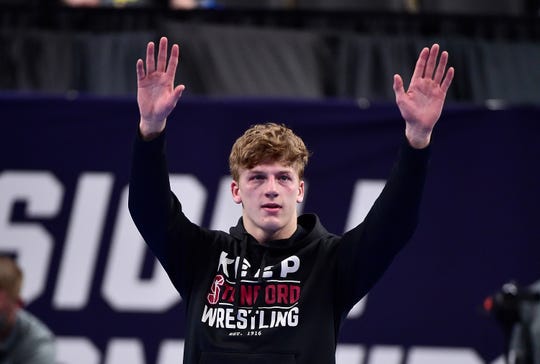 Griffith was the 2020 Pac-21 Newcomer and Wrestler of the Year and went 7-1 this season. On Saturday, he heard loud chants of  "Keep Stanford wrestling!" from fans at the Enterprise Center in St. Louis.

"It shows how close the wrestling community is," the New Jersey native said. "I had to turn my phone off for a bit just because I've received so much support from everyone here.

"Obviously, just want to make this nationally known, hopefully get it overturned. We got a lot of young guys staying, trying to fight the battle."

For those who want to help, they can start by emailing school administrators, Griffith said while wearing a black "Keep Stanford Wrestling" hoodie.

"I don't know. I think I played my role here," he said. "Hopefully this is a big turnaround in their decision."