Home » Sport » Skip Bayless criticized Dak Prescott for going public with his mental health struggles after his brother’s suicide, but big names in sports have come to the QB’s defense

Skip Bayless criticized Dak Prescott for going public with his mental health struggles after his brother’s suicide, but big names in sports have come to the QB’s defense 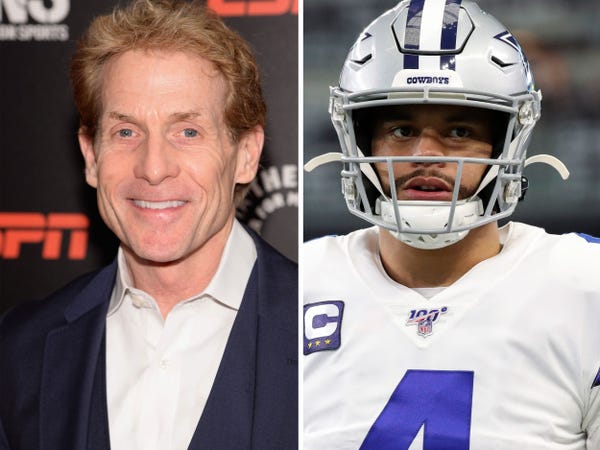 With just days to go before his first game of the 2020 NFL season, Dallas Cowboys quarterback Dak Prescott spoke openly about his mental health struggles.

In a candid, emotionally-charged episode of "In Depth with Graham Bensinger," Prescott revealed that he battled anxiety, depression, and insomnia while grieving for his brother who died by suicide earlier in the year. The fifth-year superstar said he sought help because he felt overwhelmed trying to deal with everything on his plate.

The two-time Pro Bowler said his symptoms became so severe that he lost motivation to train and prepare for the upcoming season.

"I didn't want to work out anymore," he said. "I didn't know necessarily what I was going through, to say the least, and I hadn't been sleeping at all."

The added grief of losing his brother, Jace, made for one of the most grueling offseasons imaginable. And though it was visibly painful for Prescott to discuss his "best friend," he acknowledged the importance of being vocal about mental health issues and encouraging people to speak up when they're struggling.

"So we have to share those things," he added.

On Thursday, sports analyst and "Undisputed" co-host Skip Bayless criticized the quarterback for speaking out about his recent emotional challenges.

"I don't have sympathy for him going public with 'I got depressed, I suffered depression early in COVID to the point that I couldn't even go work out,'" Bayless said. "Look, he's the quarterback of America's team. You know and I know the sport that you play, it is dog eat dog. It is no compassion."

The talking head then went on to imply that acknowledging mental health struggles is a sign of "weakness."

"If you reveal publicly any little weakness, it can affect your team's ability to believe in you in the toughest spot," Bayless added.

During his media availability Thursday, Prescott was adamant that Bayless was wrong, and that "being a leader is about being genuine and being real."

Other high-profile individuals across the world of sports came to Prescott's defense and commended him for his bravery while lambasting Bayless for his take.

Though Bayless didn't respond to the backlash from his comments, his employer — FOX Sports — condemned the remarks as "insensitive" and applauded Prescott's "tremendous courage" in publicly discussing his depression and anxiety.

The network wrote that they discussed the issue with Bayless, but it remains to be seen if the commentator will face further repercussions moving forward.