NSW Sports Minister Stuart Ayres has shot down plans to call one of stands at the new Sydney Football Stadium “The Garrison” – but insists no decision has been made on calling it after rugby league Immortal Arthur Beetson.

Venues NSW and its so-called Heritage Trust have come under heavy fire for snubbing the two-time Roosters’ premiership-winning captain on one of the stands at the $850 million arena. 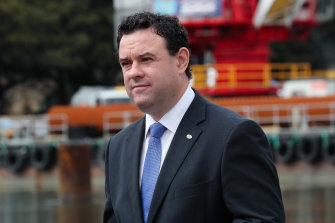 While the names of rugby league legend Ron Coote, Socceroos great Johnny Warren and former Wallaby Sir Nicholas Shehadie deserve their place, the decision to call one stand “Garrison” in reference to the British Army troops who used the precinct in the 1850s has been widely condemned.

Reports surfaced earlier today that the state government had stepped in and renamed the stand after Beetson, but Ayres contacted the Herald to insist this wasn’t the case.

He did reveal, however, that the “Garrison” name had been rejected.

“I have told Venues NSW that we won’t be accepting the recommendation that one of the stands be called ‘The Garrison’,” Ayres said. “I will now meet with Venues NSW to discuss the next step. I have no intention of going one by one through these names. We will sort out who the final set of names will be and will announce them properly and in a dignified way that’s reflective of the people and their contribution.”

It would surprise if Beetson was not named instead, although Ayres revealed he had told Venues NSW to come up with six potential names for the stadium.

It opens the door for the likes of female sporting icons such as Betty Cuthbert and Marjorie Jackson to be honoured, as well as the likes of rugby league supercoach Jack Gibson and those from other codes.

“We will increase the number of names recognised at the venue,” he said. “We have naming capacity for eight, which I think is overkill, but six is absolutely doable. Two on each side, and one on either end. Given everything that’s happened, I’m not going to dawdle on this. I don’t have to reinvent the wheel here. It doesn’t look like there’s been a lot of interaction or guidance last year.”

Heritage Trust chairman Maurice Newman has come under heavy fire for his role in the grandstand fiasco, having said Beetson “didn’t make the cut” because he’s a “Queenslander”.

Hailing from Roma, Beetson played most of his career in Sydney and represented NSW 18 times before the State of Origin concept was introduced for interstate football in 1980.

The stadium is due for completion later this year with the round 25 clash between the Roosters and South Sydney set to be the first match played.