ST. LOUIS — The final thing the Boston Bruins saw before leaving their locker room at Enterprise Center was a keepsake from eight years ago. A framed photograph hanging above the exit showed Patrice Bergeron clutching a bottle of Champagne, his mouth open in delight, as Brad Marchand, standing to his right, held the Stanley Cup aloft.

The memento, subtle as a cannon blast, reminded the Bruins not only of the predicament they faced on Sunday, but also that they had conquered it before. The last time the Bruins secured the Cup, they erased a three-games-to-two deficit in the finals against a team that had never won a title.

They earned an opportunity to do it again after forcing a Game 7 Wednesday in Boston by way of a 5-1 victory against the Blues, silencing a frothing St. Louis crowd anticipating the team’s first championship in its 52-year history. The Bruins are seeking their seventh, and first since 2011, when Marchand and Bergeron, same as now, were part of a fearsome core that overwhelmed Vancouver.

Marchand scored the Bruins’ first goal on Sunday, on a five-on-three power play. Another member of that nucleus, David Krejci, assisted on the laser by Karson Kuhlman — in the lineup for the first time since April 30 — that soared past Jordan Binnington to extend the Bruins’ lead to 3-0. Zdeno Chara, the Bruins’ captain since 2006, added an empty-netter.

The best player on the ice — as proffered by defenseman Charlie McAvoy, with the conviction of a prosecuting attorney — was Rask, who didn’t play a minute of the 2011 playoffs but, after losing in the 2013 finals, has spent the intervening years demonstrating why he is one of the league’s best goalies. Coming within eight minutes of his third shutout of these playoffs, Rask stopped 28 of 29 shots — including 12 across four Blues power plays — to deflate St. Louis, the team and the city. Facing elimination this postseason, he is 3-0 with a .953 save percentage.

“He’s allowed us an opportunity to play in a Game 7,” Coach Bruce Cassidy said of Rask. “I think the whole hockey world loves a Game 7, so it should be a great night in Boston and may the best team win.”

Back on the morning of Jan. 3, when the Blues ranked last in the 31-team N.H.L., there seemed a better chance of 20 wombats reaching the Stanley Cup finals than of that best team potentially being the Blues — let alone Enterprise Center hosting the home team’s potential clincher.

The day dawned bright and warm, and blue-clad fans tottered around downtown until those final few hours before face-off, when they clogged nearby streets. Clutching beers in glasses shaped like the Cup, they wore snappy T-shirts — “Stanley, we’d like you to meet Gloria,” a reference to the Blues’ peppy victory anthem — and toasted their good, and foreign, fortune of watching hockey in June.

The Blues observed the mayhem from the safety of their bus, escorted by police, en route to the arena from their hotel. They heard the honking and the “Let’s Go Blues!” chants. As they prepared for the biggest game in franchise history, the Bruins, loaded with players who have played many of those, gathered in their locker room. Bergeron, a Bruin since 2003, had something he wanted to say.

“It was exactly what we needed — it was,” McAvoy said. “It was an element of what the dream is. Growing up, every one of us shares the same dream and kind of just bringing us all to a point where we can all be on the same field. We were all a little kid once and we all wanted this bad. And I think it was just an element of savoring this moment and not letting it end tonight. It was exactly what we needed. He stepped up. When he talks, you listen.” 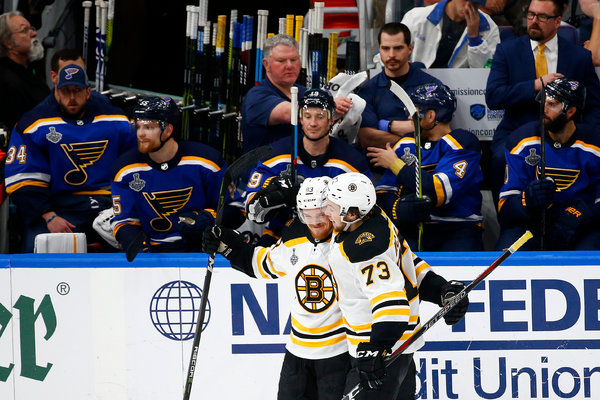 By the time they skated onto the ice, the arena — already buzzing from the final rendition by the longtime national anthem singer Charles Glenn, who is ceding duties to focus more on his multiple sclerosis — pulsated with every hit. All series the Blues have tried imposing as much aggressiveness as the rules allow, but Brayden Schenn’s boarding call on Joakim Nordstrom — followed by Ryan O’Reilly’s delay-of-game penalty — awarded the Bruins’ lethal power play 58 seconds of five-on-three time.

It took just 21 seconds for the Bruins to convert, with Marchand one-timing David Pastrnak’s cross-ice pass into the open side of the net at 8:40 for his first goal since the empty-netter that clinched Game 1.

The Bruins confronted elimination once before in these playoffs, in the first round, when they defeated the Maple Leafs in Toronto before capturing Game 7 at home.

“I just remember the mentality, the kind of ‘screw it, let’s just go out and play hockey,’ ” defenseman Torey Krug said.

Krug’s thrust — that they play with purpose, unencumbered by the stage or the moment — was more difficult early for Boston to adopt live. The Blues’ larger forwards still overpowered Boston in its defensive zone, and the Bruins struggled at the face-off circle, losing 37 of 63 over all.

Still, they maintained their 1-0 lead and had an excellent opportunity to double their advantage early in the second, when Danton Heinen, sprung by a stretch pass from McAvoy, skated in alone on Binnington but fanned on the shot.

As St. Louis surged, the Bruins’ composure lapsed, giving the Blues two power plays — and nearly the tying goal. If not for McAvoy, who swatted the puck out of midair after Alex Pietrangelo’s backhander crackled the post and sneaked behind Rask, Jaden Schwartz would have been positioned to jam it in.

Both of the Bruins’ second-period penalties were for tripping, which they fervently believed should have been whistled on Tyler Bozak in the third period of Game 5, a noncall that produced the Blues’ decisive goal. Coach Bruce Cassidy said he thought it would be easier for the Bruins to regroup because they, at least, had a chance to tie the score — unlike in Game 3 of the Western Conference finals, which the Blues lost after a hand pass led to San Jose’s overtime winner.

The Blues’ resilience, cultivated all season, guided them to three straight wins against the Sharks — and three more in this series. The fourth remains tantalizingly close.

“Listen,” said Blues Coach Craig Berube, “if you told me four months ago we were going to be in the Finals in Game 7, I think I’d take it.”

They have won twice at TD Garden this series, but now they must go there and solve Rask and a team loaded with experience in these situations. After all, the last Game 7 in the Cup finals came eight years ago, and as the photograph shows, the Bruins knew how to win then, and they surely know how to win now.