Home » Stroman Dominates for Eight Innings in Win Over Rockies

Stroman Dominates for Eight Innings in Win Over Rockies

DENVER — Marcus Stroman pitched eight innings of one-run ball and made a dazzling defensive play, catcher James McCann threw out Trevor Story as he attempted to steal second for the final out and the Mets beat the Colorado Rockies, 2-1, on Sunday.

J.D. Davis delivered an R.B.I. single and Jeff McNeil had an R.B.I. groundout for the Mets (7-4), who have won five of their last six games, including two of three at Coors Field this weekend.

Stroman (3-0) allowed three hits and struck out five. He also helped himself with a spectacular backhand play to start the eighth.

Stroman, the nimble right-hander, shuffled quickly off the mound to his right and reached behind his back with his glove to snag Josh Fuentes’s grounder. He threw off-balance to first, and the ball rolled the final few feet into Pete Alonso’s glove just before Fuentes got to the base.

“It was all reaction, to be honest,” Stroman said. “I work in the weight room to keep my athleticism and when I’m out there, I just kind of let everything flow. I thought I was going to catch it. I didn’t know and once I felt it in my hand, I already had my momentum going toward third.

“And I figured rather than just stopping and planting, I figure just get it over there as quick as possible. It worked out perfectly, and he made a great stretch to get him.”

The Mets have had to overcome a series of interruptions this season, including seven postponements because of weather and coronavirus protocols.

“Pitching and defense, you do those two things well and you’re going to be able to win a lot of games.” Mets Manager Luis Rojas said. “I think we’re doing it well for the most part right now. But I think the more games we’ll play and the more we’re able to get out there, with the weather, the guys are going to be playing better and better.”

Charlie Blackmon had an R.B.I. single for the Rockies (4-12), who have lost eight of nine.

Edwin Diaz earned his second save with a scoreless ninth, getting the last out as Story was tagged out by shortstop Francisco Lindor on the throw to second from McCann.

Antonio Senzatela (1-3), who beat the Mets in his two previous starts against them, had another strong outing. He went six innings and gave up two runs on five hits. He struck out four and walked none. 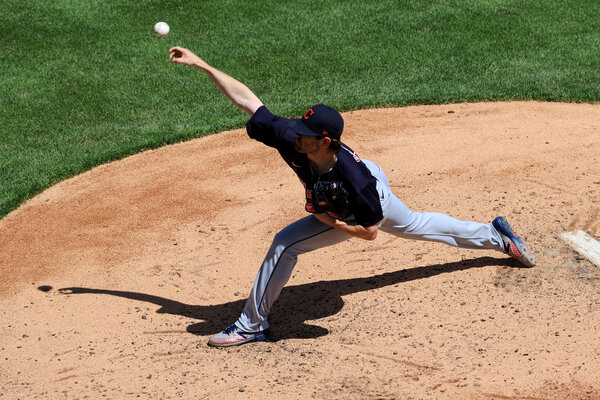 If Shane Bieber felt a bit off at the start, it sure didn’t show.

Bieber kept up his record strikeout run, fanning 13 and pitching Cleveland past the Cincinnati Reds, 6-3, on Sunday.

Bieber (2-1) became the first pitcher since at least 1893 to begin the season with four straight starts with at least 10 strikeouts.

Bieber, the winner of last year’s American League Cy Young Award, has 48 strikeouts this year, matching Hall of Famer Nolan Ryan for the most through the first four starts of a season. Bieber has fanned at least eight in 16 straight starts, one short of Randy Johnson’s major league mark.

“I felt a little slow, a little sluggish at the beginning of the game but was able to get through it and kind of get on a roll there at the end,” Bieber said.

Bieber struck out the side in the seventh. He wrapped up his outing by fanning three more in the eighth around a solo home run by Tyler Naquin, his former teammate.

“That’s why you call guys aces. And he certainly has lived up to that,” Cleveland Manager Terry Francona said. “He’s really accountable for what he needs to do. It’s nice, you got a tough night like you had last night, and you see him running out to the bullpen. That makes you feel a little better.”

“He’s the complete package as a pitcher,” Reds Manager David Bell said. “He has it all. He deserves all the credit today. We got a few runs off him but not enough.”