The Super Netball season is on a knife-edge after new COVID-19 cases in South Australia forced the league to abandon its plans for an Adelaide hub.

In an effort to keep the competition going, teams have been asked to relocate to a hub in Queensland – the fourth relocation in less than a month for the Swifts and Giants.

As a result of a recent outbreak in South Australia, a condensed version of the Super Netball season will now be played out of Queensland with all eight teams set to play out of a hub in the Sunshine State.

Originally, the Giants were due to fly from Adelaide to Brisbane on Tuesday, but were forced into isolation after being linked to an exposure site in Melbourne.

The Victorian and the Queensland governments have since revised the natyure of the exposure site, with the Giants cleared to travel on Wednesday afternoon.

“It’s so challenging,” Netball Australia chief executive Kelly Ryan said in frustration on Wednesday. “I don’t think anybody would ever have expected this would be the case and the scenarios that we’re facing in 2021.

“Last Thursday, we made that decision based on the facts we had right in front of us at that particular time. Adelaide was considered a really good option for us just due to the nature in which they’ve handled coronavirus and the limited impact the coronavirus has had in the Adelaide market.” 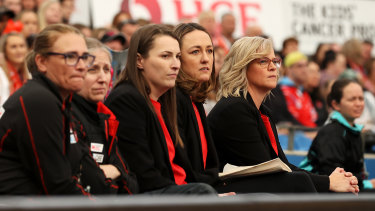 NSW Swifts coach Briony Akle (right) has been left in isolation in Adelaide after being identified as a close contact. Credit:Getty

In another hurdle for the league, Swifts coach Briony Akle and the team’s physio have been left in Adelaide and forced into isolation after being identified as close contacts of patrons who attended an exposure site in Melbourne last week.

Akle and the physio have young children accompanying them. Assistant coach Bec Bulley will step up to coach the Swifts until Akle can join them.

Kelly said the league was considering delaying the season, but was conscious of the international netball calendar with the Diamonds’ playing commitments starting in October.

There are three regular-season games left in the Super netball season, plus finals, and officials are considering stretching the season beyond the original August 29 grand final date.

“We’re really conscious that we have a Diamonds campaign that we also need to prepare for and we need to give our players the space to return home, have a rest before they can even consider entering into the Diamonds campaign and squad,” Ryan said.

“Everyone had to work through it in various situations and scenarios last year and that was really tough, and we all thought we would be through it and that elite sport and entertainment and all these wonderful things and our lifestyles would certainly have been corrected again for the course of this year, so it hasn’t been that way.”