Home » Sport » Teenage Ballers Can Cash in Earlier Than Ever. But at What Cost?

Teenage Ballers Can Cash in Earlier Than Ever. But at What Cost?

In February, Ramses Melendez, who goes by RJ, announced his college decision in a video posted to his social media accounts. A 4-star forward in the class of 2021, Melendez followed a typical formula for the video: a highlight reel and then a jersey reveal. He strayed from the script for a moment, though, when he acknowledged in a voice-over that “it wasn’t easy to make this decision.”

A couple of months later, an unusual phone call made that decision even more difficult.

On the other end of the line was Timothy Fuller, a former college basketball coach and the director of recruiting for a new league, Overtime Elite. Backed by investors ranging from the Amazon founder Jeff Bezos to the Nets All-Star forward Kevin Durant, Overtime Elite aims to be an alternative to college as a path to the N.B.A. for high-level high school basketball players as young as 16.

Fuller had seen Melendez play, and he wanted to offer him a spot in the nascent league. Fuller told Melendez that Overtime would help him prepare for the pros. Fuller also told Melendez that, unlike college, the league could pay him.

Melendez declined to reveal a dollar figure during a recent interview at Rucker Park in New York City, where he was preparing to play in the Omni Elite tournament. But he did say that it was in line with Overtime’s other announced deals.

In May, Overtime signed Matt and Ryan Bewley, twin brothers in Florida who are rising high school juniors, to two-year deals reportedly worth at least $1 million apiece. The league has since signed another set of Florida basketball twins for an undisclosed sum, and its leaders have said that it will eventually acquire 30 players who are each making a minimum annual salary of $100,000.

“The money was nice, but it wasn’t the most important factor in my decision,” Melendez said. “I want my next step to get me ready to play in the N.B.A. I asked myself: What’s the best way to get there?”

This year’s N.B.A. draft, whose order was announced last week with Detroit landing the top pick, isn’t likely to feature any players from the newest alternative paths when it takes place on July 29. But the 2022 draft will be a different story, and players and coaches from middle school to college have taken notice — and taken action.

For top-flight high school basketball players, recruiting has often been a high-wire walk without much of a safety net. These teenagers have to discern the trustworthiness of college coaches who text and call them relentlessly, promising playing time and a sure path to the pros. And they have to be wary of boosters and agents and other unscrupulous characters who often offer money and benefits that run afoul of N.C.A.A. rules and the law.

Now the best men’s players also have to decide whether it’s worth it to forfeit their college eligibility by turning pro during or immediately after high school.

Because of the N.B.A.’s so-called one-and-done rule, American players must be 19 years old and one year removed from their high school graduating class to be eligible to be drafted. But no rule says they must attend college during that year. These new leagues are hoping to lure top players away from the N.C.A.A. with something colleges can’t match: a salary.

In addition to Overtime Elite, there is also the N.B.A.’s own elite developmental team, the G League Ignite, which pays top players far and above the salaries for the G League’s regular teams. There is the Professional Collegiate League, which is backed by former Obama administration officials and aims to place 96 players on eight teams this fall. Those players will be compensated up to $150,000 each and receive a lifetime academic scholarship.

And there are also overseas professional leagues, from Australia to Europe to China, pursuing American high school stars.

“Before it was just, ‘What college am I going to?’” said Samson Johnson, a center from New Jersey who has committed to play for Connecticut in 2021-22. “Now there’s a lot of leagues, and it’s hard to keep up with all this new information. How can you be sure what’s real? It’s risky.”

Among top prospects, the G League Ignite team has become the most attractive alternative to college. The G League enjoys the N.B.A.’s backing, and it also has proved it can develop N.B.A. draft prospects.

Last year, the Ignite team inked the 5-star guard Jalen Green to a $500,000 contract. Despite playing a shortened season because of the coronavirus pandemic, Green is still considered a top-five pick for this year’s N.B.A. draft in July.

Seeing other players succeed in the G League was part of the reason Scoot Henderson decided to graduate from high school early and sign a two-year, $1 million deal with the Ignite. 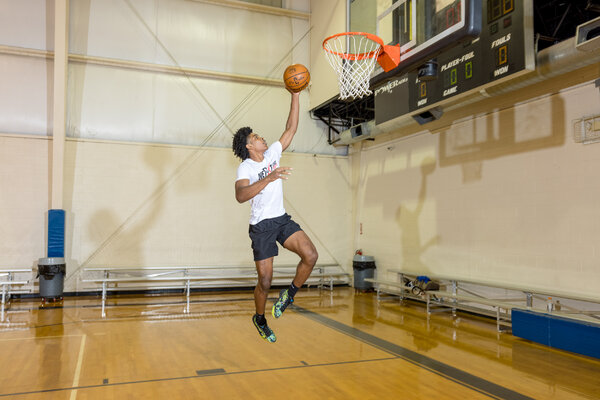 Henderson had garnered interest from a professional league in China, from Overtime and from just about every college basketball powerhouse in the country.

His decision came down to college or the Ignite team, which offered money, competition and the opportunity to sign endorsements. Despite some scattered progress on names, images and likeness reforms, it remains unclear whether N.C.A.A. athletes will be able to sign endorsement deals this year.

“I wanted to be myself, and I wanted to own myself,” Henderson said. “With the G League, I get to play at a high level every night. I can also run camps and sign autographs and sponsor products.”

Henderson had an added benefit while weighing his options. His A.A.U. coach, Parrish Johnson, is a longtime friend of Ignite Coach Brian Shaw.

But not every elite high school player is so lucky. The N.C.A.A. doesn’t allow high school players to have contacts with agents, so they have to rely on the advice of coaches and family members who are not often familiar with the nuances of professional athletic contracts.

Darrell Miller’s son, Brandon, is a top-15 prospect in the class of 2022. Whenever Darrell learns about a new league, he pulls out his laptop and starts Googling. Sometimes he’ll find himself with a dozen tabs open as they’re waiting at the airport for a flight to another A.A.U. tournament.

“The scary part is: You just don’t know,” he said. “These are start-ups. They look really nice. They have the coaches. They have the board members. But then you get this feeling: What if? What if that check doesn’t clear? What if my son’s stock drops? If you’re a professional athlete, you’re not allowed to make the same mistakes you can as a college kid. If you choose the wrong college, you can transfer. If you choose the wrong pro league, what’s your backup plan?”

Some high school and A.A.U. coaches, who are often players’ closest confidants, are also uncomfortable with their roles.

“Your biggest nightmare as a coach is to push a kid in a certain direction and have it not work out,” said Vonzell Thomas, who coaches the A.A.U. team Southern Assault. “Then for the rest of that kid’s life, whenever he thinks of you, he’ll think: That’s the guy who screwed up my life. You never want your name to come up when a kid gets asked why he didn’t make it.”

Melendez discussed the Overtime offer with his parents and coaches. They looked at the contract together. Ultimately, he decided to turn the league down and stick with his decision to play at Illinois. It felt, for now, like the safer decision.

“I said no because I’ve heard some N.B.A. players talk about how they regret not playing in college,” he said. “I don’t want to find myself in that situation. I didn’t want to wake up next year and feel like I’d made a big mistake. These leagues may turn out to be great opportunities, but I want to be able to see some history first. I want to make sure it works. These decisions change your entire life.”