Home » Sport » Teofimo Lopez Has No Lack of Confidence, or Championship Belts

Teofimo Lopez Has No Lack of Confidence, or Championship Belts

There were no fans providing atmosphere when Teofimo Lopez’s arm was raised in victory on Saturday night in Las Vegas. Nevertheless, the result electrified the boxing world.

Lopez, 23, had won a unanimous decision over Vasiliy Lomachenko, widely considered one of the best pound-for-pound fighters in the world, if not the best. He had unified the W.B.A., I.B.F., W.B.O. and Ring lightweight titles.

The undefeated Lopez, who grew up in Brooklyn, in the Sunset Park and Bay Ridge neighborhoods, discussed boxing, confidence and what he has learned from parkour.

How did you get started in the sport?

My father took me to Red Hook, Gleason’s Gym, when I was real young. When I was 2 years old, my father put gloves on me. He was training himself for amateurs, the Golden Gloves.

How old were you when you first actually got in the ring and tried to hit another kid as hard as you could?

I was 6. Yeah, they’re not doing that anymore.

Did Covid-19 affect your preparation for the fight?

No, not at all. Despite wearing masks and dealing with the protocols, everything felt the same. Until Saturday night, fight night. Definitely that was different. You don’t hear a big crowd. It doesn’t feel as big. 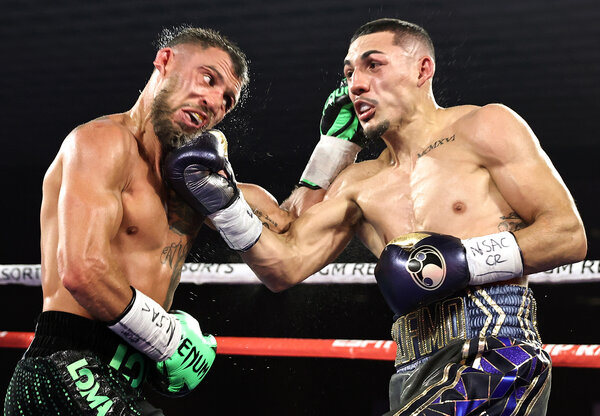 In prefight interviews, you were very confident. How did you go into a fight that challenging and yet have so much confidence?

What may separate myself from the rest is that when I say I believe in myself I really mean it. In my head, it already played that I beat you. All I have to do is display that when I have the opportunity. I’ve always had this confidence.

Once you got in the ring, did it go the way it played in your mind, or did he have any surprises? Especially for the first half of the fight, he almost couldn’t touch you. Is that what you expected?

No. I was disappointed. Everybody was speaking so highly about this guy, I wanted to see it for myself. But when I got there it was the total opposite. I don’t take anything away from the guy. But he played our game. We took him into our game plan. Whatever they had in mind, we took away his blueprint.

In the second half of the fight, he got some shots in on you. Did he hurt you? Did you feel he was turning the tables?

No. I wanted to lure him in. It was going to be a boring fight. I didn’t want it to be that type of fight. I wanted him to slowly progress into his comfort zone, and that way I would find more openings when I needed to. We knew he wasn’t going to hurt us. He’s too small of a guy.

A lot of what I took from him was from head butts. I got cut in the last round. It’s annoying. When you’re an orthodox fighter facing a southpaw, you’re going to clash heads, but a lot of them felt intentional.

It was just baiting him in. Making him feel like he was doing something. I took advantage. I started hitting him to the body. I started moving a lot more. Had he started from the start, it would have been worse for him. I would have knocked him out. It would have been a longer beating for him.

Your trademark celebration is a back flip. You get a lot of height. Did you teach yourself that?

The gainer that I do — a back flip off one leg — I learned that from some parkour guys. They would do it with a spin and stuff. I said: Listen, can you just teach me the basics? I’ll do the basic one. Parkour guys are real cool. I busted my butt a few times, but who doesn’t trying to do things like that? But now I’ve perfected it.

I try to play it like W.W.E., bounce back and forth on the ring and then do my signature move.

This interview has been edited and condensed.