Home » Sport » The Daytona 500 Champion Isn’t Surprised He Won, Even if You Are

The Daytona 500 Champion Isn’t Surprised He Won, Even if You Are

Michael McDowell had been racing in NASCAR for 14 years, with precious little to show for it. The Daytona 500 on Sunday was his 358th career start. In each of the previous 357, he had finished someplace other than first.

Sitting uncharacteristically close to the lead on the last lap as Sunday night passed into early Monday morning, though, McDowell benefited when the leaders collided, starting a chain-reaction crash. For just an instant, he surged into the lead. But it was the right instant: When the yellow caution flag came out, the racers’ positions were locked. In an instant, and without leading for a single lap, McDowell won the biggest race on the NASCAR calendar.

McDowell, 36, spoke with The New York Times about the race, its shocking finish and how it feels to know he’ll never be a dark horse again.

The following interview was condensed and edited for clarity.

It’s the last lap of the Daytona 500. You have two guys between you and the checkered flag, and they are crashing in front of you. What do you do?

It was Brad Keselowski and Joey Logano and I going to the checker. We had such a good run going, I felt like we were in control of the race. I knew Brad was going to make a move, so Brad and I got together. We had a big run coming to Joey. Brad made his move, and Joey blocked it. One went left, one went right, and I just drove right through the middle. 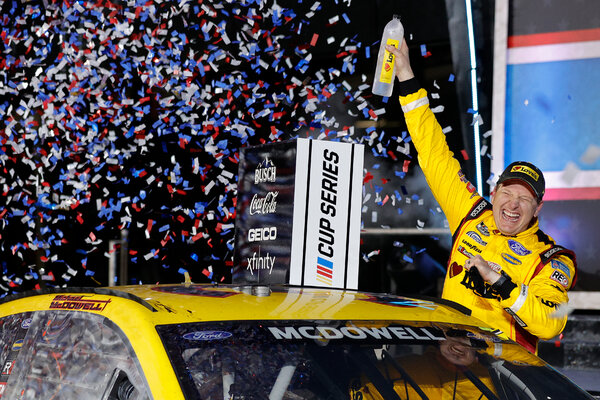 What were your chances if there hadn’t been a crash?

You’re coming to the end of the Daytona 500. Nobody’s going to stay in line. I knew that Brad wasn’t content to finish second and let Joey win the race. And I knew that Joey wasn’t content to let Brad win. So I felt like I was in a great spot, no matter what, even if there wasn’t the crash. I knew that Brad was going to make a move on Joey, and my plan was to come off Turn 4 when he made that move and stay glued to that car. When he made that move, I was going, hopefully, to be able to make my own race-winning pass and snooker both of them.

When people are crashing around you in such an important moment, do you have to remind yourself not to back off the throttle, which might be your first instinct in a dangerous situation?

Right, you can’t lift. Because you are coming to the line, you know once you let off at all, you’re done. Once you make that run, you know you have to stay committed to it.

People who might not follow NASCAR regularly might think: Wow, some dark horse just won the Daytona 500. What a fluky deal. Do you feel it was?

You know, it’s not a quirk thing. Daytona is a place where I’ve had some success. Obviously I hadn’t won. But I have a couple top fives and a handful of top 10s at the track. So when I go there I feel like I have an opportunity to be in the conversation and potentially win the race.

But I do understand, I mean, for the millions of fans that might not regularly watch NASCAR, this is my first win and we’re typically not the favorite to win that race, obviously. It’s not offensive to me. When I come back here next year, I won’t be looked at as the dark horse anymore. I’ll like that.

Who did you feel had the strongest car? Denny Hamlin, who led 98 laps and finished fifth?

What he’s been able to do with only a handful of teammates is very impressive. He’s very strong, and the other Toyotas were working together and they were making big moves at the end. But he was running 12th or something there at the end and that is just too far back to have a chance.

You actually got through a big crash at the start of the race, not just the big fiery pileup at the end. Your car got some damage in that one, didn’t it? How did it drive after that?

We did have some light contact. I just brushed the wall. I hit it very square. It wasn’t something that hurt our performance. But we definitely had to execute the repairs well. My team did an excellent job. We are on the clock, so to speak, when you’re involved in an accident. You only have six minutes to make the repairs on pit road before you’re disqualified from the race. But we got the repairs done. We didn’t lose a lap.

I suppose, before this race, if anybody asked what Michael McDowell is most famous for, it would be from the millions of YouTube views of you walking away from a spectacular crash at Texas Motor Speedway in 2008. Have you given people something new to remember you by?

I hope so, but we all know that crash footage is going to live on forever.

Whether I win the Daytona 500 or crash, it’s just part of the history in the sport. The crash was obviously very significant and unfortunately it’s part of my history. But I’ve been in this world long enough now and had to persevere and grind it. I didn’t have any doubts about my ability to do the job before this week, and I mean the win just solidifies my belief that we’re heading in a good direction.

Unlike some drivers, you don’t have any real enemy in that garage area. Even Logano said afterward, “If I couldn’t win, I would prefer Michael would.” Does it help not to have enemies out there on the final lap?

You always want to have friends. But being realistic here, you know those guys you’re racing with would have done whatever they had to do to win the race. I wouldn’t expect anything different.

The history books will show that you led the final lap in this Daytona 500. But, really, you never did lead a full lap, at any point. Does that bother you?

We were only in the lead for about three or four seconds, and then the race was over. That’s amazing to me.