The Golden State Warriors Are … Alive!

TORONTO — Sometime during that third quarter, amid the whirling, sneaker-squeaking, pass, cut, shoot-from-anywhere California storm that descended on the Toronto Raptors, this thought occurred to me:

The Warriors are the vampire artistes, and that makes them more interesting than I anticipated.

One after another they fall injured and limp down the alley to their locker room only to reappear later as if arisen from the crypt. So Stephen Curry looked listless and ill and retired to the Warriors locker room in the first quarter; he returned a few minutes later to score 16 sly sleight-of-hand points and lead a crucial charge before halftime. And Andre Iguodala, who has played for so long he appears a figure out of 19th century hoops, banged his head hard on the court earlier — and at game’s end he squared and drained the clinching 3-point jump shot in the Warriors’ 109-104 victory.

Klay Thompson, who has a metronomic shooting touch, disappeared late in the game with a strained hamstring that had him hobbling as though on a peg leg. But heed the words of Steve Kerr, the team’s coach: “Klay said he’ll be fine, but Klay could be half dead and he would say he would be fine.”

Then there was DeMarcus Cousins, who stands at 6-foot-11 and 275 pounds and who can be a balletic wonder on the court. He began this season recuperating from a torn Achilles’ tendon. He returned midseason and was rounding into shape when in the first playoff series he fell writhing to the floor with a torn quadriceps.

He returned to play eight minutes in the first game of this series and looked encrusted with rust. Kerr complimented Cousins before Sunday’s game, but when he predicted we may “see him a little bit more tonight,” you shrugged off the happy talk.

Cousins, as it turns out, played 28 athletic minutes with a handsome line: 12 points, 10 rebounds, six assists and two blocks. He’s as laconic off the court as he is agitated on it, and peering through shades he declined to emote for the press horde.

“If it’s coming off the bench, if it’s starting, if it’s playing eight minutes or 40, I’m cool with whatever,” he said.

I confess that I had become bored with the Golden State story. The Warriors resembled a 16th century galleon overloaded with gold and listing to starboard. They had the best point guard of this generation in Curry, and the best off-guard in Thompson, and the best defensive player of any height in the irascible and thoroughly entertaining Draymond Green. In the seven-foot Kevin Durant they had the best player in this corner of the hoop-playing galaxy.

To add Boogie Cousins, who when healthy was a top 15 N.B.A. player, seemed an exercise in preposterous excess.

I was ready for a new narrative. The Raptors were a hard-working team from the great north that captured the imagination of this splendidly multicultural region along the north shore of Lake Ontario. (Let’s get this out of the way: The burg has better bagels than New York. And its street hoops may be better than ours too.) Last night they even had a popular American president on hand in Barack Obama, a cool cat in a black leather jacket, and the Canadian crowd gave him a great roar and chants of “M.V.P.” 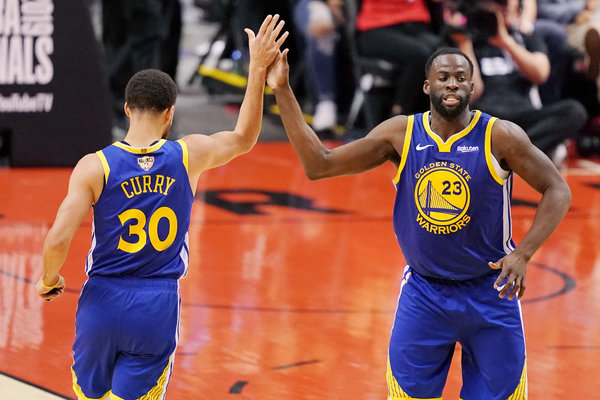 I was ready to watch the Raptors win and ready to hope that Kawhi Leonard, their succinctShane of a superstar hoopster, did not break Canadian hearts at season’s end and gallop off to Los Angeles or Brooklyn.

But the Warriors’ narrative has grown more interesting. Durant, who will be a free agent at season’s end and is rumored to cast covetous eyes at the splendidly terrible Knicks, badly strained his calf muscle and disappeared in an earlier playoff round. Other Warriors are nicked and bruised. And through it all the team has kept reimagining itself.

After dropping the first game to the Raptors, the Warriors were again on their heels last night, trailing throughout the first half. Then came that third-quarter cyclone. At one point they outscored the Raptors by 20-1; with each possession the ball whirled from hand to hand to hand, and players set picks and cut and pivoted with collective intuition. Curry floated on the perimeter where he possesses a mortar-shot jumper of near limitless range and as suddenly looped toward the hoop and tossed up shots that smooched the backboard before falling through the rim.

The Warriors are the foremost practitioners of America’s beautiful game, and when they are engaged their improvisation is riveting. But last night they reminded the Raptors that their game had a less-romantic aspect: swarming, muscular, clampdown defense of a sort that would have brought a smile to the face of Pat Riley and the bruising Knicks circa 1992.

That third-quarter run of the Warriors offered a dozen Raptor possessions that led to turnovers or blocks or hurried and off-balance shots. For the game, the Raptors shot 37 percent and coughed up 15 turnovers.

Draymond Green is master of this defensive terrain, but he was not inclined to beat his chest. “I wanted to set a tone” on Pascal Siakam, he said. But “I can’t be up here like, ‘Yeah, I took him out of the game. That’s garbage. That was a complete team effort.”

This series is still in its youth. Fred VanVleet, the Raptor sharpshooter and point guard, took the podium after the game and although disappointed he declined to rend his clothes. Maybe you, he told the reporters, expected us to make short work of the Warriors, but no one in our locker room suffered under that delusion.

Nor were they surprised to see old man Iguodala hit a game-winner. “He’s done that for that team for the last however many years, so we have seen that movie before,” VanVleet said.

He added, “We understand what this team brings and what type of effort it’s going to take to beat these guys.”

Fair enough. As the Raptors fly west, you just hope for their own sake that they pack hammers and wood stakes.