Home » Sport » The Raptors Won Game 4 and Are 1 Win From an N.B.A. Championship

The Raptors Won Game 4 and Are 1 Win From an N.B.A. Championship 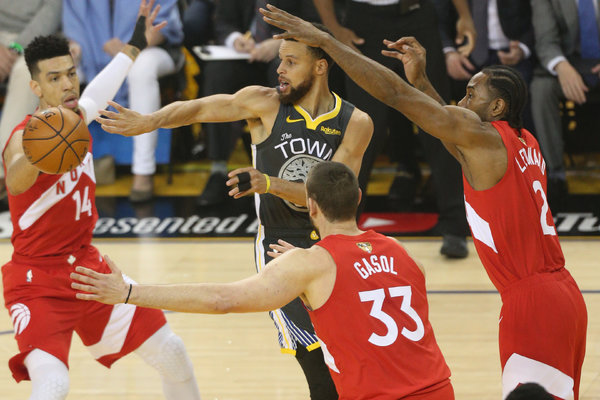 Here’s how the Raptors beat the Warriors in Game 4 of the N.B.A. finals:

The Raptors lead the series 3-1. Game 5 is Monday in Toronto.

Golden State making a last-ditch effort here. Curry hits a 3 to cut this lead to 8 with less than three minutes left. Of course, on the other end, Green commits a silly foul far away from the basket. Siakam hits both. Back to a double-digit lead.

The Warriors are essentially going to have to play perfect basketball for the rest of the game to win. The talent is certainly there to do that. A 10-point lead with 5 minutes is doable, but the Warriors have to lock in.

4th Quarter: It’s getting out of control.

Steph Curry with an absolute defensive blunder there leading to a wide open Danny Green 3 and now the Raptors are up 15. That might’ve been the ballgame right there. Those are the kinds of mistakes that happen when you are tired.

4th Quarter: It’s not looking good for the Warriors.

I might regret saying this, but it doesn’t feel like the Warriors have a comeback in them tonight. Raptors up 16 with less than 9 minutes left. Leonard with another 3.

An inadvertent elbow to the face by Shaun Livingston left VanVleet bleeding from below his eye. He was able to get up and walk to the locker room on his own.

Update: The N.B.A. later announced that VanVleet received seven stiches but did not sustain a concussion.

Kawhi Leonard, after a couple minutes of rest, re-enters the game in the 4th with less than 10 minutes left. The Raptors survived with him out, and still lead by double digits. That’s huge.

The Warriors are in some serious trouble right now. Toronto role players are finally hitting their jumpers and the Raptors have extended their lead to 12. Leonard is heating up.

3rd Quarter: Draymond Green was asking for this one.

There are two players who consistently get officiated in a beneficial way that no other player gets: Draymond Green and James Harden. Harden with creating contact. Green by yelling at referees. That technical on Green, which was long overdue, could be a huge deal later given how close this game is.

Steph Curry hits two free throws to cut the lead to one. The Raptors seem to be getting some momentum now. Curry seems frustrated out there with Toronto not letting him get any open looks. He’s only shooting 5 of 13 from the field.

ARE YOU NOT ENTERTAINED?! BLOCKS. STEALS. DEFLECTIONS. 3-POINTERS. This is, as they say, the good stuff. The Warriors are clinging to a two-point lead right now (58-56).

3rd Quarter: Something nice to say about Cousins.

Credit where credit is due: Cousins came out strong in the second half. Active hands on Leonard when he drove the lane, forcing a bad shot followed by an and-one giving the Warriors some breathing room. Plus a forced jump ball right after.

Wow, looks like we’re in for a fun second half. Leonard and Curry exchange three pointers and the lead goes back and forth. Golden State might want to whip out one of its big-time third quarters right now. The Warriors’ season is on the line.

What N.B.A. players are saying

Let’s all breathe. It’s halftime. The Warriors up by just four, which is, honestly, very fortunate for Toronto and speaks to its resilience. Leonard has 14 points and 5 rebounds. Thompson has 14 points for the Warriors. Most impressively: Don’t-Call-It-A-Comeback Looney has 8 points. Now, Kerr has a decision to make. Do you start the second half with Cousins? He’s been rough on both sides of the ball.

The non-Leonard starters for the Raptors are right now shooting 7-22 and Toronto is down 44-40. Steve Kerr noticing this too, trapping Leonard and making him give up the ball. Raptors hanging in though.

It feels like the Warriors are up 10, yet Kyle Lowry just hit some free throws to cut this to a one possession game, 37-34 Warriors, followed by an offensive foul on Steph Curry. You have to feel good if you’re a Raptors fan.

2nd Quarter: Ibaka is coming up big for the Raptors.

Serge Ibaka providing a great counterweight to Looney off the bench for Toronto, with 6 early points, including a nice stepback in Cousins’s grill. Raptors have cut this lead to 4. Cousins is really not playing well on both sides of the ball.

All things considered, the Raptors are pretty fortunate to be only down 8 at the end of one quarter. Leonard is incredible, scoring 14 of the Raptors’ 17 points. The Warriors are getting more balance, pretty much an inverse of Game 3. Looney is having a remarkable game: 6 points in six minutes when we all woke up this morning thinking his season was done.

Man, Kevon Looney. He’s giving Kerr some much needed flexibility. He doesn’t make many mistakes and has hit a couple of buckets while playing tough defense. Looney doesn’t try to do too much, which automatically makes him more useful than Cousins right now.

Danny Green giveth and taketh away. He’s missing wide open threes that he needs to hit for the Raptors to win. Toronto scored only 7 points in the first six minutes of the game yet is just down 3. Somehow. The good news for Toronto is that Steph Curry is missing those shots too.

1st Quarter: Both teams get off to a rough start.

An absolutely brutal start for DeMarcus Cousins. Three turnovers in less than 3 minutes of play, which is fairly difficult to do, and a sloppy shooting foul. His lift still isn’t there, and his decision making is really hurting Golden State. I’ll be the first to admit that I’m no N.B.A. coach, but it is worth thinking about whether Steve Kerr should pull Cousins early. When he’s on, he can win you games by himself. When he’s not, he can lose them.

Sopan Deb is a culture reporter, writing about the intersection of politics and culture, among other topics. He covered Donald J. Trump’s presidential campaign for CBS News, and his work has appeared on NBC, Al Jazeera America and elsewhere. @sopandeb