Home » Sport » The Slog Is Over. Now a New Slog Begins.

The Slog Is Over. Now a New Slog Begins.

The players who battled for the Euro 2020 title will walk away from the tournament and right into a new season. 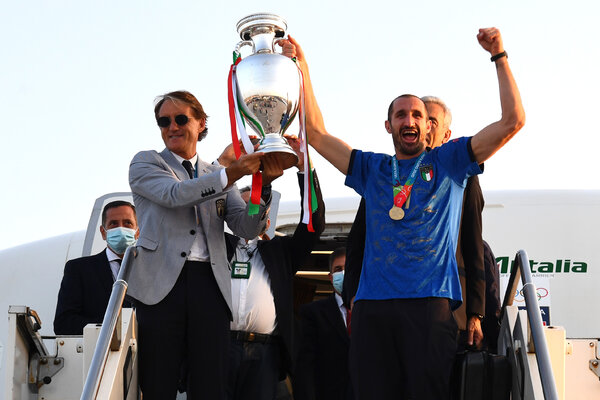 LONDON — Giorgio Chiellini and Leonardo Bonucci had a full day of activities planned. They left England in the small hours of Monday morning, and landed back in Rome together with the rest of Italy’s exultant and exhausted Euro 2020 champions not long after dawn. There, they presented the glinting, silver spoils of their campaign to their public. Chiellini was wearing a crown.

From there, Italy’s coach, Roberto Mancini, slipped away to snatch a brief moment with his family, and the players were whisked to a hotel. The team would have the morning to sleep, reporters were told, before gathering once more for a celebratory lunch.

Monday afternoon brought a full slate of appointments: Chiellini, the Italy captain, was scheduled to present his teammates to Sergio Mattarella, the country’s president, at the Quirinale at 5 p.m., and then lead them to a reception with Mario Draghi, the prime minister, at Palazzo Chigi an hour and a half later. The country’s authorities, as of Monday morning, were still exploring whether they might squeeze in a victory parade at some point this week, too.

Only once all of that is done will Chiellini, Bonucci and the rest of the players be able to draw the curtain on their season. A couple of days later, their other set of teammates — the ones with whom they spend most of their days at their club side, Juventus — will report back for the first day of preseason training.

The club is not expecting much of a turnout. As well as its two central defenders, Chiellini and Bonucci, Juventus knows that their Italy teammates Federico Chiesa and Federico Bernadeschi will be absent as well.

So, too, will the various representatives of Juventus who have been engaged by other nations over the last few weeks: Álvaro Morata, whose Spain side was eliminated by Italy in the European Championship semifinals, and the defenders Alex Sandro and Danilo, part of the Brazil squad that lost the Copa América final a few hours before Italy’s triumph. Adrien Rabiot, Matthijs de Ligt, Cristiano Ronaldo and all of the others have been given an extra couple of weeks' break, too.

They will need it. This summer’s championships — in Europe and in South America — have come at the end of a long and arduous schedule, one that stretches back beyond the start of this season, in September, to the resumption of soccer after the hiatus enforced by the coronavirus pandemic.

Many of these players have been playing, with only the most cursory of intermissions, since last June: 13 months of uninterrupted slog, prompting warnings from Fifpro, the global players’ union, various managers and, increasingly, the players themselves not only that they were being placed at risk of injury, but that their workload was too great to expect them to be able to perform at their best.

It would be comforting to think, with Euro 2020 and the Copa América — though not yet the Gold Cup in North America — now decided that the slog is over; that soccer has caught up with the three months it lost in the first wave of the pandemic, that everything will go back to normal now. In England, clubs are already planning for games with full stadiums as soon as the Premier League gets underway on the second weekend of August.

The reality is a little different. June 30 is the date that, traditionally, marks the end of the soccer year. That is the moment at which contracts expire or renew, when clubs release the players they no longer require, when one season silently turns into the next. It fell, this year, as it so often does, in the middle of a tournament. But as one season bleeds into another, the slog has only just reached its midway point. And for that, soccer has nothing to blame but itself.

The first game of the 2022 World Cup is fewer than 500 days away. The tournament, scheduled for the winter to avoid the stifling summer heat in the Gulf, is scheduled to get underway on Nov. 21 next year. Qatar, the host, will be involved in that fixture. Thanks to the delay caused by the pandemic, nobody else is even close to qualifying.

In Europe, most teams still have six qualifying matches to play; several more will have to negotiate a playoff before claiming their places. In Asia, the group stages have yet even to start. Africa, too, is not yet underway, and it has a continental championship to fit in: the Cup of Nations is slated to take place in Cameroon in January. South America’s prolonged qualifying process is a third of the way through: Brazil sits atop the standings after six games, but still has 12 left to play.

And in North America, the expanded final round of qualifying will not start until September, with teams set to play 14 games to discover which ones will join Mexico, the region’s only sure thing, in the finals next year. All of that has to fit into a club calendar already squeezed by the timing shift necessary to accommodate, for the first time and contrary to what was originally advertised, a World Cup held in the northern hemisphere’s winter.

That will force Europe’s major domestic leagues — the competitions that will provide the bulk of the players for the World Cup — to start the 2022-23 season just a little earlier, in order to allow a monthlong break right in the middle of their campaigns. But that does not mean the forthcoming season will finish any earlier: the Champions League final, the climax of the 2021-22 club campaign, is scheduled for May 28, in St. Petersburg. Once again, what little elastic that can be found will come out of the players’ chance to rest.

It is not, in fact, until the summer of 2023 that the world’s elite men’s players will have a summer to rest and to recuperate properly. Most of them, the Europeans and South Americans, anyway. There is another Cup of Nations scheduled for Africa that summer, and a further Gold Cup, too.

As ever, it is the players who will pay the price, and especially, ironically, those who enjoy the greatest success. It was hard, at Wembley on Sunday evening, not to be impressed by the composure, the calm, the obduracy of Chiellini and Bonucci, those grizzled old warriors at the heart of Italy’s defense. They have 220 international caps between them.

They have been doing this for almost two decades, now. They deserve the pomp and ceremony of an official reception with the Italian president. More than anything, though, they deserve a break. They can have one, now. But they should just make sure they are back at work in two weeks.