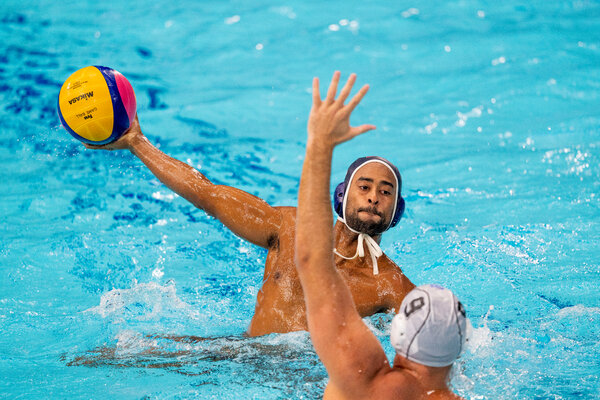 Here are some highlights of U.S. broadcast coverage on Wednesday evening and overnight. All times are Eastern.

TRACK AND FIELD A range of running finals airs tonight on USA Network, including the women’s pole vault, the men’s shot put, the men’s triple jump and the men’s 110-meter hurdles. Look out for Grant Holloway, the American who dominated the 110-meter hurdles to secure his Olympic berth in Tokyo. The action begins at 8 p.m.

SKATEBOARDING Japan has won all three gold medals so far in skateboarding. Fans can catch the fourth and final event, men’s park, at 11:30 p.m. on CNBC. The preliminary round in the event airs at 8 p.m. on the network.

WATER POLO The young U.S. men’s team, which includes several first-time Olympians, fell to Spain in the quarterfinal. NBCSN has the replay starting at 8 p.m.

BEACH VOLLEYBALL Norway takes on Russia in this replay of the men’s quarterfinal, which airs at 9 p.m. on NBCSN.

BASKETBALL Breanna Stewart scored 23 points in the United States’ 79-55 rout of Australia in the women’s quarterfinals, helping to bring the Americans one step closer to their seventh consecutive Olympic gold medal. A replay of the game begins at 10 p.m. on NBCSN. The U.S. men’s team is hitting its stride after a defeat of Spain on Tuesday. With Kevin Durant leading the way, the team faces Australia in a semifinal; the game streams live at 12:15 a.m. on Peacock and NBCOlymics.com.

CANOE/KAYAK Coverage of the final races begins at 1:15 a.m. on CNBC.