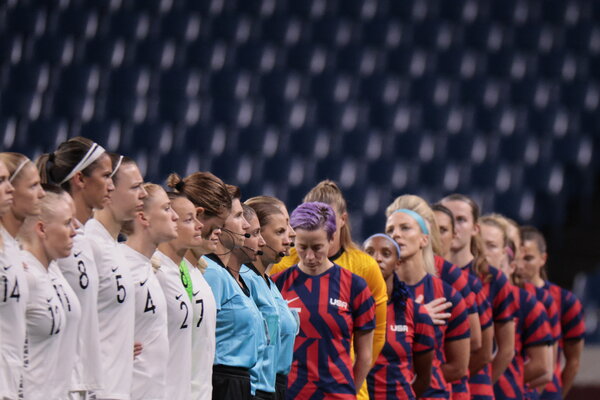 The United States women’s soccer team filed its opening brief on Friday in an appeal of their ongoing equal pay lawsuit against the United States Soccer Federation, more than a year after a district court judge dismissed the team’s lawsuit.

The news came as the team was in Japan for the Olympics.

“We believe in our case and know our value,” Megan Rapinoe said in a statement. “It’s time the U.S.S.F. does too.”

In the brief, which was filed with the U.S. Court of Appeals for the Ninth Circuit, 28 current and former members of the women’s national team argued that the effect of the lower court’s decision was to say that women can only earn equal pay to men if they work harder and perform better.

“Anyone who knows this team knows that we do not give up until we win,” forward Christen Press said in a statement.

The team is appealing a May 2020 decision by Judge R. Gary Klausner, of the United States District Court for the Central District of California. He threw out the players’ arguments that they were systematically underpaid.

The legal fight began in 2016, when five top women’s players filed a wage discrimination complaint with the Equal Employment Opportunity Commission, the federal agency that enforces civil rights laws against workplace discrimination. The players argued they were being shortchanged in several ways, including bonuses, appearance fees and meal money.