Home » Sport » ‘This will be for all of us’: Sailing gold medallist Mat Belcher to carry flag

‘This will be for all of us’: Sailing gold medallist Mat Belcher to carry flag

Belcher won gold in the 470 class alongside Will Ryan in Tokyo.

He will lead about 70 Australian athletes into Tokyo’s Olympic Stadium with many already home completing hotel quarantine due to COVID-19 restrictions.

The news was announced by AOC chef de mission Ian Chesterman at a press briefing on Saturday.

“Mat is steeped in the Olympic tradition and very successful in what he has achieved with medals at three successive Olympic Games. He is the most successful sailor in Australian Olympic history,” Chesterman said.

“Two golds and a silver over those three Games is quite something. It’s an extraordinary record of achievement, performing at this level of competition.” 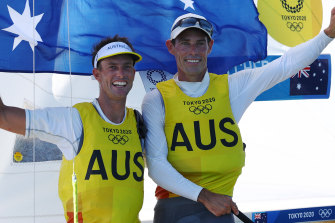 Belcher said the announcement was an unexpected surprise, and something that he would treasure.

“This has been a historic Games for all sorts of reasons and of course personally satisfying to have won that gold with Will,” Belcher said.

“I will be carrying the flag not just for those who are here but for all those now in quarantine back home or headed elsewhere. This will be for all of us.”

Belcher is a dual Olympic gold medallist, also winning the 470 class in London in 2012. In Rio, he won silver.

As the 2020 Olympics nears its close, AOC boss John Coates thanked the Tokyo government for hosting the Games on Saturday.

“We haven’t impacted, as it was suggested we might, on the Japanese public,” Coates told Games’ broadcaster Seven on Saturday.

“When we agreed with [then] Prime Minister Abe on a postponement we did it on a basis that our priority would always be the safety and security of the athletes and the people of Japan. We fulfilled that side of our bargain.”

Coates said the Games had to go ahead this year for the sake of the competitors.

“We had to do it for the athletes. They’d prepared for what became five years and you’ve seen the result. They have been able to fulfil their dreams,” he said.

Coates said he would be using the closing ceremony as a time to reflect as he prepares to retire from his role as AOC president after more than three decades in the job.

All, Be, for, of, This, US, Will
Celebrities