Tigers purr in second half to keep finals hopes alive

Richmond’s finals charge remains alive – just – after kicking 11 second-half goals to three to roll over the top of North Melbourne at the MCG, moving to ninth on the ladder, half a game behind Greater Western Sydney.

It was an unconvincing performance, but if the Tigers are good enough, they will have the chance to overtake the Giants when they meet next week. They face the flagging Hawthorn in the final round. 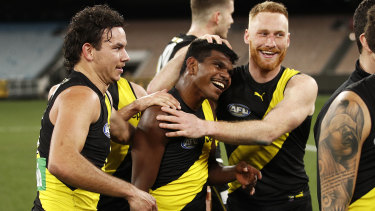 North, for their part, look better than the bottom-placed team they currently are. They are far from the basket case they were painted as early in the season. Mostly, they played with dare and purpose, and Cameron Zurhaar and Nick Larkey look better up forward by the week.

But they were unable to take full advantage of the vast amount of latitude they were given by Richmond in the first half, with Larkey spraying several easy shots to blot his game, and they became hurried and untidy as Richmond lifted their game after the break. 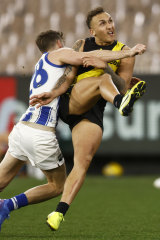 Shai Bolton gets his kick away under pressure from Kayne Turner.Credit:AFL Photos

The loss of confidence that Tigers coach Damien Hardwick has spoken of remained palpable. One bright spot was the much-anticipated debut of Maurice Rioli jnr, who chased and tackled inside 50 with intent and was rewarded in the third quarter with a deserving goal.

Time and again, the Tigers turned the ball over on the wing, only to see North switch aggressively to the centre and sweep it down-field. The old Tigers brand of extreme pressure on the ball carrier was nowhere to be seen as the Roos collected uncontested marks at will.

Rioli Jr’s efforts aside, where was the willingness to trap the ball in the forward line that would create multiple opportunities for Richmond’s forwards? Aaron Hall and Jack Ziebell were having a picnic, sweeping the ball from half-back for the Roos with ease.

There was a lack of discipline, exemplified by Shai Bolton shoving Kayne Turner to the turf, giving away a downfield free to Zurhaar, then doing it again, to gift the forward 50 metres, just when the Tigers were starting to gain some traction.

Zurhaar had already kicked the Kangaroos’ first. He didn’t need such an open invitation for a second. He had his third a minute later to extend their lead to 26 points. Centre clearances were running eight to zip North’s way, with Todd Goldstein and Jy Simpkin dominant.

Only a free kick and goal to Jack Riewoldt on the stroke of half-time, and some poor kicking by the Kangaroos – Larkey, so impressive with his marking, missing two sitters – kept the Tigers in touch.

And then the switch was flipped. Suddenly, the Tigers looked more like the Tigers of old. Toby Nankervis willed himself into the contest in the ruck, the pressure around the contest lifted, and uncontested marks for the Kangaroos dried up.

Seven goals to two for the quarter was the result. Some big names lifted, especially Shane Edwards and Bolton, while Jack Graham was the Tigers’ heartbeat: he and key defender Nick Vlastuin were among their few four-quarter performers.

But the final score flattered the Tigers, who were nowhere near it for the first half. Yes, they turned the match on its head, and deserve credit for that. But the game style that they once implemented by rote they now have to be reminded of.

Keep up to date with the best AFL coverage in the country. Sign up for the Real Footy newsletter.

half, In, purr, second, Tigers, to
Celebrities