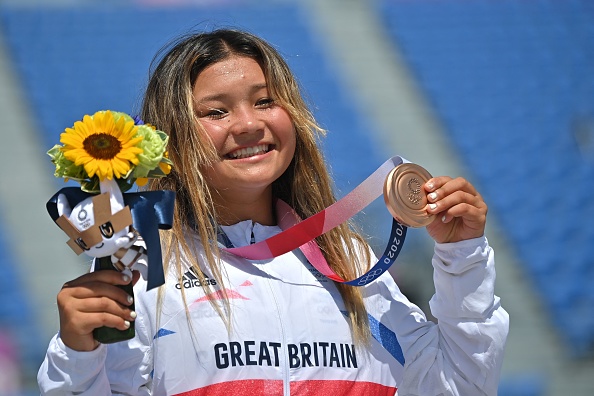 The Tokyo 2020 Olympics has not failed to deliver drama throughout and that was no different on day 12 as Team GB saw more history made, although things didn’t go all their own way.

Brown was outside the medal spots before her third and final run at Ariake Skate Park but produced a cool, calm and collected performance to drag herself onto the podium.

She claimed Britain’s first medal in skateboarding and at 13 years and 23 days became the youngest British Olympic medal winner.

Brown became Britain’s youngest summer Olympian eclipsing Margery Hinton’s longstanding record of 13 years and 43 days when she competed in swimming in the 1928 Games.

She edged her compatriot and world champion Dalilah Muhammad to beat her own time by 0.44sec to claim gold.

‘I saw Dalilah ahead of me with one to go,’ said McLaughlin. ‘I just thought “run your race”. The race doesn’t really start till hurdle seven. I just wanted to go out there and give it everything I had. I’m absolutely delighted.

‘I can’t really get it straight in my head yet. I’m sure I’ll process it and celebrate later.

‘What a great race. I’m just grateful to be out here celebrating that extraordinary race and representing my country.’

Great Britain’s hopes of defending their Olympic gold in women’s hockey were dashed after a ruthless thumping from the Netherlands.

Team GB were thrashed 5-1 by the Dutch in the semi-finals, meaning they will now only be able to claim a bronze at best.

The Netherlands will go on to face either India or Argentina in the final.

What else is happening on Day 12 at the Olympics?

There’s still plenty more to come on Day 12 in Tokyo, including on the track with the men’s 200m and 800m finals both taking place.

Team GB will not be securing a customary gold in the cycling men’s team pursuit final, they can only finish 7th, with Italy and Denmark facing off for gold and Australia and New Zealand going for bronze.

Britain will also learn their bronze medal match opponents in hockey, with India and Argentina facing off to try and secure at least a silver by setting up a final match with the Netherlands.

Medals will also be up for grabs in artistic swimming, weightlifting, wrestling, the steeplechase and the hammer throw.